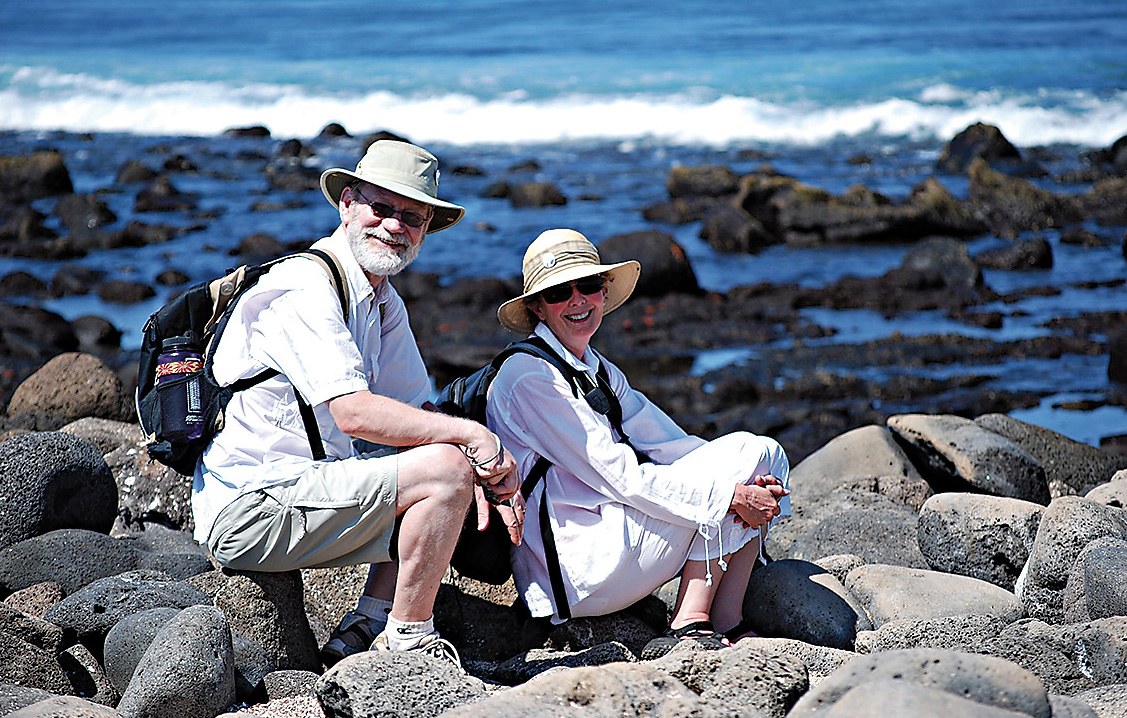 Bill and Mindy Conner have a tiger moth named after them. The naming of Utetheisa connerorum recognizes the 35 years that Bill, professor of biology at Wake Forest, has spent studying tiger moths — with Mindy at his side when he heads out into the field. “Mindy is one of my best field hands,” Bill said. “I’m cheap labor,” she said.

As a bonus, Utetheisa connerorum lives in the Galápagos Islands where the Conners have been doing research in recent years. It has become one of their favorite places on Earth. “It’s a magical place,” Mindy said. 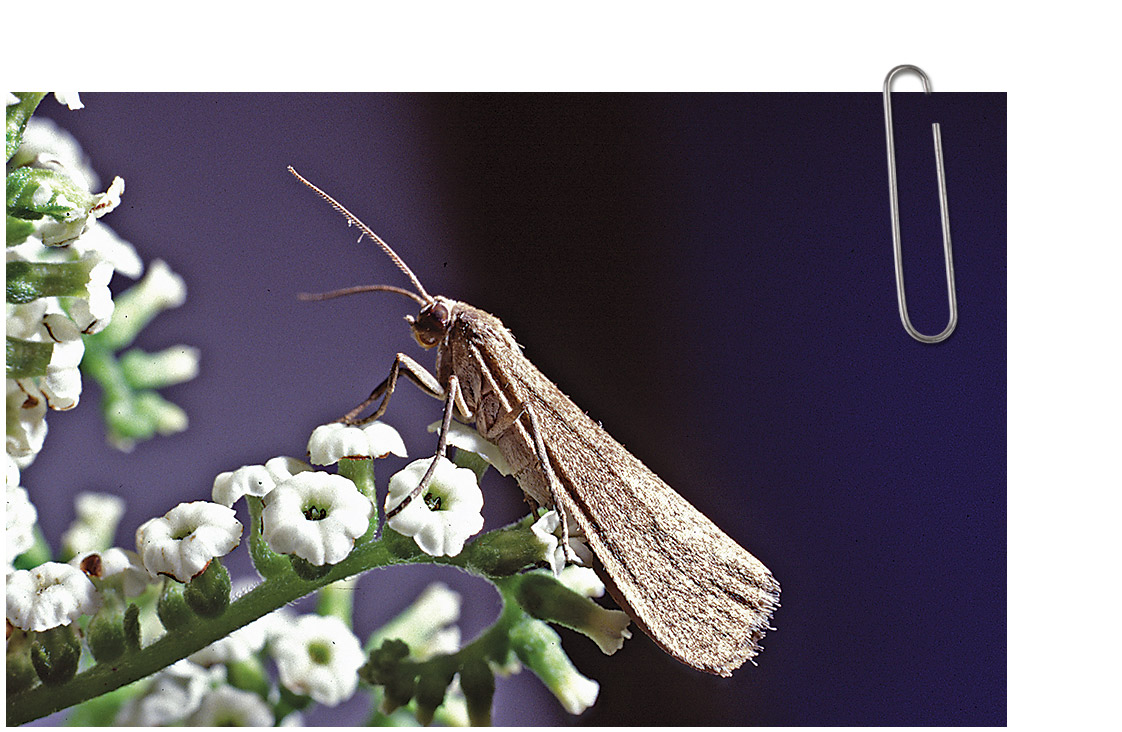 Uthetheisa connerorum, the tiger moth named for the Conners (photo by Bill Conner)

Part of what makes the Galápagos so special is that the animals — sea lions, sea turtles, penguins — are comfortable with people around, so it’s possible to do such things as swim in the ocean with sea lion pups. For biologists, the connection with Charles Darwin, who did research there integral to his theories on evolution, is another big part of what makes the islands special.

Biologists Lazaro Roque-Albelo and Bernard Landry, both of whom the Conners have worked with over the years, bestowed the honor in their 2009 paper “Two new species of Utetheisa Hübner (Lepiidoptera, Noctuidae, Arctiinae) from the Galápagos Islands, Ecuador.”

The Conners’ moth is one of six species of tiger moths that live in the islands. Tiger moths are a member of the family Actinide, which includes about 11,000 species worldwide. Bill calls tiger moths “the peacocks of the moth world.” Many have spectacular coloration, and tiger moths are known for such traits as using sound in courtship. Some can disrupt the sonar of predator bats. Knowledge about tiger moths is leading to such practical applications as technology to help people with visual impairments.

The moths named after the Conners have more subdued coloration than many tiger moths. As the Conners talked about them, “mousy brown” came up. In other ways, though, they are quite remarkable. Male members of the species have the ability to eat a plant that is toxic to other creatures. “The male makes his courtship pheromones out of the toxin,” Bill said.

Bill came to Wake Forest in 1988 and teaches courses on such topics as animal behavior and comparative physiology. His course in the entrepreneurship program looks at how animals solve problems and explores the ways those solutions could be used to develop new products and businesses. As part of his effort to spread the word about tiger moths, Bill edited — as well as wrote chapters in — a 2009 book called “Tiger Moths and Woolly Bears: Behavior, Ecology, and Evolution of the Arctiidae.” (Woolly bears are tiger moth larvae.)

The Conners met in South Florida 35 years ago when both were doing research as graduate students. Mindy was studying panthers. Having had enough of mosquito bites and bee stings as an undergraduate, Bill decided that moths were the way to go. Mindy was impressed by his willingness to head off into the field without wearing insect repellent to ward off the more unsavory bugs because it might distract his moths. Over time, Mindy let the panthers go their own way. These days, she is a freelance manuscript editor who specializes in science books and helps Bill with his field research.

The Conners have introduced the wonders of the Galápagos to Wake Forest alumni through cruise tours. Mindy had been hearing good things about the cruises, and, in 2008, when Bill wanted to head off to one of the more remote parts of the islands to do research, she decided that the time had come to experience a cruise on her own. While she and the others were sailing around the islands on a 105-foot motor sailer watching dolphins cavort and eating meals prepared by a gifted chef, she would think about her husband subsisting on rice and beans. “Every night at sunset, we would drink a toast to Bill,” she said.

After hearing details of her experience, he decided to go with her the next year, and, for 2009, they arranged a tour for Wake Forest alumni. Eleven — from 26 to 75 years old — joined them. In the mornings, a guide would take them on walking explorations of the islands. “We would fill in the biology if we knew something the guide didn’t,” she said. After lunch, they might go snorkeling.

That trip went so well they arranged another alumni tour for 2010. By then, they knew about Utetheisa connerorum, so they kept their eyes peeled. Their moth generally lives at higher elevations than those explored on the cruise tour, though, and they didn’t see one.

Although the Conners have yet to nudge anyone in the checkout line at the grocery store and say, “You know, we have a moth named after us,” they’re quite pleased. “It’s the sort of thing that a biologist appreciates,” Mindy said. “It’s a great honor,” Bill said.

Kim Underwood spent 25 years as a newspaper reporter and columnist. He is the author of “The Wonderful World of Sparkle Girl & Doobins.”