WAKE FOREST, N.C. — You can move things — books, furniture, clothes, archives. You can move people. You can even — as what would become Wake Forest University proved in 1956 — move an entire college. But history and memories linger in a place.

Fortunately, when Wake Forest College pulled up stakes in the town of Wake Forest and moved 112 miles to Winston-Salem, it left behind people who cared deeply about its history and those memories. As chance would have it, the College also left a place where that history could be preserved.

More than half a century after the move, Wake Forest found it had outgrown its original “attic” — the Calvin Jones House. Now, thanks to donations from former faculty and staff, friends, alumni and their descendants, the Wake Forest College Birthplace Society’s collection of artifacts is displayed in style in a new museum. Late last year, the Wake Forest Historical Museum opened behind the Calvin Jones House, a Greek Revival house that was the first College building.

The museum showcases items associated with the College, the town or the greater region in its continuing efforts to preserve the heritage of the area that gave rise to the University that flourishes today — and to the town that draws on that heritage as it thrives in its new incarnation.

When the Wake Forest collection first began to overflow available storage areas, Birthplace Society members considered adding a few outbuildings in the style of those that once stood behind the Calvin Jones House. They soon realized that something larger would be needed.

The solution was a 7,000-square-foot building with two fronts and no rear. The front that’s seen behind the Calvin Jones House by people approaching on North Main Street gives the illusion of being a collection of Greek Revival outbuildings like those that once stood behind the house. The front that’s seen from the parking lot between the museum building and the historic railroad tracks behind it resembles a modern train station. 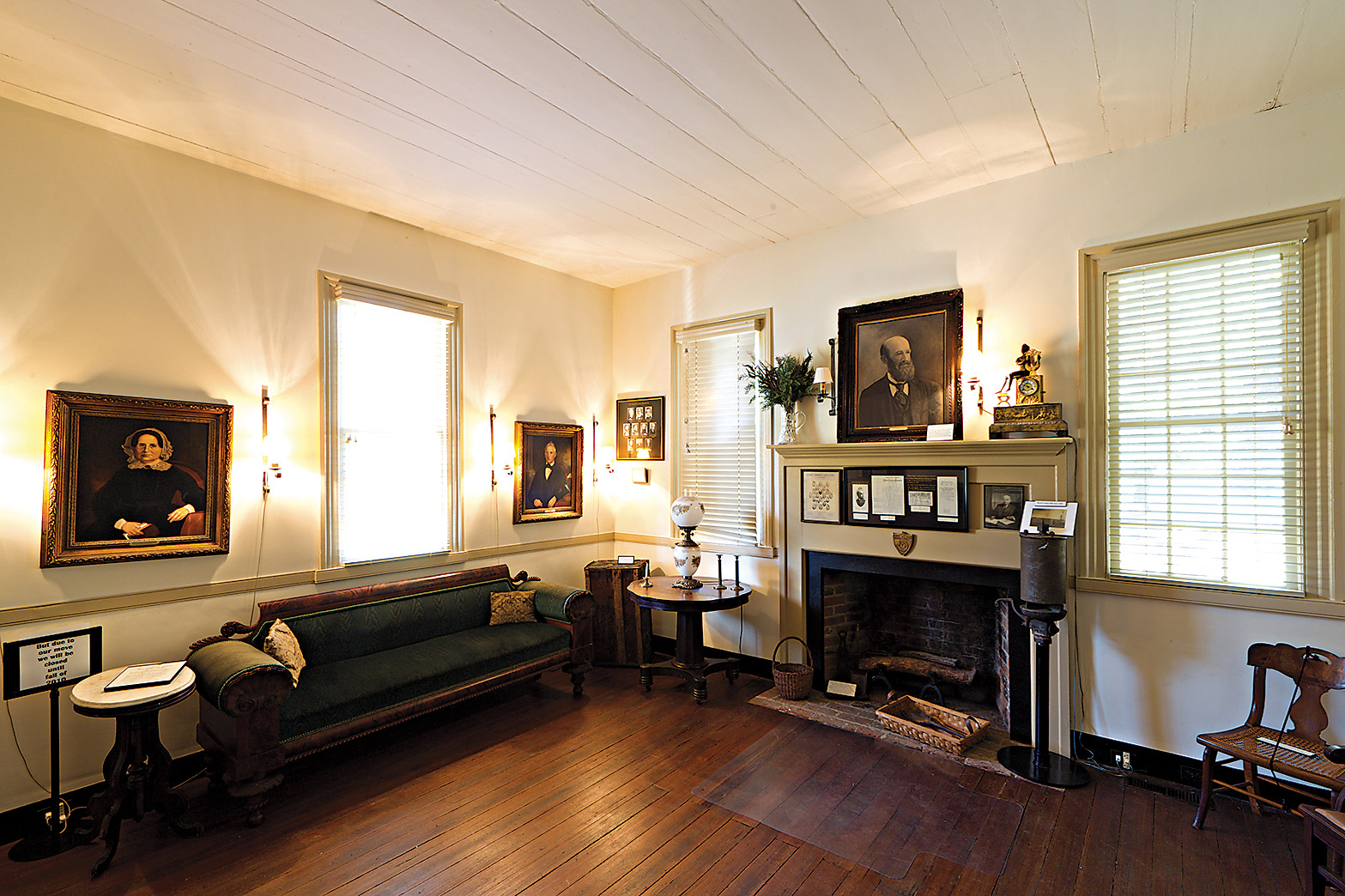 One of the seven exhibit rooms in the Calvin Jones House.

Inside, loads of memorabilia and archives once housed in the Calvin Jones House are on view, some in the spacious Wilson Reception Gallery, dedicated in June 2010 in honor of Provost Emeritus Edwin G. Wilson (’43). Other items appear in exhibits produced with a $100,000 grant from North Carolina’s Golden Leaf Foundation, a nonprofit that funds projects in historically tobacco-dependent rural communities. The museum has room to preserve and exhibit more memorabilia in the future.

In its spacious new quarters, the museum has many exhibits related directly to the College. There is the costume worn by the first Demon Deacon to take to the football field, a tradition that had instant success when Jack Baldwin (’43) started it as a lark in 1941. There are a 1950s majorette uniform and an old cheerleader sweater. A model of the Old Campus freezes the College in time, to the 1950s era known for the move and before the new owner, Southeastern Theological Seminary, made changes. Ornate chairs from the Philomathesian and Euzelian Literary Societies have their place of honor.

A “coaches’ corner” exhibit duplicates the basement office in the gym where the coaches for all four major sports shared one desk during the 1940s and early 1950s. That’s a small part of the sports memorabilia.

Exhibits focus on the medical and law schools and Wake Forest’s contributions to the North Carolina legal scene. An old microscope box attests to Wake Forest’s pioneering methods of teaching laboratory science. There’s a briefcase that belonged to Dr. Harold W. Tribble, the College president who oversaw the move, and academic regalia worn by other legendary figures.

One of the most eye-catching items on display is Mickey Mantle’s upscale golf cart. The baseball great didn’t attend Wake Forest, but his fellow New York Yankee Tommy Byrne (’41, P ’66) did. Byrne came to old Wake Forest from Baltimore as a freshman in 1937 and fell in love with the small town. He really never left, even when he was a Major League pitcher, and twice served as mayor. The golf cart was custom-made for Mantle for one of his charity golf tournaments, and Mantle gave it to Byrne. After Byrne died in 2007, his family decided that it made sense to donate the golf cart to the Birthplace Society. Reflecting the way town and gown interacted for decades, exhibits about the town and region share space with those focusing on the College and its alumni.

The area known as the Harricane, for example, might not have been talked about much in public back in the old days, but everybody knew about it as a source of illegal moonshine. Devastated by a “harricane,” the rural region that made up a large section of Wake, Granville and Franklin counties near the town never recovered. Its main source of income was the moonshine that locals made in illegal stills. When the College opened, so legend has it, the bootleggers sometimes found ready customers among the Baptist students. The exhibit shows a re-created still and demonstrates how the sellers and their customers hid bottles in baskets of produce.

Other exhibits describe such chapters in the area’s rich history as the Royall Cotton Mills, the town’s first industry, and for decades, its largest employer; historic modes of transportation; and “women who made a difference” at the College and in the town, such as Eva Belle Simmons, who, in 1888, became the College’s first female graduate, and Alley Young, a teacher who was the second woman and the first African-American to serve on the Wake Forest Town Commission.

It’s fitting that the museum brings together town and University history. A joint effort established the Birthplace Society and the museum nearly 50 years ago. When the College moved, the seminary that bought the campus planned to tear down the Calvin Jones House. The house had been the home of Wake Forest’s first president, Dr. Samuel Wait, and its outbuildings were the first College buildings. Later, the house served for years as a men’s dormitory. By 1956, it had been moved twice and was in disrepair. 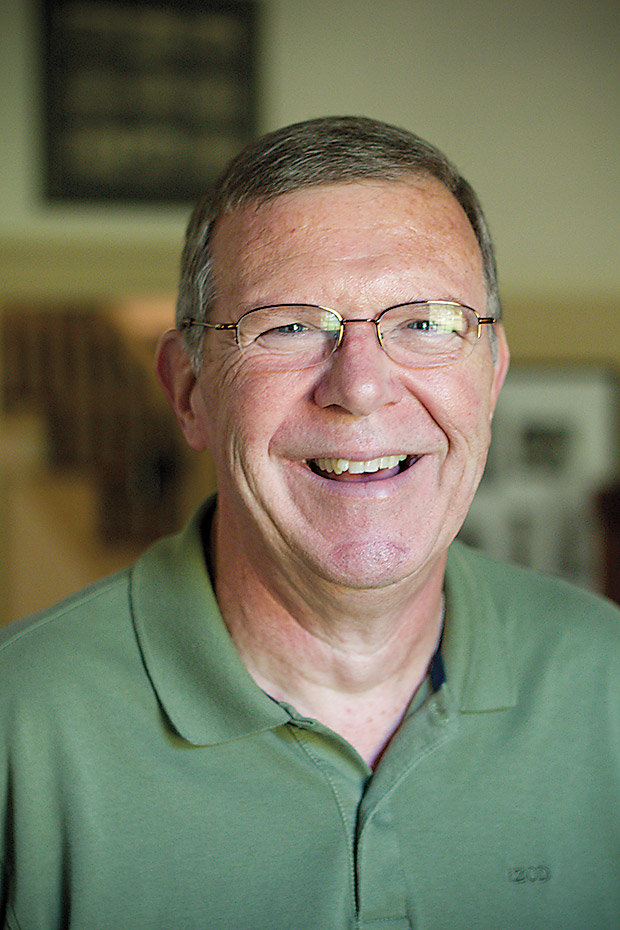 Some influential women in the local garden club persuaded the College to move the house yet again, to a few acres the College still owned on North Main Street. Forming an organization that eventually became the Wake Forest College Birthplace Society, they worked to preserve and transform the house into a museum. The late Kathleen Mackie Lake (P ’60), who had strong ties to the College, had the long-term vision “to see the house restored and furnished as a historic house,” says Ed Morris (P ’04), the museum’s executive director. Now that the museum collection has been moved to the new building, her vision will be fulfilled.

The museum and the Calvin Jones House continue as a bridge between town and gown. They draw alumni, serving as a big attraction whenever today’s students and faculty make a trek to see the “Old Campus.” And they are a favorite gathering place for the town of Wake Forest, used frequently for weddings, concerts, political rallies and other events.

A major gift in September 2010 opened up even more possibilities for that block of North Main that holds the history and memories of the long-departed college. James Wilson Mackie (’60) and his wife, Clare Frances Mackie of Haverford, Pa., gave the museum the historic circa 1860 house next door to the Calvin Jones House on North Main Street. They made the donation in honor of Mackie’s parents, Dr. George C. Mackie (’24, BS ’26) and Kathleen Mackie Lake, the same garden club member who did so much to preserve the Calvin Jones House.

Executive Director Morris and the Wake Forest College Birthplace Society want people to know that they continue to welcome donations. The society depends greatly upon the generosity of donors; almost everything in its collection was a gift, and individuals chipped in to help the town and the University pay for the new $2 million building. If an item has something to do with the College, the town or the greater region, the museum can probably use it.

The museum’s collection is a work in progress, and it will probably remain that way. It is an embodiment of the enduring history and memories of a place and of the College that grew there. And it is a showcase for the ties that still bind today’s Wake Forest University to its birthplace, across the years and across the miles.

Linda Carter Brinson (’69, P ’00) spent nearly 40 years in the newspaper business, most recently as the editorial page editor of the Winston-Salem Journal. She writes and edits from her home near Madison, N.C., and has a book-review blog at lindabrinson.com