ARCHIE AMMONS AND I BECAME FRIENDS as soon as we met in 1972 when he came to receive an honorary degree from his alma mater (he had graduated on the Old Campus in 1949, a student of my husband, Ed Wilson (’43).

When he returned in 1975 as poet-in-residence, bringing his family to live in the faculty neighborhood, the friendship included his wife, Phyllis, and son, John, (a friend of our son, Eddie) and on her visits, his sister, Vida Ammons Cox from Clarkton, N.C. We maintained the friendship in the usual ways — visits here and in Ithaca, N.Y., where he taught at Cornell University and where he invited me to teach one semester; and in Columbus County to visit his family; gifts on special occasions, and telephone calls and letters. Of course I cherish each of these ways that we kept in touch, but nothing equaled Archie’s reading his poetry, which came into my life with the friendship.

From all my memories, I choose these three of the Archie I remember.

Archie often felt anxious in public places, and his willingness to come to the campus in Winston-Salem (his first visit) took Herculean determination. (At a special event to honor some of the nation’s poets at the White House, he fled in embarrassment when he thought he had stood up at the wrong time.) But he came to a cocktail party of English faculty members at the home of Elizabeth Phillips, our next-door-neighbor and good friend. As I was later to learn, he himself did not drink, and he didn’t like parties, and he was looking for a way out.

An opportunity came naturally enough: our 4-year-old daughter Sally had called to me from the yard between Elizabeth’s house and ours, and I quickly ran down to see what she needed. As I reached Sally, I felt someone with me, and it was Archie, who had raced after me and was bending toward Sally. Together we talked quietly with her, she was reassured, and she skipped back home. Archie turned and said to me, “Let’s go with her.”

Such tenderness for children and security in the relationship between parent and child (his own mother, his son) is expressed in “Nelly Myers,” one of his most moving poems about a woman who lived with his family on the farm: Though he knows he “cannot go back,” he makes one of the great lyric verses:

And I will not forget how though nearly deaf

She heard the tender blood in lips of children

And knew the hurt

And knew what to do.

My second memory is of a morning when his wife, Phyllis, and I went to the nearby Farmers’ Market. Archie did not want to go with us, but when we came back and Phyllis was in the kitchen serving good hot coffee and her fabulous pastries, he stood in the doorway — a tall lanky man, balding, pink-faced — and read to us his poem freshly made on his old Underwood typewriter, a poem about “the merchant at market this morning.” The poem expresses one of his most enduring themes: finding the great in the small, the treasures in the rinds and peelings, cherishing “the leavings.” Without going to the market, he brought the market to us.

Finally, on a bitterly cold February morning, Ed and I, as reluctant a flyer as Archie, flew into Ithaca to say our goodbyes to Archie, dying from cancer. The Ithaca winter he had described in hundreds of poems was treacherous, the walks icy, but the sky radiant. As I stood at his bedside, Archie, ravaged by disease, looked up and smiled: “Well, look what the cat dragged in.” Archie was a funny guy.

What had I expected? Hadn’t he mocked high seriousness in “Dying in a Mirthful Place: I thought you knew propriety.”

We talked quietly for a few minutes, he asked about my mother (my father had recently died), and then we said goodbye. Early the next morning Archie died, Feb. 25, 2001, one week after his 75th birthday.

Archie was a man of enormous strength, and he took life’s suffering upon himself and found words for it. For those willing to get to know his poetry, the rewards are everlasting.

I will remember him all the days of my life, and I will always be grateful to Wake Forest for having brought us together. Pro Humanitate lives on in all our lives. 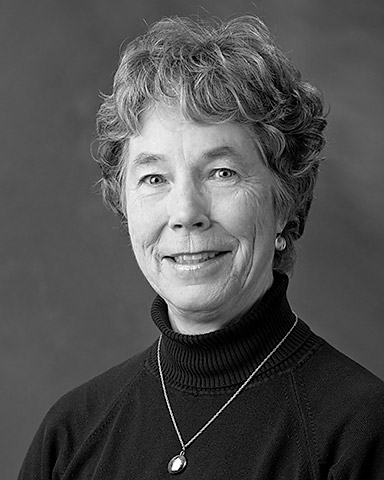 Emily Herring Wilson (MA ’62), a poet and nonfiction writer, is the author of “Becoming Elizabeth Lawrence: Discovered Letters of a Southern Gardener.” She lives in Winston-Salem. 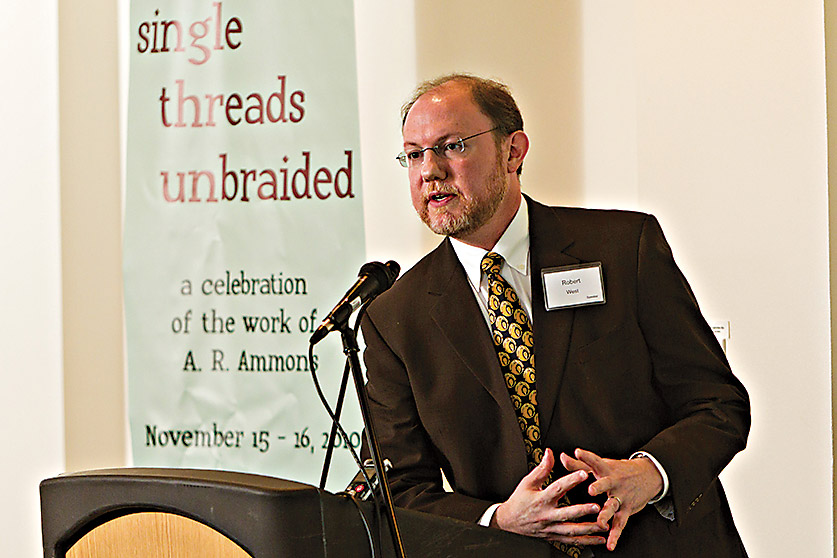 The poetry, art and letters of A.R. Ammons (’49), as well as his contributions to American culture and the arts, were celebrated in November at a Z. Smith Reynolds Library symposium titled “Single Threads Unbraided.” Ammons was a native of southeastern North Carolina, but was, for many years, the Goldwin Smith Professor of Poetry at Cornell University. He died in 2001.

Robert West (’91), associate professor of English at Mississippi State University, is assembling and editing A. R. Ammons’ “Complete Poems.” Among other things, West discussed his discovery that one of Ammons’ best-known poems, “Corsons Inlet,” has been repeatedly printed with a significant error — that is the omission of the word “of” at a crucial point in the poem. “The omission makes the passage sound like it’s saying the opposite of what he intended,” said West.

Edited video recordings of each session are available on the ZSR website, zsr.wfu.edu/ammons

For Louise and Tom Gossett

Louise Gossett, professor of English emerita at Salem College, and Tom Gossett, who was professor emeritus of English at Wake Forest until his death on Dec. 11, 2005, were the Ammonses’ near-neighbors on Royall Drive during Archie’s Wake Forest residences. Archie often sauntered over to read poems aloud to Louise and Tom, while their cat, Napper Tandy, talked in the background. Tapes of these recordings are available at the University’s library.