Victor Pauca sits at a small table with his speech therapist, who asks him what he wants to do: play with Dora the Explorer or Spiderman? No blackboard interaction here. Instead, her chalk is an iPod Touch. On the screen she shows Victor images of each toy, encouraging him to make his choice by touching the appropriate “button.” Victor, who has limited speech and motor skills, curiously eyes the screen and touches Dora. He waves his arms triumphantly as she sets the toy spinning around the table. 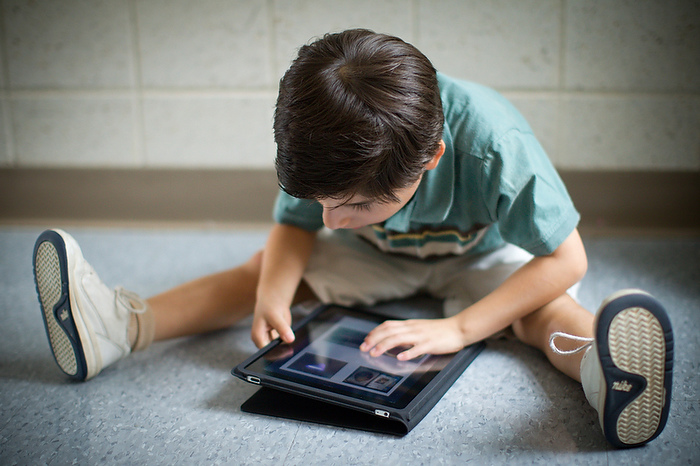 In Victor’s classroom at Winston-Salem’s Children’s Center for the Physically Disabled, dictionary-sized assistive and augmentative communication devices (AACD) with four-figure price tags have been set aside in favor of something more adaptable and less expensive: touchscreen technology. Victor’s teacher, Chris Sladky, holds help in the palm of her hand. 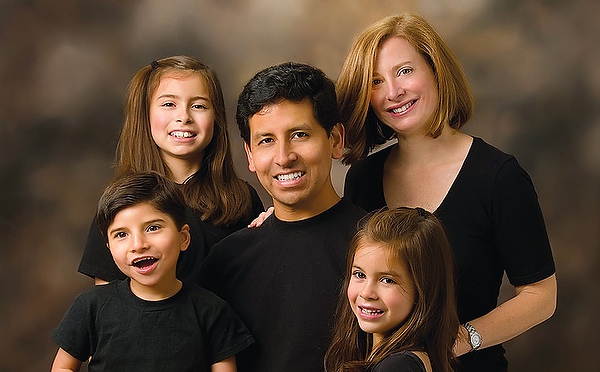 On this day Victor finds his voice through a software application based on matching images with phrases. But this isn’t just any app: it is the brainchild of his father, Wake Forest Professor Paúl Pauca (’94, MS ’96),  and his students; and it is named Verbal Victor for one dark-haired, charming little boy.

Pauca, associate professor of computer science, and his wife, Theresa, sensed something was not right with their son early on when he fell behind in his developmental milestones such as crawling, sitting, walking and speaking. At age two-and-a-half he was diagnosed with Pitt Hopkins Syndrome (PTHS), a rare genetic disorder affecting his muscle control, speech and overall development. Now 5, Victor is a curious, active child who communicates through an engaging smile, sounds and hand gestures. 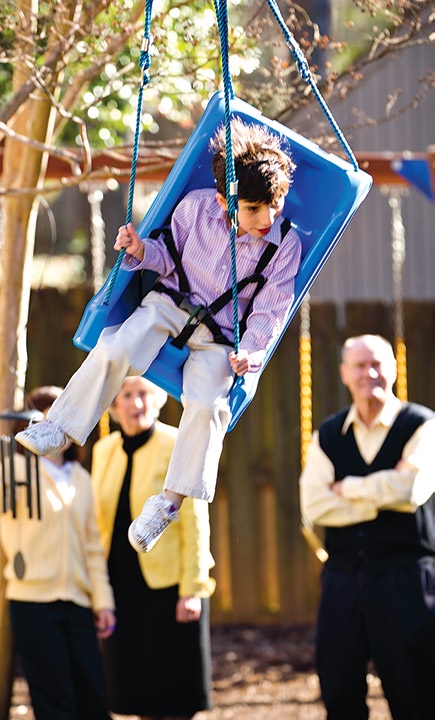 “Having your child diagnosed with something essentially ‘incurable’ is one of the hardest things a parent can go through,” says Pauca, who came to Wake Forest as an undergraduate from Peru. “It’s like going through a really deep valley where you are isolated from the rest of the world. But we pull through it with hard work and determination.” Says Theresa, “It helped us realize that happiness is a choice we make. We could choose to be bitter or to be better. We chose to be better.”

It was Theresa — a former special education teacher whose father, Reynolds Professor of Mathematics and Computer Science Robert Plemmons (’61), introduced her to the man she would eventually marry — who proposed the idea to her husband of pursuing a more adaptable, affordable AACD to improve life not only for Victor but also for others. Thus began an ongoing labor of love uniting professor, students, teachers, speech therapists and parents of PTHS children worldwide.

Pauca and his software engineering students first did their homework: what had been previously implemented and what improvements might they make? Once they found a niche they worked in two-week cycles, developing the program, sharing it with users and refining the product based on feedback. “We can do something to help many people along the way and integrate it with our students’ education. It’s a benefit for many people, not just the children.” 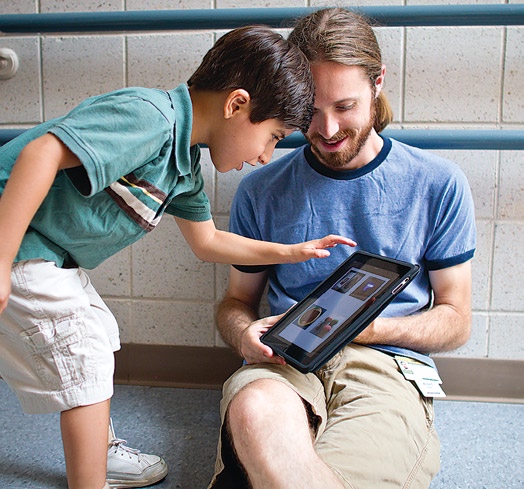 Tommy Guy (MA ’09, MS ’10), a former graduate student of Pauca’s and now a doctoral candidate at the University of Toronto, was lead programming engineer. He says the team was looking for basic functionality with a simple interface using camera and microphone to enable customization. “And we wanted it to be affordable,” says Guy, who received funding from Wake Forest’s Center for Entrepreneurship to develop a prototype including new features.

Verbal Victor has a dynamic display with customized image “buttons” accompanied by phrases that express the user’s desired action, such as “I want to eat” (a lunchbox) or “I want to play” (toys). It is simple to download on the iPhone/iPad and convenient for teachers and parents to adapt by adding pictures and recording new phrases. Best of all, it’s currently $6.99 on iTunes. As of mid-spring the app had been downloaded over 1,100 times worldwide. 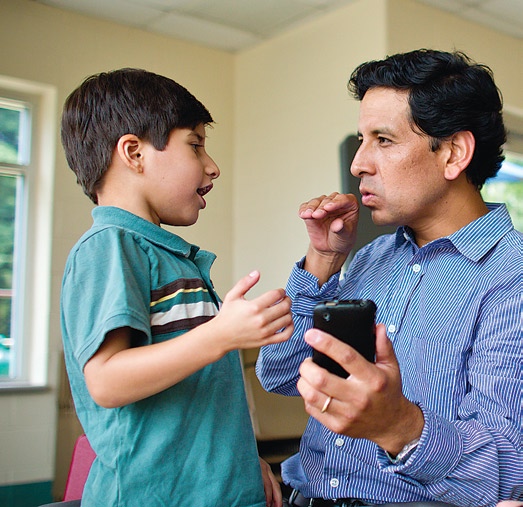 Paúl Pauca says the app has the potential to benefit many people with communication disabilities.

Pauca and team are working on a new version featuring page locking, image editing and the ability to combine buttons to make complete sentences. Developers are also looking at online button-sharing.

Pauca is researching grants to further develop Verbal Victor. His goal is to use his expertise, mobile technology and knowledge regarding speech and communication to develop better and more affordable applications for people with disabilities such as autism, Parkinson’s disease and stroke.

He acknowledges he hasn’t invented anything new; he’s just tailored something for a particular type of child. His own child. “Victor makes it easy for us because he is the hardest working kid. He has achieved things we didn’t think he could.” 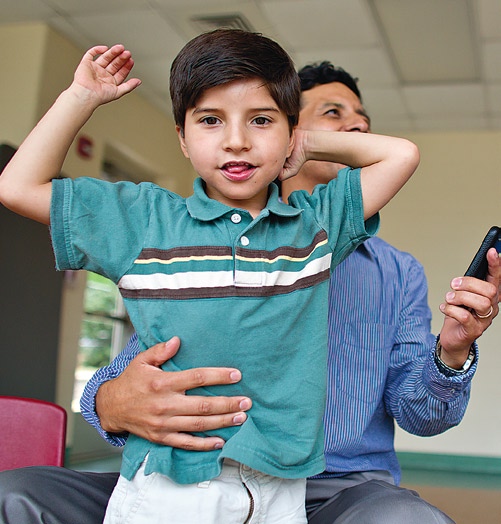 A software application helps Victor and his father, Paúl, communicate.

When Victor was first diagnosed, his parents searched the Internet and found one other family whose child had PTHS. They formed an international support group that now numbers over 100 families and counting. The Paucas organized a local faith-based support group for parents of children with disabilities, created the Pitt Hopkins Syndrome Fund under the Winston-Salem Foundation and the Pitt Hopkins Syndrome International Network. Together with other families they have raised $15,000 to fund research through 5K races around the country. The second annual Race for Victor and PTHS is scheduled for Oct. 1 at Tanglewood Park.

As the Paucas forge ahead with PTHS awareness and research, the family mission of being better, not bitter, is heartwarmingly personified in Victor’s sisters, Sofia (11) and Francesca (8). They are their brother’s biggest advocates, reading to him, playing with him and bragging about his achievements. Francesca has “cooking lessons” for him every Tuesday and sets therapy goals for them to accomplish together. 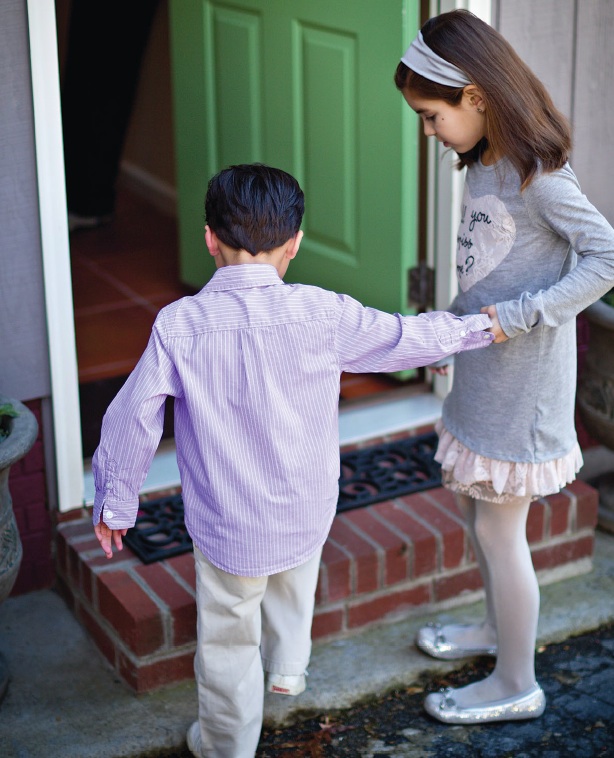 Younger sister Francesca, who is teaching Victor how to cook, helps him navigate the front steps to their home.

Once Sofia and her father were discussing genes and DNA when she expressed interest in becoming a scientist who could work on those things. Pauca encouraged her to learn more about PTHS and maybe even discover a cure.

Sofia said she would like that, but she wasn’t sure about finding a cure. “Because then,” she said, “parents might just bring their kids to me and say, ‘Fix the problem,’ and never learn the wonderful things their children could teach them.”