An R.J. Reynolds High School student who died after a football injury has inspired an incoming first-year student at Wake Forest, the North Carolina Legislature and citizens across Winston-Salem to commemorate his death.

Matt Gfeller was only 15 and playing his first varsity game when a helmet-to-helmet collision at the Reynolds season opener caused intracranial bleeding and his death in August 2008. A month later, a 16-year-old Greenville player, Jaquan Waller, also died after sustaining a head injury in a football game.

The tragedies led North Carolina lawmakers and Gov. Bev Purdue to enact a law in June aimed at protecting middle and high school student-athletes against concussions. Known as the Gfeller-Waller Concussion Awareness Act, it promotes concussion training and safety for interscholastic sports.

Gfeller was John Lineberger’s (’15) closest high-school friend, and the loss of Gfeller led John to find his own way to pay tribute.

The son of Molly Welles (’82) and Steve (’80, MBA ’82) Lineberger of Winston-Salem, John and two other friends helped start the Matt Gfeller Memorial Doughnut Run 5K to raise money for a college scholarship and research into the prevention and treatment of traumatic brain injuries.

“Once we heard that there was going to be a scholarship for Matt (at Reynolds), we thought it would be a good idea to remember him and do some type of event,” Lineberger said. “We tossed around some smaller ideas, and then we saw an ESPN show on the doughnut run at N.C. State. We thought that fit Matt perfectly. It’s something fun and different, so I think Matt would have liked it.”

The run attracted more than 1,600 participants and raised almost $60,000 in its first two years, enough to endow a college scholarship — the Matthew Alan Gfeller Memorial Scholarship of the Winston-Salem Foundation — at Reynolds. Participants run (or walk) a mile-and-a-half from Reynolds to Whitaker Elementary School, where they down half a dozen Krispy Kreme doughnuts, and then return to Reynolds.

At Wake Forest, the football program is testing new helmets that could help prevent brain injuries. Some players on the team are using helmets that have sensors — the Head Impact Telemetry System (HITS) — that measure the force of an impact and where the impact occurs on the head. The system, which is not yet available in all types of helmets, alerts trainers if a player sustains a large impact, so that the player can be monitored to see if a concussion may have occurred. 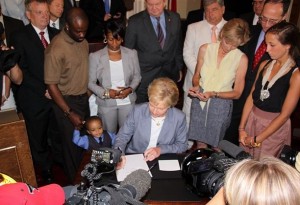 Paige Fitzgerald Barefoot (’09), senior staff associate to Folwell, worked with the lawmaker on the bill. “After Rep. Folwell and I met with the Gfeller family and doctors at Wake Forest Baptist Medical Center, we knew it was important to introduce legislation that would help prevent accidents like Matt’s from happening again in high school and middle school sports.”

The new law requires that high school and middle school students displaying symptoms of a concussion be pulled out of a game or practice immediately and be examined before returning to play or practice.

Another upcoming event in Winston-Salem will also honor Gfeller’s memory. The first Matt Gfeller Sports Spectacular, sponsored by the Matthew Gfeller Foundation, will take place on July 30 at Wake Forest’s BB&T Field. The event will educate coaches, student-athletes and parents about the dangers of head injuries and raise money for traumatic brain injury prevention, treatment and research.