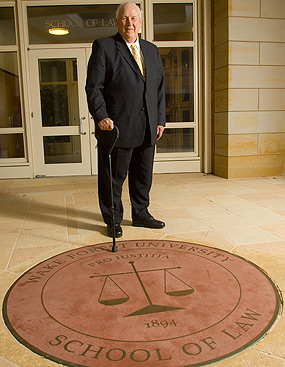 This story originally appeared in Wake Forest Magazine in 2007.

When Porter Byrum (JD ’42) received the School of Law’s highest honor, the Carroll Weathers Award, at a law-alumni banquet last fall, he probably would have preferred to be out hunting or fishing instead of wearing a suit and sitting in a fancy country club. He’s not someone who likes a lot of attention or who puts on airs. He’d just as soon talk about the three-hundred-pound Russian boar he killed twenty years ago as his career as a highly successful attorney and businessman in Charlotte.

After opening his practice more than fifty years ago to take whatever cases came through the door, Byrum spent much of his career working with only two clients, who not coincidentally became lifelong friends. He traveled around the world with one, buying and reselling airplanes. He helped the other develop one of Charlotte’s first shopping centers, which he later bought.

Byrum, 86, is only the seventh person to receive the Weathers award since it was first awarded to and named for Carroll W. Weathers (’22, JD ’23), who served as dean of the School of Law from 1950 until 1970. Although he stopped practicing law five years ago, Byrum continues to manage the shopping center from a small, nondescript basement office, decorated with the mounted heads of two nine-point bucks and the aforementioned Russian boar that he killed on property he owns near Charlotte.

He’s quick to attribute his success to the example set by his father, a Baptist minister. In 1998, he funded the John Thomas Byrum Scholarship in the law school in memory of his father, a 1908 graduate. The scholarship has supported twenty-five students since it was established. 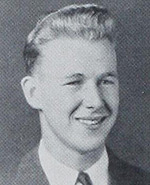 “I know that I didn’t pay my way when I went to Wake Forest,” says Byrum, who, along with three of his brothers, received free tuition to Wake Forest because his father was a minister. “Given the circumstances, my daddy never would have been able to have gotten four boys through Wake Forest, so somebody ought to pay back the debt. And it makes me feel good to do that.”

Byrum’s oldest brother, Paul (’34, LLB ’42), was a teacher in Rowland, North Carolina, before his death in 1978. Conwell “Cliff” (’37, MD ’41) was a doctor in Raleigh, North Carolina, who died last December. David (’47, JD ’51), 88, is a retired attorney in Charlotte. John was the only brother not to attend Wake Forest — he graduated from N.C. State and was an engineer and salesman for General Electric; he died in May.

Byrum was born in Forsyth County and grew up in Wilmington and Edenton, North Carolina. Growing up during the Depression, his father never had much money, so he and his brothers learned to love the outdoors. The boy who loved hunting and fishing grew into the man who began buying land in the 1950s so he’d have a place to take his dogs out on a Saturday and hunt all day. For the last fourteen years, he’s leased about 250 acres outside Huntersville, North Carolina, to the Carolina Renaissance Festival, a medieval fair held every fall that attracts tens of thousands of visitors.

In recent years, he’s donated land in Union County, North Carolina, near Monroe, for a church and two schools, Porter Ridge Elementary and High School. “It makes me feel very humble when those little kids come in and thank me for what I’ve done,” he says. “I get a feeling that I’ve done something good in the world. I think back to the sermons my daddy gave years ago about being a good steward of what you have.”

Since his father had gone to Wake Forest, it was a given that he and his brothers would, too. “Daddy had one ambition in life: to college educate his five boys,” Byrum says. “He lived to see all five of us with college degrees. When I walked out of the church there in old Wake Forest, he said ‘Son, I’ve carried you as far as I can carry you, you’re on your own.’ I remember looking at the diploma thinking how am I going to survive.”

After he graduated from Wake Forest into a world at war, Byrum sought a commission as an officer in the Army and Navy, but was turned down because he is colorblind. That didn’t keep him from being drafted into the Army, and he was soon sent to Europe. He served with distinction — once pinpointing the position of a German artillery battery that was pouring fire on American troops so that it could be destroyed — and eventually received a battlefield promotion to lieutenant.

He later served in Korea before moving to Charlotte, where he hung out his shingle, paying $10 a month for a small office in the law building in downtown Charlotte. “Everybody who knew me thought I’d fail because I vowed I’d never work for anybody else,” he says, with his characteristic plainspoken candor. “I wasn’t going to be anybody’s lackey. If I didn’t have but one client a year, at least it would be mine.”

He soon got his first client — for a divorce case — who paid him more than his new suit cost, and he was on his way. When one of his earliest clients, Jenks Caldwell, needed some help to close the purchase of a government surplus C54 fuselage, Byrum thought it sounded like a pretty good deal and put up $500 of his own money. That was the start of his fifty-year association with what became Charlotte Aircraft Corporation and his travels around the world to broker deals to buy and sell airplanes.

Another client from the 1950s would also become a longtime friend. When A.V. Blankenship developed Park Road Shopping Center in Charlotte, the first large shopping center in the city when it was built in 1956, he hired Byrum to help with the financing arrangements. When Blankenship decided to sell the shopping center in 1967, he encouraged Byrum to buy it because no one knew the workings of the business better than he did.

The shopping center, with a Harris Teeter grocery store, Great Outdoors Provisions Company, Blackhawk Hardware, and sixty other stores, celebrated its fiftieth anniversary last November. But Byrum, in typical fashion, skipped the grand celebration — he was out hunting.