The scene at O’Hare International Airport in the summer of 2007 is heartwrenching as Polish immigrant Tony Wasilewski bids his family farewell, unsure if his wife will ever be allowed to rejoin him in pursuing the American dream.

The scene was captured in a documentary, “Tony and Janina’s American Wedding,” co-produced by Steve Dixon (’82), who has spent much of the last year telling the story of one family caught up in the U.S. immigration process.

His efforts — and that of his wife, independent filmmaker Ruth Leitman, who produced and directed the film — paid off on Aug. 8, when Janina returned to O’Hare and the Wasilewski family was reunited. It was one of the best moments of his life, says Dixon, who also composed the documentary’s music.

“We really hoped this film would help this family, but we also wanted the film to be part of the dialogue on the national (immigration) debate. A lot of times a documentary will lay out a problem, but the film doesn’t affect the problem. We did change the outcome for this family, and now we hope to use their story to help others.”

The film juxtaposes the family’s personal struggle to reunite with the larger problems in the U.S. immigration system. To watch a trailer of the film, visit http://tonyandjanina.com/

The Wasilewskis were a model immigrant family for 18 years before being split up by a “broken system,” Dixon says, that granted one citizenship and deported the other to a country she barely remembered, and left their young son caught in the middle. “We’re a nation of immigrants, but we’ve turned our back on those trying to do the right thing,” he says.

Dixon has spent his life in the music business and has composed music for other documentaries made by his wife, but this was the first film that he co-produced. As a student at Wake Forest, he played guitar and sang with The Shakes, a band he helped start with several Theta Chi friends. After graduating, he played in various bands before going to work for Redeye, a North Carolina-based independent music distributor. He has spent much of the past year promoting the documentary and arranging screenings around the country.

The Wasilewskis’ story began in 1989 when the couple arrived separately — legally — in the United States and settled in the Chicago area where they met. Tony applied for U.S. citizenship. Janina took a different route, seeking political asylum from then-Communist Poland.

The couple married in 1993, had a son, started a cleaning business that once employed 12 people, and pursued the American dream. But the end of Communist rule in Poland altered Janina’s immigration status.

In one pivotal immigration hearing in 1995, Janina — who spoke little English at the time and was without an interpreter present — didn’t understand what had happened when her attorney told a judge that she would voluntarily return to Poland. When she later realized what had happened, she decided to remain in the U.S. while appealing her status.

Wasilewski kept thinking that if they played by the rules, they could “fix” Janina’s status, Dixon says. “As aspiring Americans, they felt that this is a just country, and the right thing would be done.”

But once her appeals were exhausted, Janina returned to Poland in 2007, a day before she would have been forcibly deported. The family made the difficult decision that their son Brian, then only six, would go with his mother, even though he was an American citizen. In a bittersweet moment depicted in the film, Tony Wasilewski is granted citizenship several months later.

For the next four years, Wasilewski lobbied for his wife’s return, speaking at immigration rallies and at a Congressional hearing, while occasionally visiting Poland to see his wife and son. The film and support from politicians, including Rep. Luis Gutierrez (D-Ill.), kept his case in the spotlight.

Wasilewski’s pursuit of a “hardship waiver” — proving that his wife’s deportation had caused him hardship — was approved by Citizenship and Immigration Services in July. Janina was granted permanent resident status and can eventually apply for citizenship. 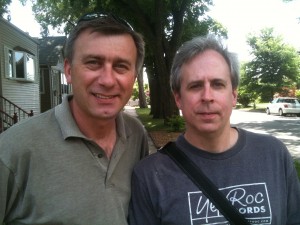 Dixon and Leitman, who live in Chicago, were at O’Hare airport when the family was reunited. They are working on an epilogue to the film, which they plan to continue showing around the country because the issues it raised about immigration reform still remain.

The film premiered last fall at the Chicago International Film Festival and has been screened at the Polish Film Festival in America in Chicago and at the Center for American Progress and the U.S. Capitol Visitors Center in Washington, D.C.

While the Wasilewskis have been reunited, Dixon will continue to push the film out to “everyday Americans” who can influence the immigration debate, at church meetings and on college campuses for instance, he says. The film was shown at Wake Forest last semester.

The film doesn’t pretend to have the answers to immigration reform. But Dixon hopes it reengages people to look beyond the media stereotypes that boil the immigration debate down to three red-hot words, “Arizona, border, Latino.”

The other side of the debate is the Wasilewskis’ story, he says. “Tony has taught me a lot about patriotism and the American dream, things that I took for granted.”

To arrange a screening of “Tony and Janina’s American Wedding,” contact Steve Dixon at steve.ruthlessfilms@nullgmail.com