After graduating from Wake Forest in 1999 and living in Atlanta as an actress and theater arts administrator, Megan Cramer moved to New York City in June 2001. “I filled my first few years auditioning for shows and doing odd temp jobs, but in general was feeling dissatisfied and unfulfilled with my creative work. I had forgotten “WHY” I was doing what I was doing,” she says. “I had lost the joy.”

In the fall of 2003, Cramer was having brunch in New York City with Wake Forest Theatre Professor Emeritus Harold Tedford; after she had vented about her creative ennui, Tedford mentioned that a former Wake Forest  student (Melissa Jones Briggs, ’03) had done an internship at The 52nd Street Project. “I loved everything he said about the organization. It seemed a perfect mesh of my love of theater, kids and volunteerism. So I checked it out, saw a show, started volunteering for them and then was on staff two years later. All because of that brunch!

What is The 52nd Street Project?

The 52nd Street Project is a 30-year old nonprofit theater company that brings kids from the Hell’s Kitchen community (also known as Clinton) of New York City together with professional theater artists to create original theater. Through a series of unique mentoring relationships, the Project strives to improve the children’s literacy, their sense of self worth and their appreciation for the arts. 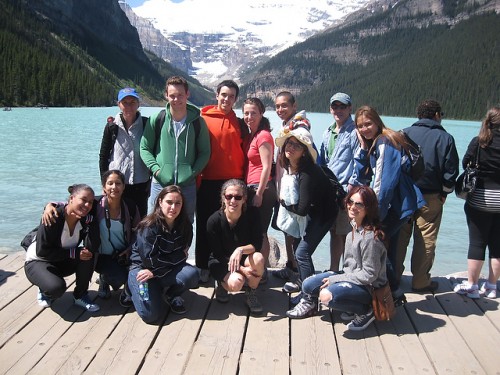 Why is it important to get inner-city youth involved in theatre?

So much of what we do at The 52nd Street Project is give kids a chance to use their own individual voice and to have a one-on-one mentorship with an adult. We are not training any of the youth to be a professional playwright or actor, but instead we’re giving them an experience of success and a safe space to exercise their voice. With the overcrowding of classes and the underfunding of arts at most schools, rarely do kids get an opportunity to have someone pay attention to them, listen to what they have to say and be able to make something that is all their own. It is a very powerful experience for a young person to have an adult help him/her write a play, have actors bring life to the characters and have it produced fully in a theater. Their words are spoken loudly and clearly, and their ideas and imaginations are championed.

The secret is that this is also a rare and wonderful volunteer opportunity for the adult professional artists that we work with. They find great joy in working with these kids and creating a piece of theater, art, film, photography or dance — or just coming after school and playing ping-pong and doing math homework with a kid.

What has it been like to take kids from Hell’s Kitchen and eventually travel with them to Canada to perform Shakespeare?

Every theater program that we do with our young people involves a trip. Our kids start with us when they are 10-years old, and we take them on short weekend trips to upstate New York, where they write plays; then later, we take them on 3-day or 7-day trips to the Hamptons, Block Island, or Cape Cod to rehearse plays that have been specifically written for them. It is always a refreshing experience to get the kids out of the city and out of their routine to focus solely on our creative goals. Many times the kids are scared of bugs, homesick, or fearful of the big waves in the ocean, but overcoming those fears of the unknown in nature becomes just as important as their overcoming their fears about performing in a play!

But it is also humbling to watch the kids advance through the program and accept the bigger challenges and fully participate in the bigger trips along the way. We took our oldest group of teens to perform Shakespeare in Canada (University of Calgary and the Banff Centre) this summer, and they found many wonderful ways to exchange cultural traditions. Whether we were at a rodeo, a historic park, a concert, or hiking up a mountain, they managed to learn about the local culture while bringing a sense of pride in their hometown and own traditions. It is that healthy mix of sense-of-self and curiosity-of-others that is fascinating, no matter where we go. In fact, I think that’s what initially drew me to theater: it highlights the human connection between disparate communities.

In a serendipitous twist of fate, this summer one of my Wake Forest friends (Kyle Haden, ’99) helped one of our oldest teens enroll in a summer seminar at Oregon Shakespeare Festival. It was a thrill to send this teen on another cross-country adventure immediately after Canada, knowing that he was prepared for this life-changing experience. 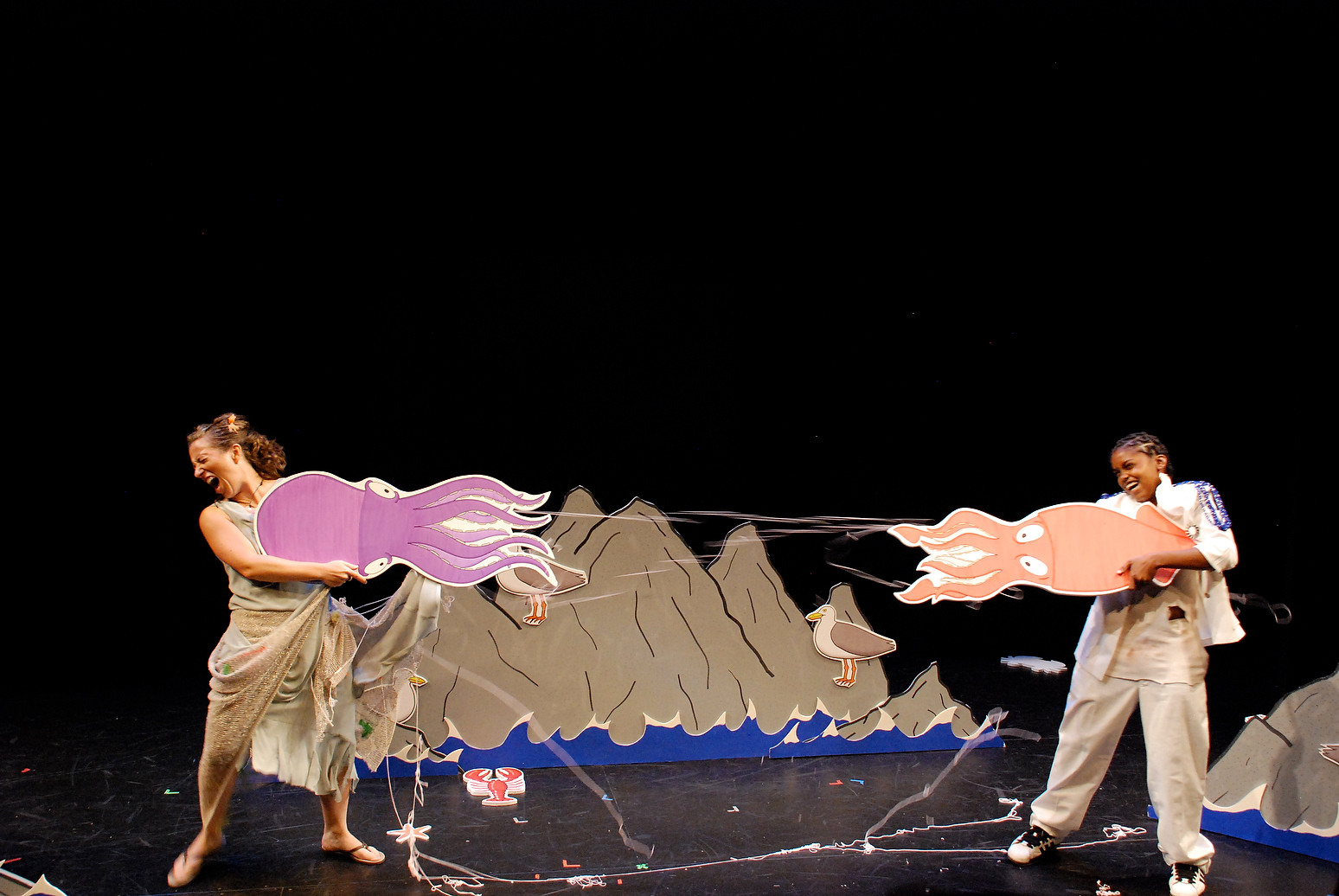 How has this project changed their lives and their perspectives? How has it changed your life and your perspective?

They speak of learning about trust, following through on commitments, and of doing things they never thought possible for themselves. I have added below a poem by Carlos Dume, one of our teens that we just took to Canada in July. We also know that our kids learn some pretty great ping-pong techniques … and an appreciation for bowling and roller skating! We hope that they continue to carry these lessons and gifts into whatever else they do.

Personally, this work has changed me immensely. I feel the two most powerful concepts that we teach our kids are lessons that I re-learn everyday. In their writing, we say that every play must have “Want, Conflict and Change.” In their acting, we ask that they be “Loud and Clear.” I figure that if I can determine what I want out of any situation, it’s worth fighting through any conflict to get it, and I will always find myself changed a bit. And if I can be loud and clear about what I think and feel and have to say, then I am doing alright!

In general, it is an empowering experience to know that each program is about each individual kid, and not about yourself. It simplifies and clarifies your expectations and brings the work back to a purer place. It has also spoiled me … because I do believe that I am working with the most talented playwrights in the world — 10-year-olds!! They come up with the coolest characters ever: an evil platypus, a half-wolf/half-polar bear, a ticking time bomb, school bullies or a prankster turtle. Their imaginations are vast, and their creative censorship is low. I learn a lot from them every day.

Could you talk briefly about your experience at Wake Forest? Were there people or classes or opportunities that influenced your career and personal paths?

I had a close group of friends at Wake, and I am constantly amazed and impressed at the diversity of interests we’ve developed and careers we’ve taken. Like at the Project, I feel Wake Forest encouraged students to explore and gain a broad range of sills and knowledge and then pursue a path that each was passionate about.

Much like my favorite thing about my current job, my favorite thing about Wake Forest was the individual attention I received from faculty. This was especially true in the theatre department, my major. With a small class of majors, we were allowed great freedom and creative license in our work, and I was able to develop the many “muscles” that I now use in my job. Anthony Aston Players, the student-run theater organization, and my directing class senior year were instrumental in helping me figure out ways to collaborate with artists, administer programs, stage productions, and thoughtfully and empathetically manage a staff in order to make the things that I am excited to make.

Would you like to one day see one of these theatre students enroll at Wake Forest?

A couple of years ago, I had a kid that wanted to apply to Wake, and I wrote a recommendation letter. The student ended up going to Drew University in New Jersey, but I admit I was excited at the prospect of his going to my alma mater!

The 52nd Street Project has a unique partnership with the University of Michigan, where they take one student a year from us and provide not only a full scholarship but also a summer bridge program to prepare them for the transition from high school to college. This arrangement works well for our kids, since we realize what a huge challenge college can be, both in the academic and social arenas. Each year, though, we are able to identify the one student that we feel has the academic and social strengths to handle a four-year liberal arts education in an institution that is far away from their home and family. I would love to see that kind of partnership with more colleges and universities, especially Wake Forest!

On top floating it’s incredible
Who would have thought the day would come
That together we touch the clouds
Above the world soaring through its air
Progressing all the way to a place above
Where in few accepted the challenge
And fewer overcame it.

No day could have predicted this one
A family has developed,
With imperfections of course
But with more power and genuine care
To create beauty than take it away.
Oh and there have been those days,
With loss after loss
Miscalculation after miscalculation
Greatness never ceases to stop radiating out of us.