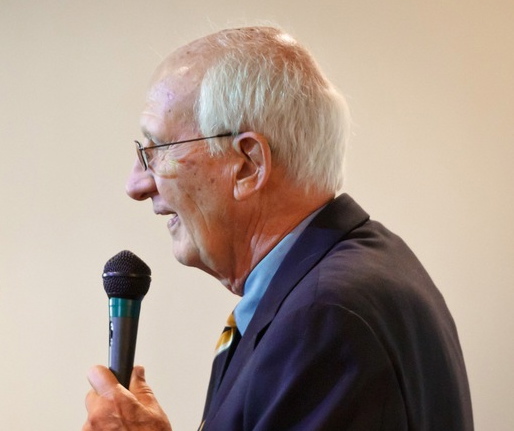 George Williamson (’61) delivered a heartwarming invocation at the Half-Century Club luncheon on Oct. 14 during Homecoming Weekend.

“God also of Old Codgers. We, Old Codgers, are connecting faces, massaging memories, revising records for the better, and offer it all up to you, who cares also for us.

We were roustabouts back then, wide-eyed, strangers to the wide world, dumb as posts, but eager with the sense of something out there for us, sensing that this little Baptist college was somehow going to help us find it. More of us were Baptists then than now, not-dancing-on-campus or up to much of anything as bad as what we’ve done since.

In your presence we remember the ones who taught us, modeling, whether we were interested or not, what it might be to be scholarly, serious about important things, what it might be to know a thing or two; teachers through whom, we suspect, you often spoke to us: A.C. Reid, knuckle-knocking the table, shaking his hoary head, blowing his sacred sigh at old Greek profundities; David Smiley teaching us to laugh at the grotesqueries of American history; Elizabeth Phillips, sassy, no-nonsense, smart as hell, teaching us way back then to respect professional women without saying a word about it; Mac Bryan, showing us by his mere skinny frame what it might have been like to live among the Hebrew Prophets; Ed Wilson, exposing the beauty of mere words when strung concisely together around astonishing thoughts; Claude Roebuck, a gentle friend who died alongside some of us — teaching some of us, of all things, how to die.

Many of us got much of what we are beneath these Magnolias; perhaps most of us; perhaps all of us. And many believe you were in on it, equipping us, nudging us toward our destiny.

God of old codgers; of Methuselah, who celebrated, at last count, his 19th half-century (at our 19th, Ed Wilson (’43) will be a thousand years old); God of Abraham and Sarah, who celebrated their second half-century by having a baby. God of old codgers with memories. Give your rich blessing to our Wake Forest. Give your warmth to our memories. But please, God; please — no babies.