I enjoyed the short article by Marcus Keely (’10) in the Fall 2011 issue (“A Sense of Direction in the Age of Uncertainty,” p. 72) and wanted to echo the sentiment and also offer up a little hope to my fellow liberal arts majors.

I too graduated with a bachelor’s in English and “no discernible skills that could be used to make a living” but have since been able to find my way into a field that I fell in love with before graduation, but for which I had no direct academic preparation.

I graduated in May of 2009 into a withering economy with bleak promise of a career in the field in which I was actually interested. After almost seven months of living at home and working at a temp job I hated, endless cover letters and a handful of painstakingly-prepared-for interviews, I remarkably landed a job in the foreign health division at Development Alternatives Inc., one of the largest USAID international development firms in Washington, D.C.

Surrounded by young professionals with master’s degrees in International Relations and years of overseas work experience, why did I, of all people, land this job? After two years, I can only surmise that it was not because I majored in International Business or Health, but because I had a hard-earned excellent academic record and a solid sense that I was intelligent and capable. Most of all, I had been afforded other opportunities outside of my major by Wake Forest to nurture my interest in international relations and foreign aid — internships, study abroad, overseas volunteering, etc. — that I could point to. 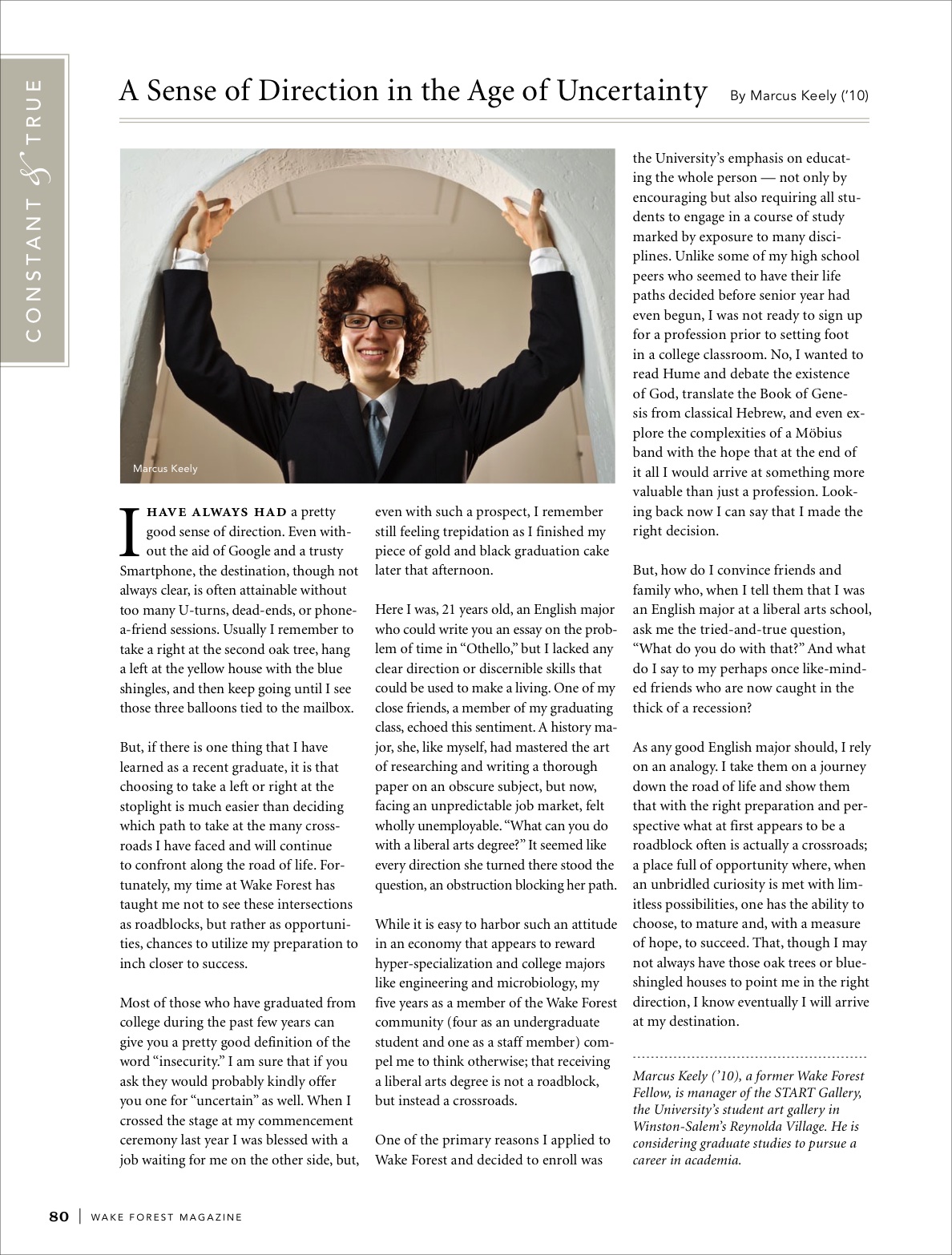 Using my own life as an example, I want to make sure students are not feeling so pressured by a shrinking economy and a hyper-educated workforce that they give up on following their true academic interests. I would not have done as well in school had I simply treated it as a vocational institution. As a person with an insatiable intellectual curiosity and a voracious desire to find that by which I am most impassioned, I can honestly say I would not be here today without having been a liberal arts major.

I recently stumbled upon an article from the The New Yorker which struck harmony with this chord. In the article, “Live and Learn: Why We Have College,” author Louis Menand, a university professor, debates the purpose of college and gives a short history of the development of higher learning institutions. My favorite part however, is one in which he explains why students majoring in liberal-arts fields score higher on the Collegiate Learning Assessment (CLA), or in other words, appear to develop and improve upon the skills most desirable to employers (critical thinking, analytical reasoning, problem solving and writing) better than students majoring in non-liberal arts fields.

For anyone else out there who graduated with a major in a “non-discernible skills” field like I did, this might be comfortably reassuring.

This Letter to the Editor was received from Nicole Russo (’09), who works in the foreign health division at Development Alternatives Inc. in Washington, D.C.