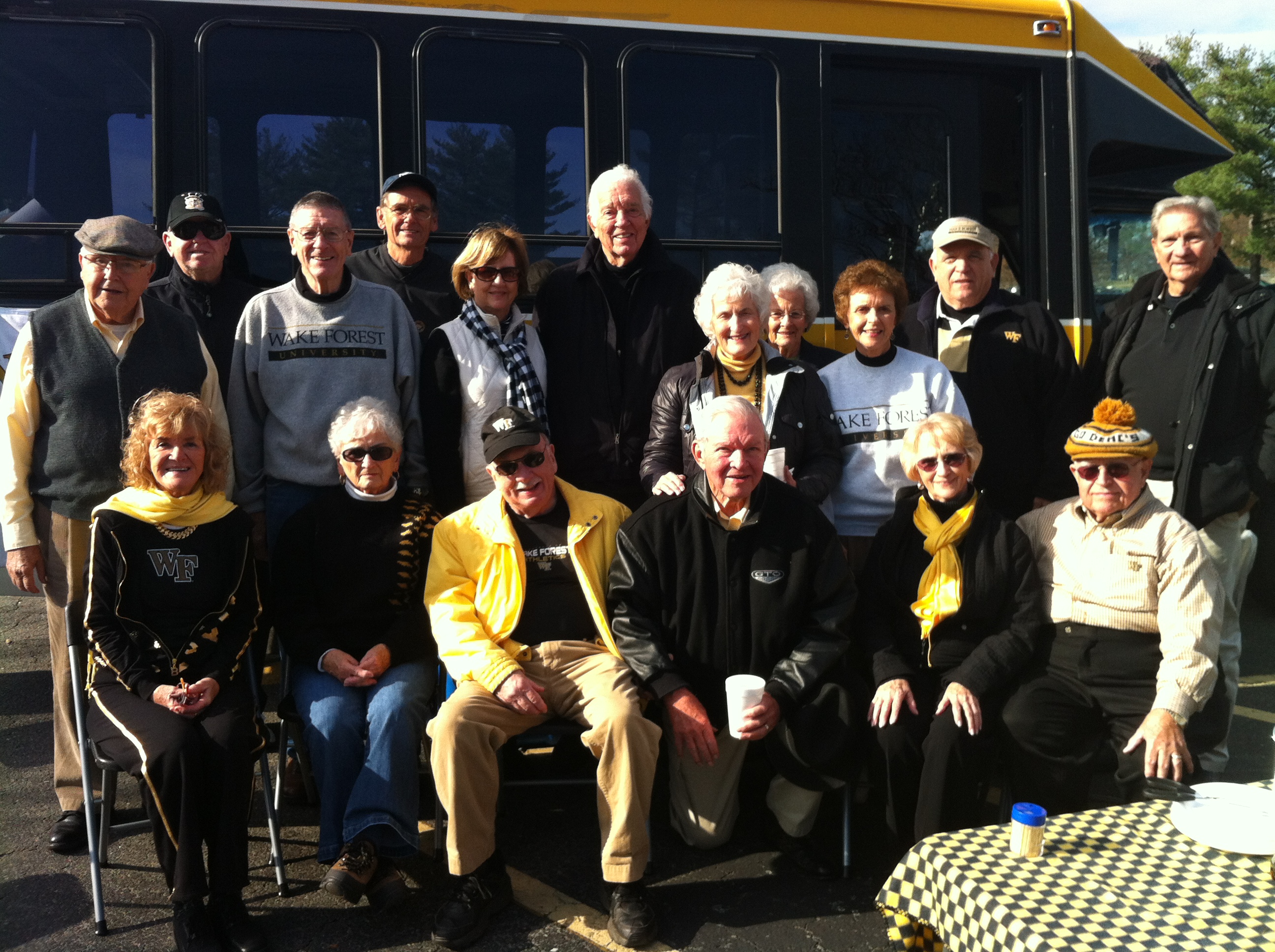 The \’has-beens\’ at a recent football game.

When Abe Elmore (’55) rolls into the parking lot at BB&T Field Saturday in his “Deac Mobile,” it’s time for old friends to gather round and give thanks for each other and for being Demon Deacons.

Elmore and his gang of self-described “has-beens” — mostly former athletes and fraternity brothers from the Old Campus — have been tailgating before games before there even was a BB&T Field/Groves Stadium in Winston-Salem. “It’s just about the camaraderie of old, old friends,” he says.

Elmore upped his game a couple of years ago when he bought a 1986 airport bus and christened it the “Deac Mobile,” complete with a “DEACMOBL” license plate. 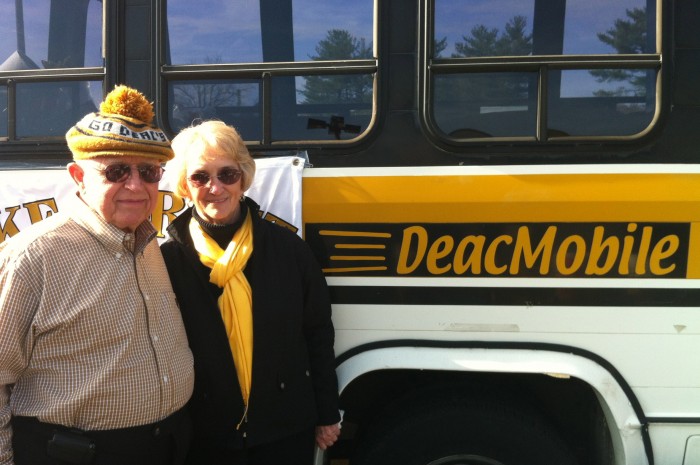 When Wake Forest takes on Vanderbilt in the final home and regular season game Saturday, Elmore, his wife, Jackie, and the has-beens will be there tailgating several hours before kickoff, just as they have been doing before most home games the last 46 years.

“When the school moved over (to Winston-Salem) in 1956, when they didn’t move back after a few years, we decided we’d better get on the ball,” says Elmore, who recounts how he and friends from the Old Campus started meeting at football games in Winston-Salem. They went to a few games at Bowman Gray Stadium in Winston-Salem, where Wake Forest played before Groves Stadium was completed in 1968.

Elmore doesn’t recall how many games he’s missed over the years, but it’s safe to say that he’s made the two-and-a-half-hour drive from his home in Dunn, N.C., to Winston-Salem for most of the Deacons’ home games the last half-century. When he’s not cheering on the Deacs, he runs a retail furniture store; he’s also a former longtime mayor of Dunn.

Before a game, Elmore sends out an email to about 150 of his closest friends asking who’s coming and who’s bringing what, so they don’t end up with too many buckets of fried chicken. Anywhere from two dozen to 50 people will show up on a given Saturday, although a big game such as Homecoming draws even more. They’ll set up black folding chairs and tables with black-and-gold tablecloths, lay out a spread of food, and reminisce and enjoy each other’s company.

The has-beens started out as a group of athletes from the Old Campus and then expanded to include former members of Alpha Sig fraternity. Elmore was a member of Alpha Sig and got to know many athletes when he was equipment manager for several sports teams. Now, any Wake Forester is welcome to join the has-beens, Elmore says.

Tailgate regulars include Jim Turner (’55), Ben Routh (’56), Maurice George (’55), Tom Ogburn (’52), Ralph Walker (’58, JD ’63) and Clarence Corbett (’57). George, a former Demon Deacon basketball player who knew Elmore when they were both students, has been a regular since he and his wife, Dot (’50), returned to North Carolina from Northern Virginia 20 years ago. He gives the Elmores credit for getting everyone together season after season. It’s all about maintaining and renewing friendships, he says. “Even though we come regularly, we’ll still see people that we haven’t seen in a while,” George says. “We really look forward to it, especially at Homecoming.”

Elmore isn’t ready to park the Deac Mobile until next season just yet. With Wake Forest heading to a bowl, he hopes the location will be close enough to take the Deac Mobile on the road for one more reunion this season with the has-beens.