When the curtain came up on the fall 1953 Wake Forest drama season, it raised on a 60-year romance for Barbara Ann Land (’55) and her future husband, John Brock (’54) — a romance with each other and with the theatre.

Barbara was script girl and John was running the light board. As the story goes, John asked Barbara out after he noticed her giving him “the eye” during the play. She claims she was not eyeballing him but the guy working beside of him. Love prevailed and they were pinned the following spring break. Barbara went on to play the leading female role in “Glass Menagerie” and “Death of a Salesman.” John entered the Army while Barbara finished her degree, and they were married the summer after her graduation.

In Fort Jackson in Columbia, S.C., where John was assigned, they both worked onstage and behind the scenes with the nation’s oldest continuing community theatre, The Town Theater. After military service, John joined the newspaper scene in Charlotte and soon became editor of a newspaper in Shelby, N.C, where he and Barbara spent the next 42 years. John and Barbara Ann Land Brock on stage together.

The stagestruck couple continued acting and directing as Shelby became a “Hollywood East” with the advent of Earl Owensby Studios bringing scores of movie productions to North Carolina, says John. He and Barbara decided to give the movie business a shot and produced five feature-length motion pictures for worldwide distribution.

In the next scene of their lives John joined the faculty at Gardner-Webb University as visiting professor and director of theatre. Barbara taught acting classes. Together they recruited friends and recognizable actors, building what John describes as one of the best models of College Theatre in the South.

Barbara became active in Theatre Charlotte and they appeared on stage together for the first time, playing older citizens celebrating their wedding anniversary. Notes John, the closing performance at a Sunday afternoon matinee coincided with their actual 33rd anniversary.

Her reputation as a visual artist was on the rise, and Barbara became founding executive director of the Cleveland County (NC) Arts Council. She stayed for seven years while John produced recruitment and fundraising videos for several North Carolina colleges. He spent the last several years at Gardner-Webb as vice president, followed by a one-year term as vice president of Mars Hill College. 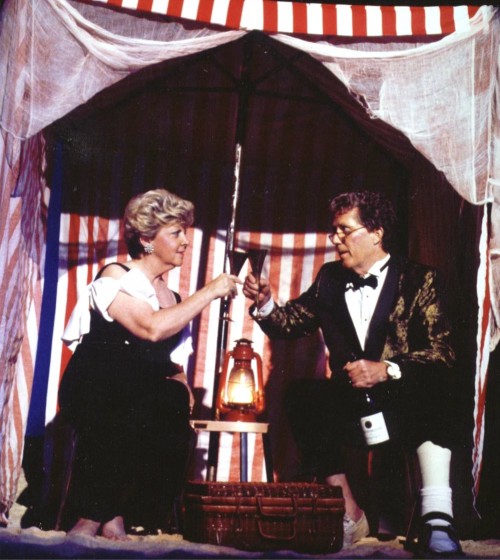 When they finally “retired” in South Carolina the curtain didn’t exactly come down on their involvement with the arts. Barbara is founding executive director of the Cultural Council of Georgetown County, and John writes a weekly column for several area newspapers. Several of them are in his book, “Southern Breezes Whistle Dixie.”

“Life goes on for these aging Wake Forest lovers and the arts remain a fundamental part,” says John. “We will be forever grateful to the arts at Wake Forest for introducing us to the creative world, and to each other!”

Where are you now? Help classmates catch up with you by submitting a short item to magazine@nullwfu.edu.