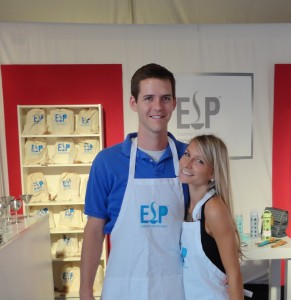 Hannah Masimore (’09) and her fiancé, Ben Helsabeck (’09) pass out gift bags at the Grammys.

“The Artist” may have been the big winner at the Oscars ceremony Sunday night, but Hannah Masimore (’09) had a big night, too.

Masimore supplied eco-friendly products from her new company, Essential Safe Products (ESP), for the $62,000 gift bags given to each Academy Award nominee, just weeks after giving out gift bags to celebrities at the Grammys.

George Clooney didn’t win an Oscar for “The Descendants,” but he did get to take home a selection of ESP products including a reusable produce bag, glass water bottle, stainless steel snack container, Bamboo utensil set and $200 gift certificate for other products from ESP’s website.

To make the list of companies invited to place items in the Oscar swag bag is an impressive achievement for any company, especially one started just six months ago by a recent college graduate, Masimore, and her mother. Masimore, who is president of ESP, based in her hometown of Plantation, Fla., said she was ecstatic when she learned their products would be included.

“It made me feel like what I was doing with our company was really making a difference. If someone saw what we were doing and believed in it so much to ask us to be a part of the (gift bags), I knew there must be others out there just as supportive. This was a once-in-a-lifetime opportunity I couldn’t pass up.”

The goodie bags contained everything from food to cosmetics to vacations that every celebrity needs to bounce back from the pain of not winning an Oscar. Losers could leave the country on a $15,000 elephant safari in Botswana, or drown their sorrows (with 100 friends) at a $15,000 “soiree fit for Hollywood royalty” sponsored by Disaronno Italian liqueur. Or they could stay home and binge on a seven-layer caramel cake and naughty bits brownies while sitting around in their Dearfoam slippers and applying anti-aging skin cream.

Masimore had approached Distinctive Assets, the company that puts together the Oscar gift bags, about including ESP’s products. ESP was accepted and did have to pay a fee, but Masimore said it was well worth the cost. Besides the cachet of having your products associated with celebrities, ESP has also been prominently mentioned on news and entertainment websites listing the products in the gift bags; ESP is listed third on Time magazine’s list, right behind Purell’s crystal-covered bottle of hand sanitizer and Disaronno. A Florida television station broadcast a news story on her immediately following the Oscars.

Masimore says she thinks ESP’s products were chosen because they’re “new, different and eco-friendly. Never in the past had they had a company with more of a ‘mission’ and familial focus that wanted to not only do good for the environment but also help make family lives healthier.”

Masimore and her mother, Susan, started ESP last September to offer a one-stop website for non-toxic, eco-friendly, reusable products for food preparation, storage and serving. All the products are free of BPA, Phthalates, PTFE, lead and other chemicals that can be harmful to humans. The company offers about 300 products made of bamboo, glass and stainless steel, including bakeware and cookware, water bottles and baby bottles, and kitchen accessories and food storage products.

Masimore says she’s become passionate about promoting healthy lifestyle choices. “I’m only 25-years-old and I’ve already found something that I’m passionate about. The more I learned (what was in conventional products), the more I wanted to change what I was doing. Hopefully this will help spread the word about chemicals and help people avoid chemicals in their food and in what they drink.” 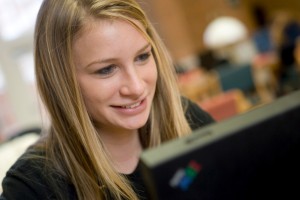 Hannah Masimore studying in the Z. Smith Reynolds Library in 2006.

Masimore majored in business at Wake Forest with a minor in entrepreneurship and social enterprise. She singles out professors Sheri Bridges and Bob Fly for being especially influential. “I loved all four years at Wake, and I never miss an opportunity to brag about how amazing an education I got. Everything I learned in the business school has been incredibly relevant to my jobs and current entrepreneurial venture.”

Two weeks ago at the Grammys, ESP was among the companies invited to set up a “gift lounge” at the Staples Center. Masimore, and her fiancé, Ben Helsabeck (’09), handed out gift bags to LL Cool J, Mike Love of the Beach Boys, Jason Aldean, members of the Band Perry and actors Neal Patrick Harris and Pauley Perrette.

She’s hoping to parlay her Oscar and Grammy “experience” into even more business opportunities for ESP. “I hope to take those two experiences and make something out of them. You can’t expect things to come to you, you have to go out and work for it.”