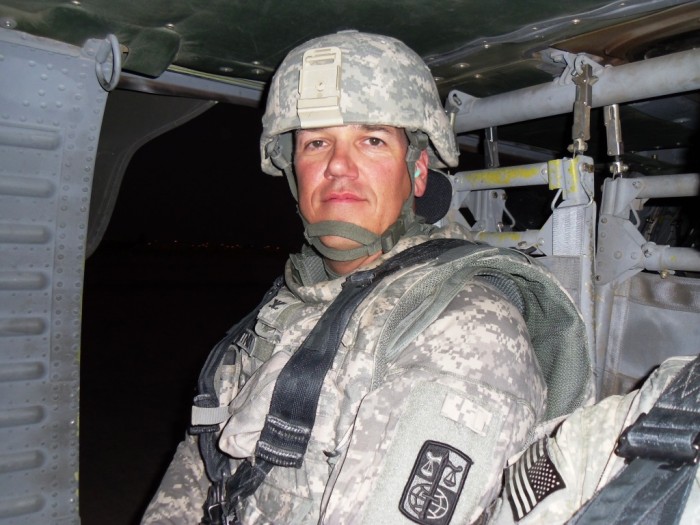 The sounds of war – incoming mortar rounds and rockets – were never far away from the makeshift courtrooms of Federal Judge Frank Whitney (’82).

For seven months last year, he served as a military judge in some of the most dangerous parts of the Middle East. Under his traditional black judicial robe, he carried a 9 mm pistol in a hip holster. Venturing outside the relative safety of U.S. bases meant “gearing up” in body armor and travelling by armored vehicle.

A reservist in the U.S. Army, Whitney, 52, was deployed last June to preside over courts-martial of U.S. soldiers in Iraq, Afghanistan and Kuwait. Safely back home now in Charlotte, N.C., he remains grateful to the young soldiers he saw risking their lives.

“The credit should go to the 18-, 19- and 20-year-olds who are over there in harm’s way,” says Whitney, who has served as a U.S. District Court judge for the Western District of North Carolina in Charlotte since 2006. “I saw another side of that age bracket, and they inspired me. Our country has a great future with those men and women.”

His service in Iraq and Afghanistan was unprecedented. Fred Borch, the historian for the U.S. Army JAG Corps, told The Charlotte Observer that Whitney was the first federal judge to become a military judge and preside over courts-martial in a combat theater. He also made history by presiding over the last court-martial in Iraq before the U.S. troop withdrawal last December.

Whitney’s journey to the Middle East began at Wake Forest more than 30 years ago. His father and grandfather served in the Army, and he continued the family tradition when he signed up for Army ROTC. He was commissioned in the Army Reserves on May 17, 1982, the day he graduated from Wake Forest.

Courses taught by professors such as David Broyles in politics, David Smiley in history, Robert Helm (’39) in philosophy and William Angell (’41) in religion paid off in the desert. Studying Mesopotamia, ancient Babylon and even Hammurabi’s Code — a Babylonian law code on everything from contracts to family disputes — prepared him for “this incredible region of the world,” says Whitney, who was a history major. His brother, Grant, graduated from Wake Forest in 1976 and from the School of Law in 1979.

As a reservist, he’s served in more than 25 countries including Bahrain, Georgia, Germany, Italy, Indonesia, Japan and South Africa. But his tour in Iraq was his most challenging. He was based in Kuwait, but spent most of his time in Iraq and Afghanistan. He typically worked 14-hour days, seven days a week. There’s no time off in a combat zone, he notes.

He presided over 25 courts-martial for soldiers facing charges ranging from alcohol and drug possession to rape and robbery, as well as crimes unique to the military, such as disrespect to a senior officer or absent without leave. He held court in hardened buildings on U.S. bases, including Baghdad’s Green Zone. When mortar rounds and rockets interrupted court proceedings, he would hit the ground and then run to the nearest bunker.

“I never had a real deep fear for my life or serious injury,” he says. “But it was real. Many times I had to recess court because we heard incoming rounds. It was random and unpredictable. I didn’t have the same fear for my life that the real heroes did, the young men and women going outside the wire every day.”

The most difficult part of the experience was not seeing his family — wife, Catherine, and daughters Annie, 15, and Hunter, 14 — for seven months, other than a one-week vacation in Paris.

In late November, he conducted the last military trial in Iraq before the U.S. troop withdrawal was completed in mid-December. As troops were shutting down the base around him, he presided over a 16-hour trial in a temporary courtroom in southern Iraq for a soldier charged with disrespect to senior officers. After concluding the trial a few minutes before midnight the day before Thanksgiving, he boarded a C130 at 4 a.m. Thanksgiving Day for a flight to Kuwait, his first stop on the long journey back home.

The deployment to the Middle East was his last; he’s retiring this summer as a colonel after serving the maximum 30 years in the Reserves. He has a new appreciation for life in the United States and the judicial system after his experience in the Middle East. “I think I’m a much better judge for having that experience.”