Four decades after he first bid farewell to his alma mater, William C. “Bill” Gordon is saying goodbye for a second time.

After earning his undergraduate and graduate degrees in psychology from Wake Forest, Gordon (’68, MA ’70) moved west to find his fame, if not his fortune, at the University of New Mexico. Following a distinguished career there – including four years as president – he returned to Wake Forest as provost in 2002.

He stepped down from that position in 2007 and began teaching in the psychology department. He is retiring this summer as professor of psychology, but he plans to remain active in higher education.

“Having an opportunity to return to my alma mater, which had such an influence on my formation as a person and on my career, has been very satisfying to me personally,” Gordon said recently. “It gave me a chance to give something back to a place that has given so much to me.” 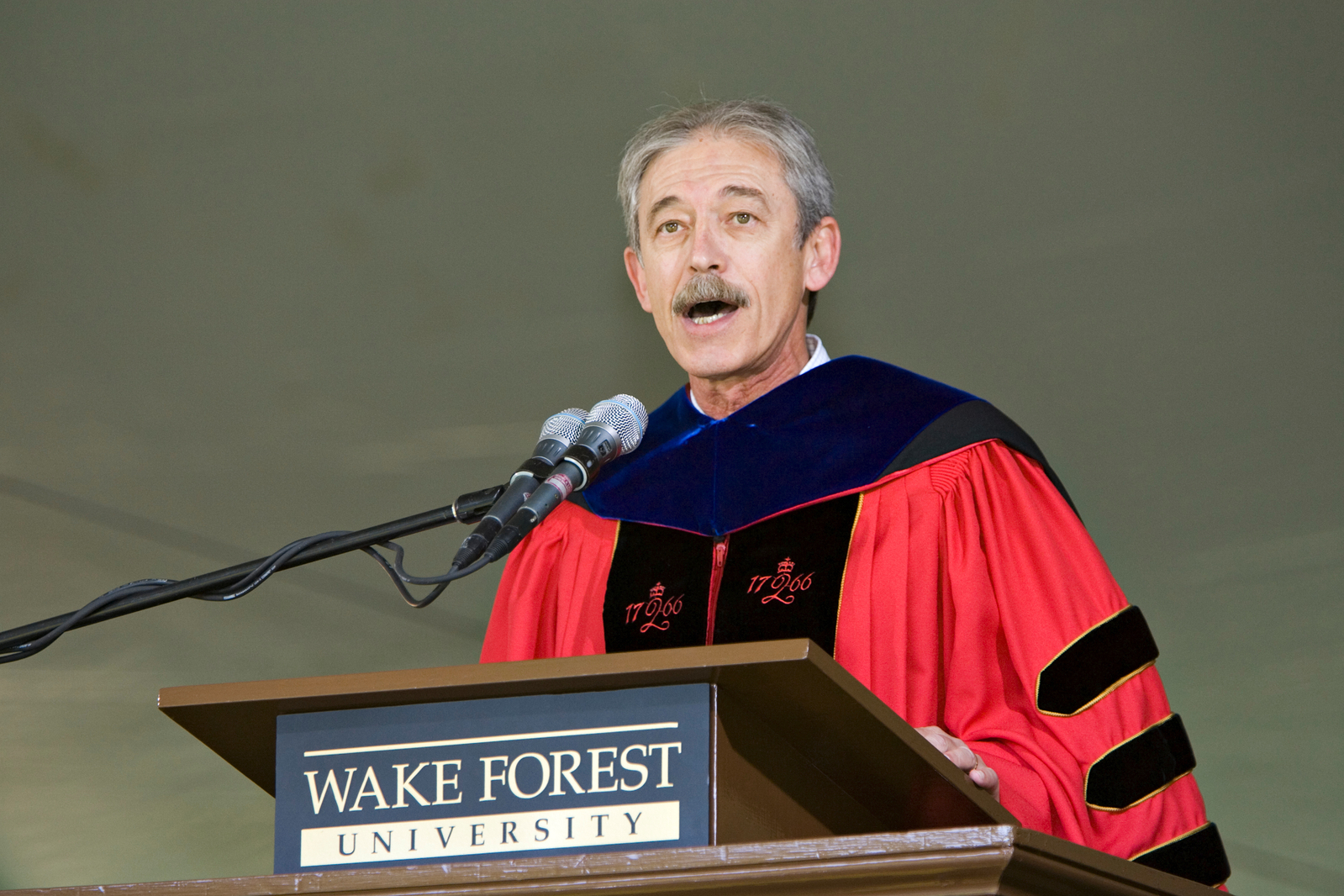 Gordon says he’s grateful to have worked alongside “truly exceptional and supportive colleagues” in the psychology department and with outstanding students. “Without any doubt, what I will miss the most is being able to teach and mentor my students,” he says. “It is easy to begin to take for granted just how bright, dedicated and engaged our students are, and what a joy it is to work with them and to see them grow.”

Students said they will remember Gordon’s commitment and dedication to helping them become stronger researchers and prepare for graduate school and careers in psychology. Rising senior Thomas Hopkins had Gordon for only one class, but said he’s been as influential as any teacher he’s ever had. “He made me better as a student and as an individual,” he said.

A native of Rome, Ga., Gordon was business manager of the Old Gold and Black and Student Government treasurer when he was an undergraduate. He earned his Ph.D. in experimental psychology at Rutgers University and taught for five years at the State University of New York at Binghamton. He joined the University of New Mexico faculty in 1978 and served as psychology department chair, dean and provost before being named president in 1999. He and his wife, Kathy, have four children. 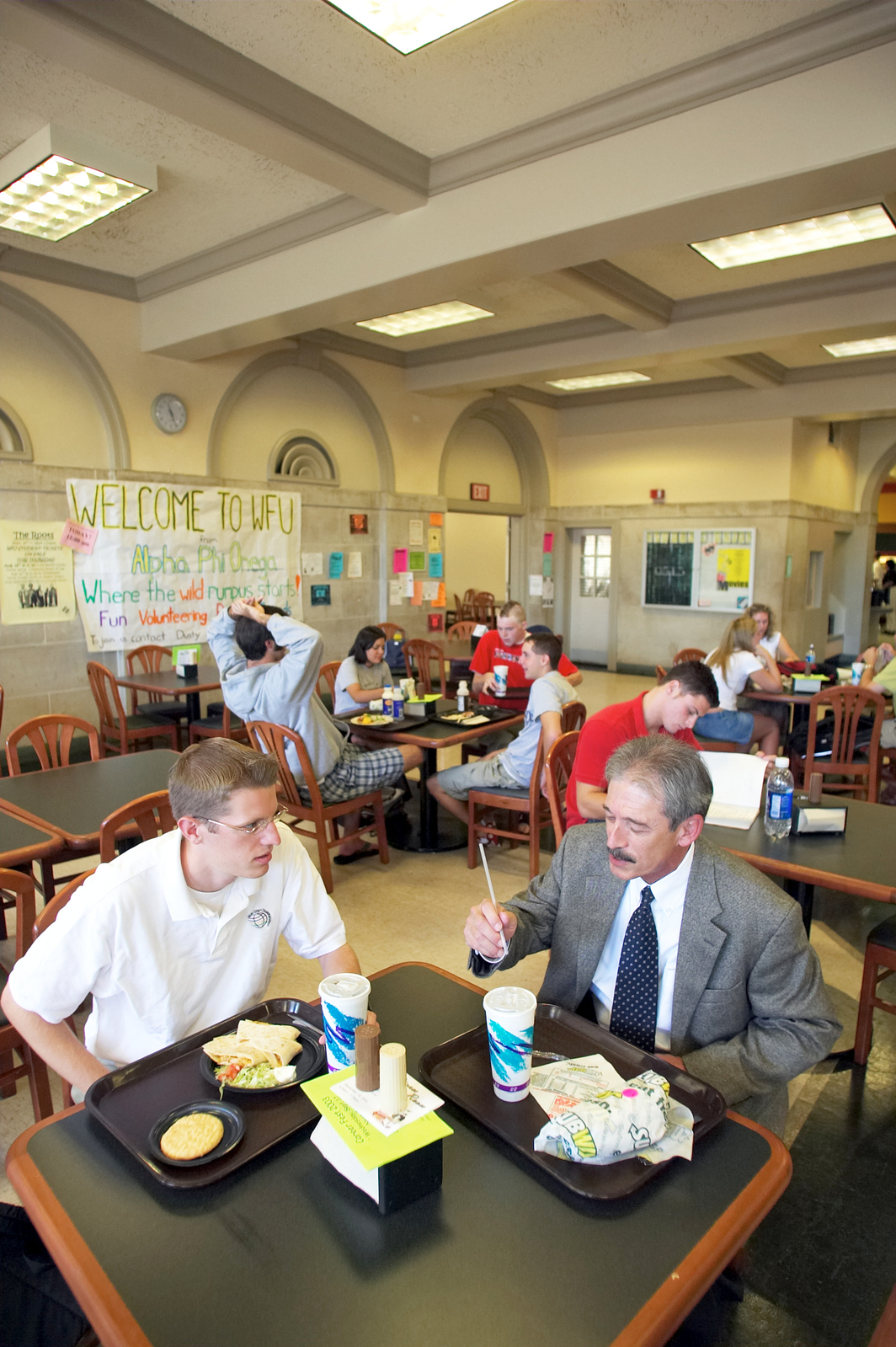 Gordon has lunch with student Douglas Hutton in the Pit in 2003.

He arrived at Wake Forest highly regarded for his commitment to the teacher-scholar ideal and Wake Forest’s liberal arts tradition. He served as acting president for five months in late 2003 and early 2004 while President Thomas K. Hearn Jr. was being treated for a brain tumor.

As a teacher, Gordon took a personal interest in his students and was always eager to share advice; his “commitment and caring for his students was plainly evident, said rising senior Catherine Mewborn. “I thought that I knew so much about research and writing, but I learned and improved so much more than I could have imagined. The time and effort he put into helping us develop are the markings of a great teacher.”

Carrie Jacquett, also a rising senior, described Gordon as “probably the wisest man I’ve ever met.” Among other things, Jacquett said Gordon worked with students individually to help them improve their presentation skills to share their research. “I learned that there is an art to presenting, and that it isn’t just saying words. I know that the skills of writing and presenting that I learned in his class will take me far,” she said.