How should I describe Jim Barefield, who has shaped so many of his students into the writers we have become? One has to begin with the voice, I think: his distinctive low warble, with its long, drawn-out vowels. He sounds surprisingly like Winnie the Pooh, if Winnie the Pooh were from Birmingham, Ala.

It is not the voice alone, however, that has tempted two generations of students to impersonate Jim. It’s the fact that his sentences have the rhythm of stunt cars being driven off a cliff. He steers right up to the brink of something big. Then we wait … and wait … for the impact.

During these epic pauses, Jim will hem and haw, his voice filling the silence like an idling motor. One arm may flap in the air, endeavoring to locate his precise point. Then, just when you think all hope is lost, he finishes the sentence. He makes his point. And suddenly you see the thing you were on the cusp of seeing, but never could have seen without him. 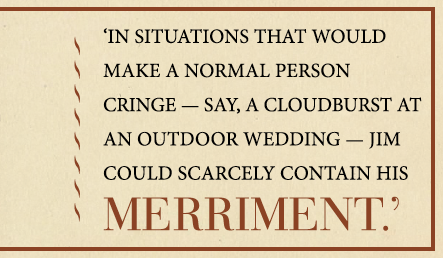 Jim’s voice is but one of his idiosyncracies. When I arrived at Wake Forest in the early ’90s, direct from a small Midwestern town, he struck me as vaguely Continental. He ate only lunch or dinner, not both, preferably at the sort of restaurant that did not serve sweet tea. He took a daily walk to the Reynolda Gardens gate, rain or shine, at such a brisk clip that one wondered if he owed money at the soda shop. His wardrobe was comprised largely of shades of brown, as was his Toyota. He rarely taught in classrooms, preferring the don-like environs of the honors room or his own faculty apartment, where books rose to the rafters and Pepperidge Farm cookies were in abundance. 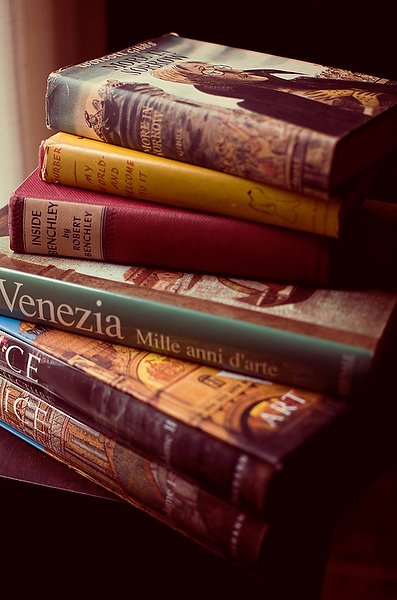 He was also ubiquitous. Officially, he was a professor of history, but he was forever popping up in different guises — head of the honors program, scholarship adviser. Wait — he’s head of the Venice program, too? It was like one of those Monty Python episodes where the guy who was playing the vicar a moment ago suddenly turns up in a pilot’s uniform. I began to think the University was seriously understaffed.

But the most disconcerting thing about Jim was his attitude. Before Jim, I had never known anyone who actually got happier when things went awry. In situations that would make a normal person cringe — say, a cloudburst at an outdoor wedding — Jim could scarcely contain his merriment. (If a wet dog got loose and ran through the ceremony, so much the better.)

This wasn’t schadenfreude (Jim was too kind, too generous for that), but rather something he called “the comic view,” as I learned in his honors seminar. Depending on the lens through which one viewed them, Jim argued, the selfsame events could be comic, tragic or romantic. At our age, he noted, the normal thing was to see ourselves as romantic figures on heroic quests. Jim, however, chose the comic view, which he defined variously that semester as “a way of saying yes to life,” a conviction that “whatever the center of the universe is, it’s probably not you,” and an acceptance of the idea that “life is a circle, not a straight line.”

At the time, that idea — that I could choose the lens through which I viewed life — was so radical it took my breath away. I was not alone. A loose confederation of young ironists was forming, as it did every few years in those days. We were modeling ourselves on Jim, though we never would have admitted it (it was too un-ironic, and besides, Jim would have found the idea repellent). We traded ironic jabs, tacitly competing for the title of dorm wag. In the wee hours at Krispy Kreme, we did Barefield impressions and debated whether objective historical facts could exist.

By day we dived into comedy, with Jim as our guide. Alongside Shakespeare and Molière, Jim introduced us to Don Marquis’ Archy, a cockroach who types poems in an empty office at night, leaving behind pearls like:

Jim brought in dark comedy, too — “Sweeney Todd,” “As I Lay Dying” — watching our faces to see if we would laugh or recoil. I remember that he got a real bang out of playing his old record of Tom Lehrer’s nuclear-holocaust ditty, “We’ll All Go Together When We Go:”

We learned to recognize certain patterns of comedy — a) introduce puffed-up character, b) inflate still more, c) puncture. Jim liked any writer who could pop a balloon — Twain, Welty, Stoppard. But he was not content merely to point out the pattern. He wanted us to see how the great ones did it. “How does it work?” Jim would ask, and spend the next 10 minutes pointing out the set-up, the reversal, the timing, even the crucial comma.

Though I was trying out the comic view, Painfully Earnest was still my chief mode of expression. In my essays for the class, I repeatedly floated balloons for Jim to pop. He obliged. “ ‘A way not to surrender’ seems closer to it than the hope/despair dichotomy,” he scribbled in one margin. “Angst was never all it was cracked up to be.”

He was immune not only to Angst, but also to Solemnity. My beloved Yeats, for instance, was a favorite foil of Jim’s. To the Yeats lament, “Things fall apart/The centre cannot hold,” Jim’s riposte was, “The center cannot hold — Whoopee!” 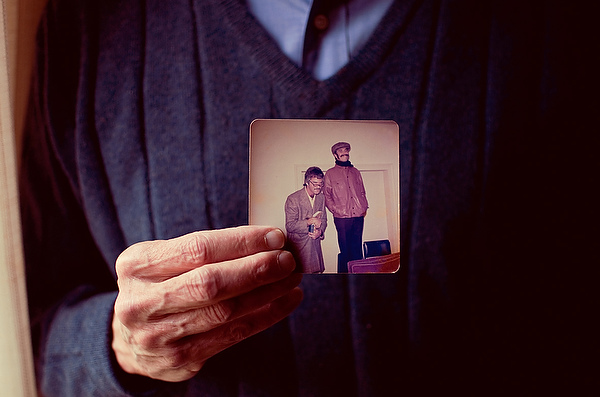 Barefield’s stack of Wake Forest snapshots includes this one of hijinks and impersonations at Casa Artom on Halloween night. 1975.

Even Venice was not exempt from Jim’s comic view. To me, it was a glorious city on the water, an atmospheric backdrop to the riveting events of my youth. To Jim, it was a dank small town where the workmen arrived at noon and left by one for lunch. True, he enjoyed the floods and the transit strikes. But though he made dear friends there, he didn’t swoon over the place. His interest lay in its history. Jim’s self-guided course of study in Venice, a dense stack of mimeographed pages, takes you from Torcello to Casanova to Ruskin and is dotted with instructions to note the inappropriate statue in the transept.

In short, Jim loves a reversal, and nowhere more than in a work of history. When our European Historical Novels class began “War and Peace,” I leaned forward in my chair, eager for trumpets to sound. Cue Jim, who announced, “The subtitle of this book is, ‘To Hell with Heroes.’” Flash forward to another day, another text. “This book is the history of a failure,” Jim said, adding, “There’s nothing like the history of a success to put you to sleep.”

In history, as in life, he watched for the moment that things went wrong — then waited to see how the narrator would spin it. He was hoping, each time, for a writer who could hew to a clear pattern, leading a reader through a series of recognitions. If the writer had imagination, and could play within the pattern, Jim got excited. Besides all that, he looked for strong images, good writing and a pulse: “If it isn’t written with passion,” he memorably said, “then the hell with it.”

In class, Jim pressed us hard to unearth the writer’s agenda. “What are we to make of this character?” a typical study question read. “How does the author feel about X?” He would not tolerate passive reading. “Figure out where the author’s coming from. Then you’re equipped to read the book,” he insisted. “You should read it actively and not just be a repository for the author’s ideas.” 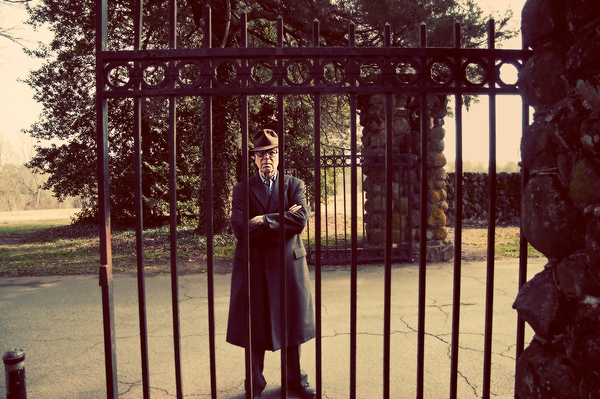 Of course, he was also teaching us to write, though I didn’t know it at the time. First he showed us the patterns of thought; then he showed us how the words worked. Jim himself was an expert practitioner of the forms of comedy, from the terse one-liner (“Nikolai has just learned that bullets do something when they hit you”) to the apt metaphor (“Henry Fonda played Pierre, which was sort of like a string bean playing a watermelon.”)

He also knew how to undercut genuine emotion with humor. “Time gives an edge to things,” he said one afternoon as we were finishing up Tolstoy. “The fact that it’s not going to continue increases its value while it’s going on.” He paused. “You know, ‘going for the gusto.’ There are so many poetic ways of saying things.”

You will not be surprised to learn that Jim’s own writing is a model of economy, if not of productivity. He has been happily at work on a book about the uses of irony in history for about three decades. When we speak by phone now, 20 years on, he will sometimes say, “I wrote three whole sentences. It was a very good day.” Though the book is not yet ready for readers (and so we wait … and wait … for those sentences), it would be cruel to deprive you of a sample of Jim’s writing. So I close with a set of program notes he wrote for a 1974 Wake Forest theatre production of Oscar Wilde’s “The Importance of Being Earnest,” which are, to my mind, as fine an example of the genre as any in existence:

The importance of “The Importance of Being Earnest” in the history of western literature is of course widely recognized …. Wilde’s play has had importance not only for literature but for life. It cannot be doubted that its performance propelled the name, Earnest, to the top of the 1895 London Times’ list of important names, displacing Albert for the first time in the Victorian period. The general consensus, however, is that it is as a catalyst for social reform that the play has had its most lasting importance. Without it the Fabian Movement to replace railway cloak rooms with luggage lockers would have been doomed to failure. Still, there are some carping critics who would deny the play the ultimate accolade on the grounds that it does not answer existential questions. To these one can confidently reply, “Neither does it raise them.”

Joy Goodwin’s (’95) nonfiction and criticism have appeared in The New Yorker, The New York Times and The Village Voice. She is the author of “The Second Mark” (Simon & Schuster, 2004) and a forthcoming screen adaptation of William Faulkner’s “Intruder in the Dust.”