Words Awake! served as a homecoming for more than 50 writers with ties to Wake Forest and scores of North Carolina lovers of the word on March 23-25. 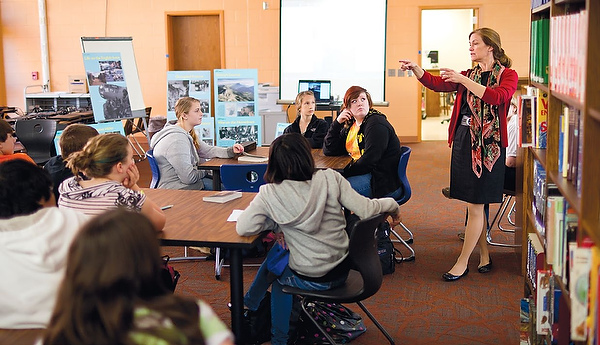 Laura Elliott (’79), one of 17 alumni writers who visited nine public schools to share their enthusiasm for the written word.

The event began with 17 alumni writers fanning out to local public schools to discuss writing. Friday evening, Tom Hayes (’79) premiered his documentary in progress, “Editor Uncut,” about his father, Harold T.P. Hayes (’48, L.H.D. ’89, P ’79, ’91), who as editor-in-chief of Esquire from 1963-73 ushered in new journalism and made Esquire a must-read among the literary set. The conference included panels on myriad topics such as poetry, screenwriting, biography/memoir, writing for children and journalism as well as a dinner to honor 15 men and women named as the first members of the Wake Forest Writers Hall of Fame.

Words Awake! maintains its own website where you can read more and view more photos.