Getting lost is probably not the best way to begin a 1,000-mile hike across North Carolina. Five minutes into a marathon trek from the mountains to the ocean, Chuck Millsaps (’83, P ’13, ’16) found himself lost atop Clingman’s Dome in the Great Smoky Mountains.

Had it not been 4:30 a.m., dark and foggy, the view would have been spectacular. But when you’re guiding elite long-distance runner Diane Van Deren in her attempt to hike North Carolina’s Mountains-to-Sea Trail in record time, there’s no time to enjoy the view – or get lost.

Millsaps soon found the way, and they were off again on a grueling expedition, the Mountains-to-Sea Trail Endurance Run, which had a decidedly Demon Deacon flavor. Millsaps and Van Deren conceived the run to raise funds and awareness for North Carolina’s official, although still unfinished, state trail, which snakes through 37 counties on its way from the Great Smoky Mountains to the Atlantic Ocean.

“It was far more than we bargained for,” he admits. But in the next breath he adds, “It was apparent we were in for a treat.” 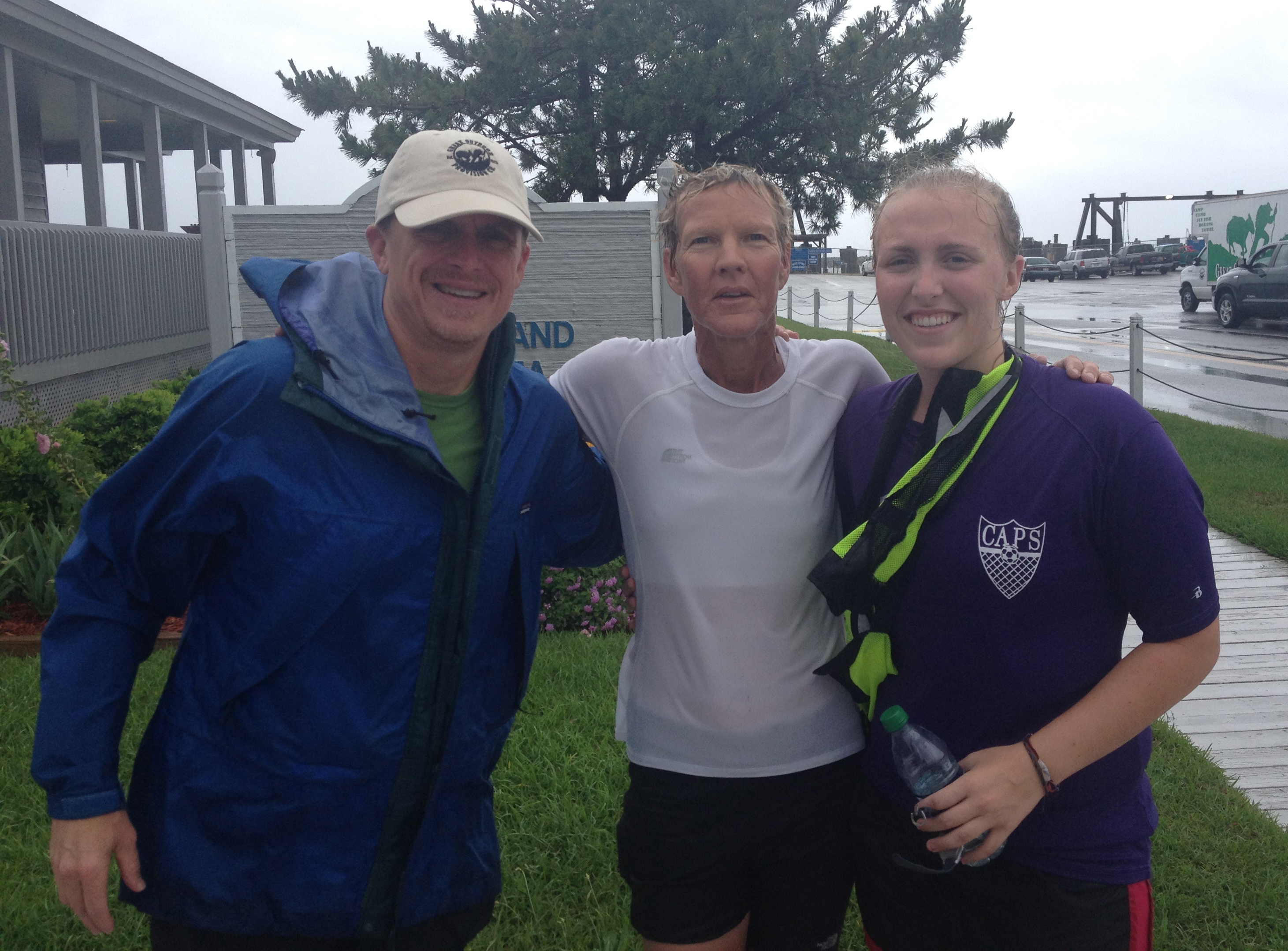 Millsaps, the expedition’s leader, was by Van Deren’s side for about a third of the nearly 1,000-mile trail from one end of the state to the other. He likened it to a horizontal Mount Everest expedition, without the dangers of falling off the side of a mountain or dying from lack of oxygen, to be sure, but an emotional and physical challenge and a test of endurance nonetheless: mile after mile, day after day, of hiking or speed-walking; climbing mountains; fording creeks (15 in one day); and fighting through a tropical storm to the finish line on the Outer Banks.

They spent 20 hours or more a day on the trail, averaging about 50 miles a day, before catching a couple of hours of sleep wherever they happened to stop. When he wasn’t on the trail, Millsaps fought “survivor’s guilt” as he followed along in a support truck, coordinating logistics and ferrying in supplies to Van Deren and her guides.

Just over three weeks after beginning the run on May 10, Van Deren climbed to the top of a sand dune at Jockey’s Ridge State Park on the Outer Banks on June 1 at 9:29 a.m., completing the trail in 22 days, five hours and three minutes, breaking the previous record by nearly two days. 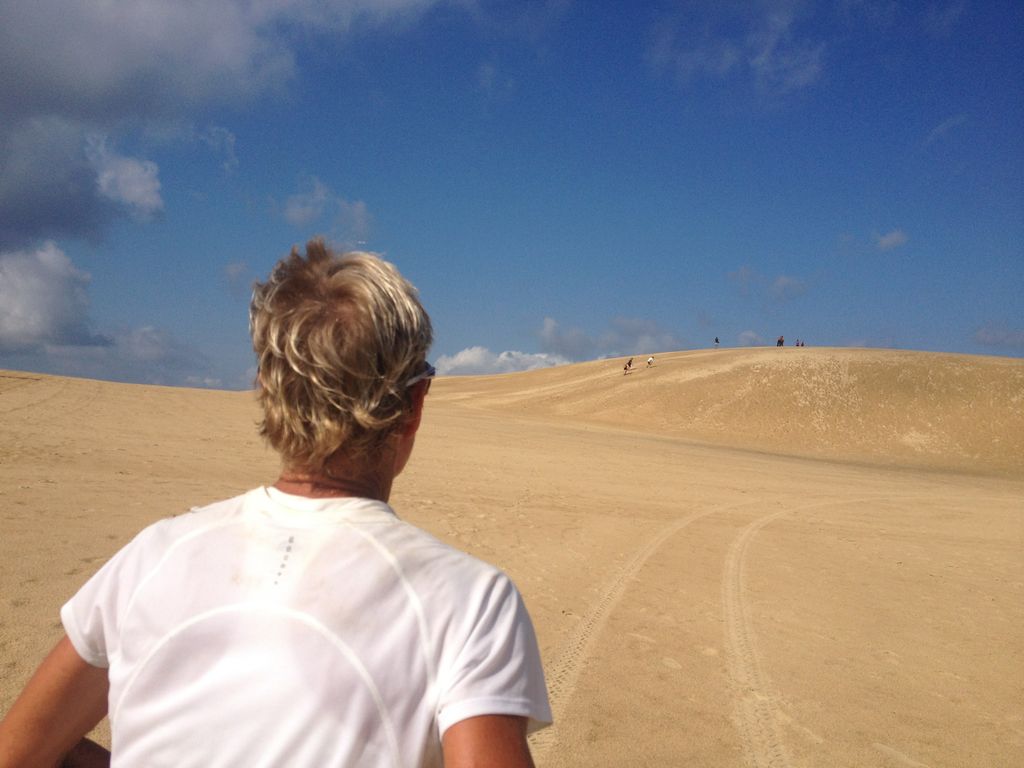 Van Deren approaches the finish line on Jockey’s Ridge, 22 days and 2 million footsteps after beginning her journey from the mountains to the sea.

To put her accomplishment in perspective, the Friends of the Mountains-to-Sea Trail (FMST) – a non-profit organization that promotes the trail – estimates that it takes two to three months to hike the entire trail; only 28 others have ever completed the entire trail.

It was not only an impressive physical feat, Millsaps says, but also the embodiment of Pro Humanitate. Van Deren, 52, lives in Colorado. She was diagnosed with epilepsy years ago and suffered seizures until undergoing brain surgery. Despite side effects from the brain surgery that would have sidelined most runners – she can’t read a map or navigate on her own, hence the need for Millsaps and other runners to guide her – she’s persevered.

“She does this out of a spirit of gratitude and out of service to others,” Millsaps says. “Her mission (now) is to serve others through her passion for running.” 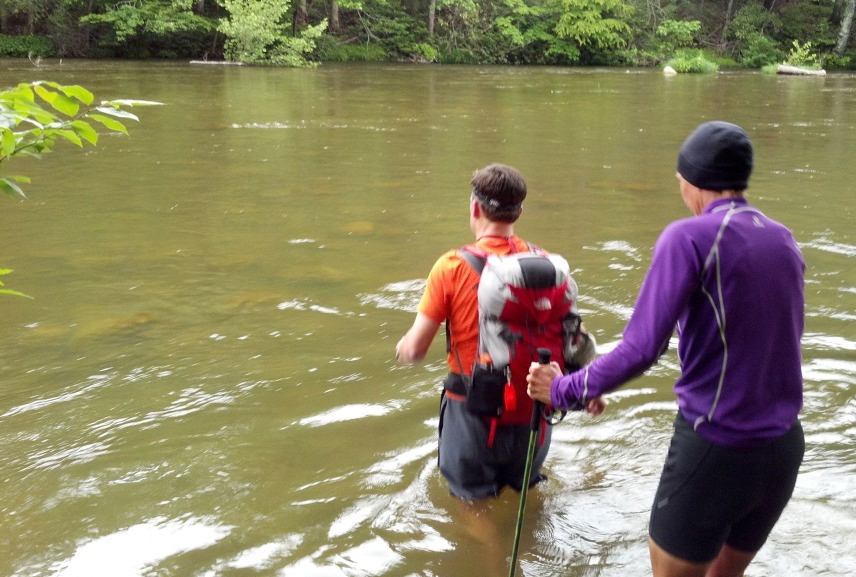 Van Deren credits Millsaps and “Team Diane” for being with her every step of her journey across the state – some 2 million footsteps, give or take a few hundred. She said afterward that it was the most challenging run she’s ever undertaken, even more grueling than a winter race in Canada’s Yukon or a high-altitude endurance race in Colorado’s Rockies.

Millsaps, 51, was well suited to plan Van Deren’s record-breaking attempt and then keep things running as smoothly as could be expected on the trail. Besides being an avid runner and occasional marathoner, he had previously run several sections of the Mountains-to-Sea Trail in the mountains.

Millsaps has worked at the Great Outdoor Provision Co., an outdoor retailer based in Raleigh, N.C., since 1985. (He’s currently “Minister of Culture,” a creative title for his job ensuring that the company is meeting its commitment to its customers.) Great Outdoor Provision Co. and The North Face sponsored Van Deren’s run, which raised about $30,000 for improvements to the trail. 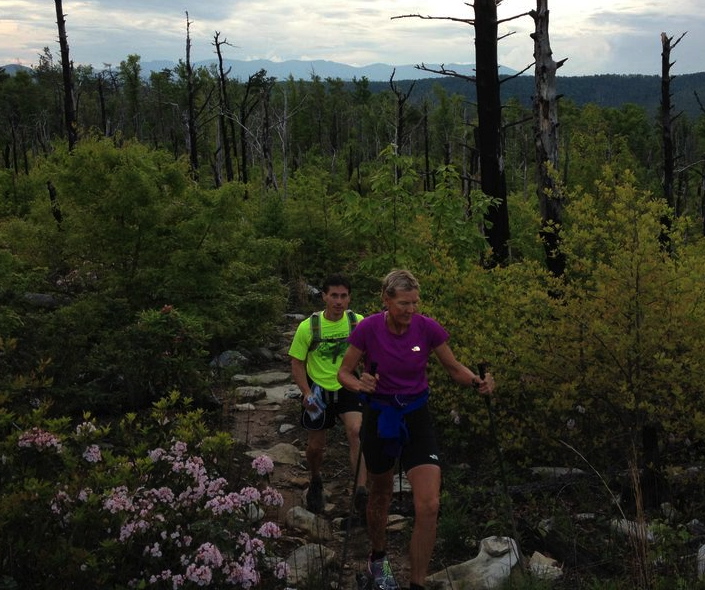 Only about half of the trail is finished; the rest of the route runs along roads. FMST, the state of North Carolina, local governments and volunteers continue to secure land and build new sections of the trail. Long-range plans call for an uninterrupted trail from the mountains to the coast.

Through forests and swamps, through little towns and across farms, through state and national parks, along mountain trails and country roads, Millsaps, Van Deren and their local guides kept pushing forward. As they approached New Bern, a state trooper – not the first to ask what they were doing – stopped them. “He just shook his head and told me that we should have better sense than this,” Millsaps recalled. “I agreed.” But they kept running, 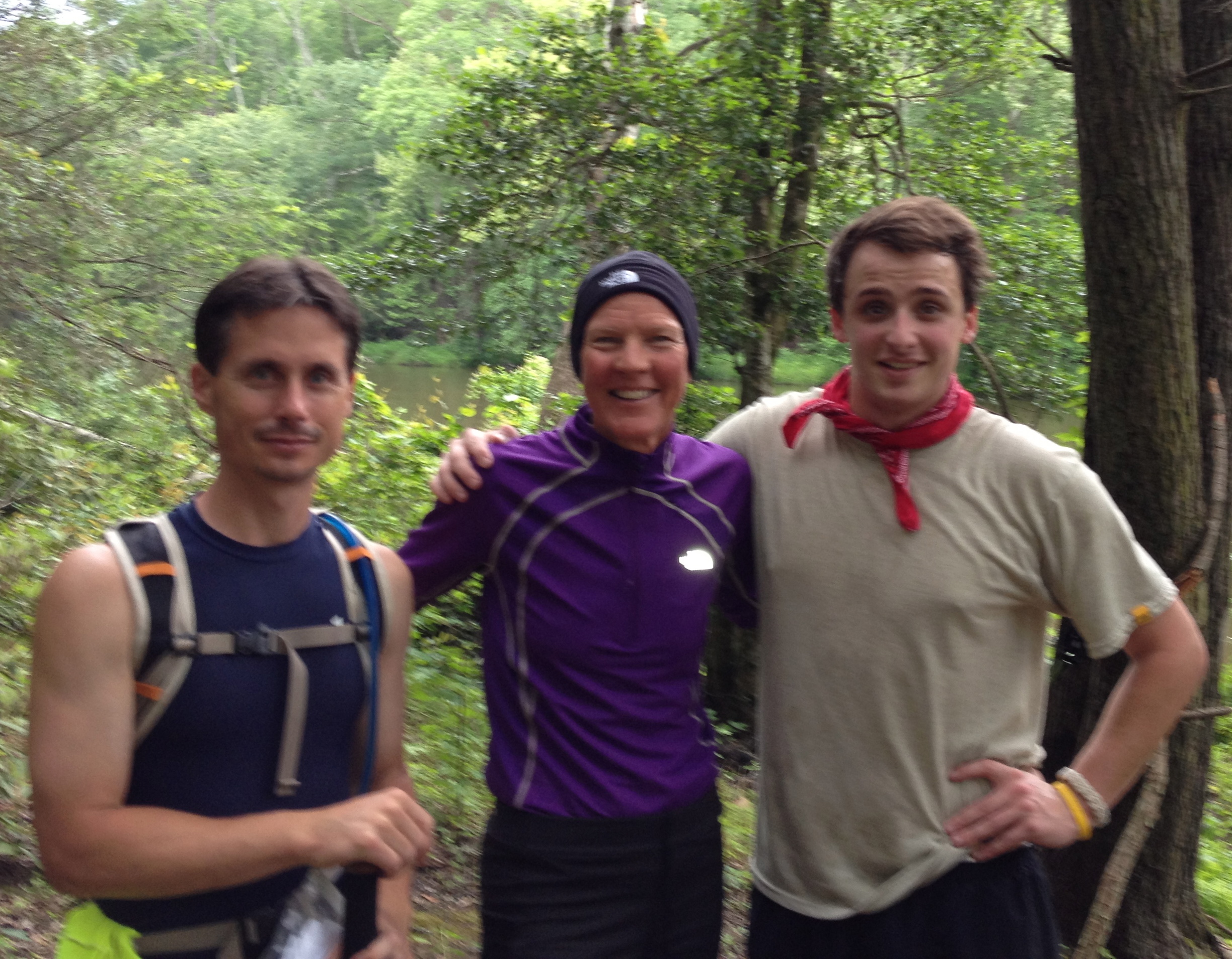 Several others with Wake Forest connections joined in as well. Millsaps met Mark Rostan (’94) of Valdese, N.C., when he was recruiting guide runners for Van Deren. They were 15 miles into their hike through Linville Gorge and Wilson Creek Wilderness Area before they realized their common Wake Forest ties. Jill Miller, wife of Health and Exercise Science Associate Professor Gary Miller, also guided Van Deren along several segments.

As the runners neared the coast, Doug McMillian (’73), CEO of the Capital Area YMCA in Raleigh and a friend of Millsaps who have been following their journey, offered the Y’s Camp Seafare on Minnesott Beach for a quick rest stop.

As they begin their trek north up the Outer Banks to Nags Head, Tropical Storm Beryl lashed the coast. Fighting through howling wind and relentless rain, they still made 50 miles that day. 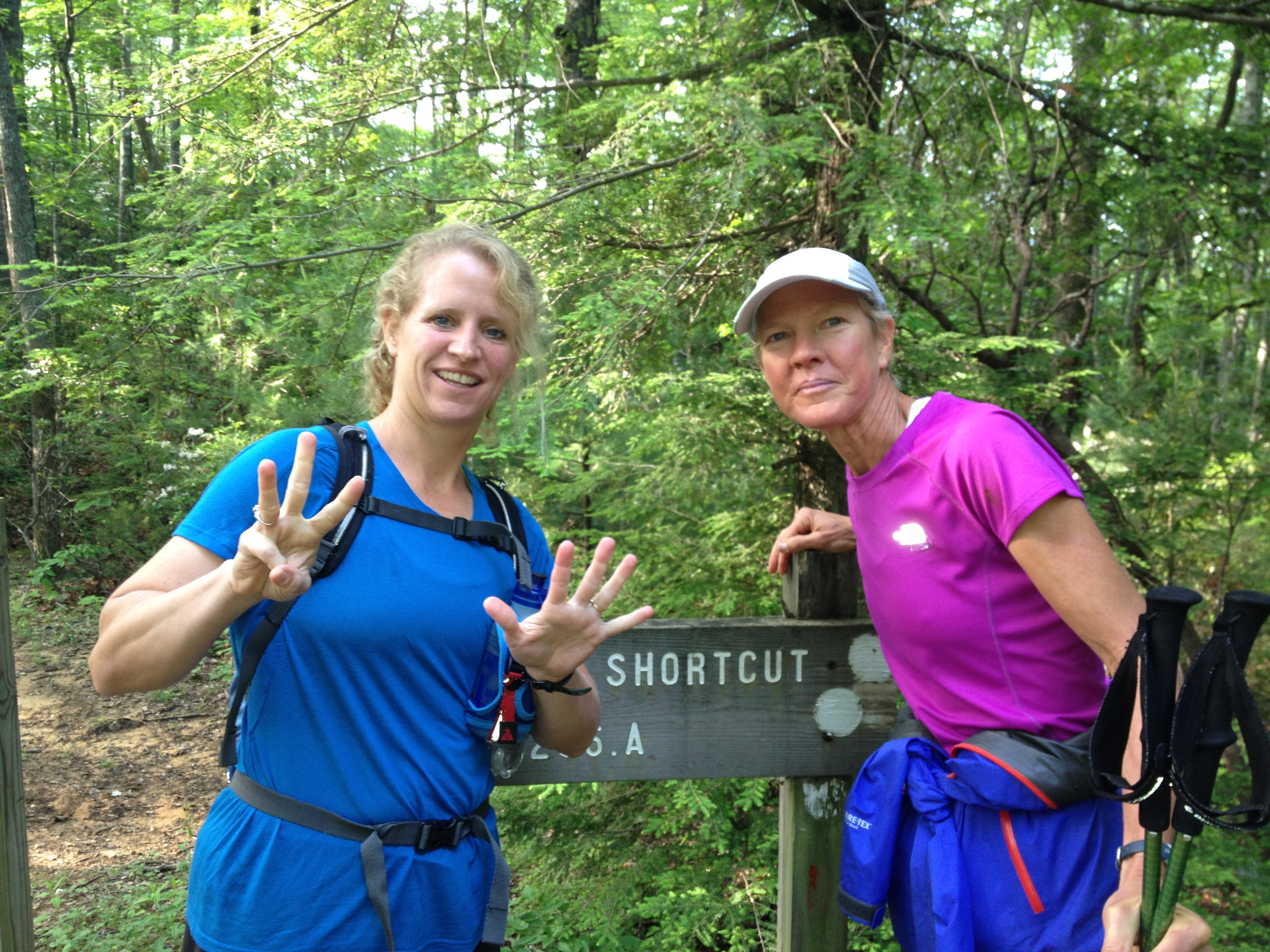 Despite what the sign may say, Jill Miller and Van Deren weren’t taking any shortcuts on day 8 of the Mountains-to-Sea expedition.

“Storms cells were hammering us relentlessly,” Millsaps wrote on the team’s blog. “The heavy winds (felt) like sandblasting.” As they crossed one bridge, Millsaps strapped himself to Van Deren: harder to blow two people over the side than one, he reasoned. They heard tornados in the distance. “The five-mile section from the end of Monroe Gaskill Memorial Bridge was the most difficult stretch of running I have ever endured,” Millsaps says.

Two days later, they were atop an 85-foot sand dune at Jockey’s Ridge in Nags Head, with nowhere else to run. Millsaps’ name won’t go in the record books with Van Deren’s, but he left Jockey’s Ridge with a sense of accomplishment and gratitude for the journey.

He’d do it again with one caveat – it would have to be with the same team. The run taught him the value of trust, teamwork, commitment to a goal, and total focus to the task at hand. “It really changed us,” he says. “It made friendships deeper and gave us a greater understanding of ourselves.”