Tommie O’Toole (’78, P ’07) lives every sports fan’s dream. He’s covered some of the biggest events of the last 30 years, including 18 Final Fours (beginning in 1985, Villanova over Georgetown) and 11 Olympics (beginning in 1992, the Albertville Winter Games). With USA TODAY since 2000, he’s now assistant managing editor in charge of content for the sports department. At the recent 2012 Olympics in London, he was USA TODAY’s editor for gymnastics coverage.

What will you most remember from covering women’s gymnastics this year?

Most people would remember Gabby Douglas in the all-around, but I think for me what resonates is the team competition when the USA went first on vault, and Gabby, Jordyn Wieber and McKayla Maroney all nailed their attempts to put the Americans ahead right from the start, and they never looked back, routing the Russians in what one U.S. coach called “a good, old-fashioned shed-whupping.”

Did you catch any of the Wake Forest Olympians?

Missed the Wake women at the field hockey and the men’s basketball in person. We had four TVs in our office in real time and could watch any event we wanted as it happened. As for other events, I got to track, beach volleyball, Wimbledon, a little field hockey and archery, which was at Lord’s Cricket Ground and really cool.

Of the 11 Olympics you’ve covered, what was your favorite one?

Lillehammer 1994. Wonderful location. Incredible venues. I was primarily covering ice hockey and one of the rinks was inside a mountain, a facility left over from World War II. The town was beautiful, and there was a lot of drama, particularly with the figure-skating scandal. Remember Tonya Harding? 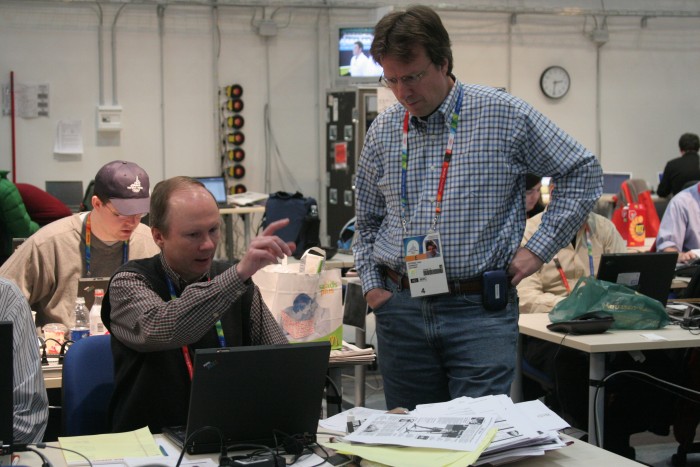 This may be an impossible question to answer, but what’s the one Olympic moment that stands out the most for you?

It’s actually pretty easy: Being six rows from the track just in front of the finish line when Usain Bolt won gold and set the 200-meter record of 19.30 in Beijing. I could see him cross the line as the clock read “WR.”

What’s your most memorable Final Four?

Probably the first one with Villanova defeating Georgetown (1985). But 1990 with UNLV just destroying Duke was pretty enjoyable. That was the height of the NIKE “Just do it” campaign, and after the game the Vegas players were all wearing hats that said, “Just did it.”

You’ve also covered the Penn State scandal; how long do you think it will take Penn State to recover?

At least an entire recruiting cycle of four years. We really don’t know what kind of coach Bill O’Brien is, so how he handles things will determine how much longer the rebuilding takes. A lot depends on how this year’s team reacts and if the fan base pulls together, which I believe it will.

And you’ve covered the ACC; do you ever make it back to Wake Forest for football or basketball games?

We made it at least once a season when our daughter, Jacqueline (’07), was a student trainer for the football team. Her senior season was the Orange Bowl year, and we went to that game as well. But football and basketball seasons have been my busiest times so it’s tough to get away. Last home basketball game I saw was when she was in school.

The Olympics, Final Four and everything else you cover: Pick one: what’s your favorite event or sport to cover?

College football, because of the tradition. Plus, I love being on college campuses.

In your four years at Wake, the football team won 10 games and lost 34 (6-18 in the ACC). Did that record of futility spark your interest in being a sports writer?

I knew in 10th grade I wanted to be a sportswriter, and one of the big reasons I came to Wake was because it did not have a journalism major. I got a lot of advice in high school to go to a good liberal arts school and get practical experience. I worked at the Winston-Salem Journal during my four years at Wake, started my career in Knoxville, Tenn., went to the Atlanta Journal-Constitution and then Scripps Howard News Service in D.C., and then USA TODAY. As for the football team, I had a lot of friends on it back then, including my best friend from first grade, Steve Young (’78). They had some good athletes and set the foundation for the Tangerine Bowl at the end of the 1979 season.

Now that you’ve been promoted to assistant managing editor, does that mean your days on the road are over? And I’m sure Wake fans will want to know … we’ll see a Wake Forest sports story on the front page of USA TODAY’s sports section every day, right?

Well, I’ve spent the last several years as college editor and haven’t travelled as much as I used to. But I will still get to a few places. As for Wake, just ask (athletics director) Ron Wellman: During the Orange Bowl season alone Wake got enough coverage from us to last a while. We’ll do something from time to time, like the baseball coach donating his kidney to a player. That was an incredible story. And I’m still waiting for a Wake golfer to win the Masters. There have been some close calls since Arnie.