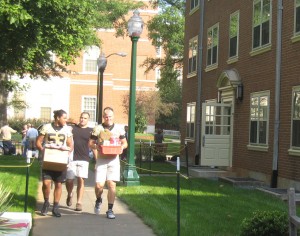 It’s been 34 years since Dave Alpeter (’82, MD ’86) hauled a stereo and suitcase up the stairs to his freshman suite in Poteat Residence Hall on a blistering hot August day.

His daughter, Lindsey, had a considerably bigger load when she moved into her air-conditioned room on the third floor of Bostwick Hall – not to mention the assistance of members of the football and volleyball teams, who helped new students lug suitcases and large screen TVs and stuffed animals and golf clubs into South Campus residence halls today.

Alpeter and other alumni whose children followed mom or dad or both to Wake Forest say they tried not to be too pushy – it’s their children’s college experience, not theirs, after all – but acknowledged they were thrilled to move their children onto the campus that evoked such happy memories. 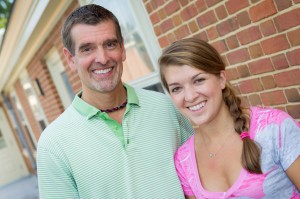 For Alpeter and his wife, Kathy, it was their second move-in experience; son David is a junior. Alpeter, who lives in Darien, Conn., says he hopes Lindsey will discover what he found at Wake Forest. “Both my undergrad and medical experience were phenomenal. I hope she finds the friendships and camaraderie and the incredible learning environment that I found here. I know she will, and she’ll have the same experience that I had.”

He still keeps up with seven of his college friends who meet at least once a year for “Deacon fest” – reunions that have included trips to football games at Stanford and Florida State. They’ll get together twice this fall: for their 30th reunion in September and the Notre Dame football game in South Bend in November. 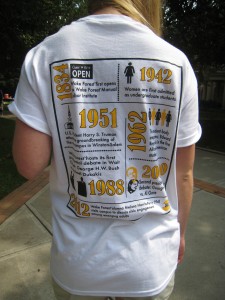 A student academic adviser displays some Wake Forest history on her shirt.

Alumni with children in the Class of 2016 graduated when there were still large oak trees on what was then the Quad, years before it became Hearn Plaza. The snack pit, aka snake pit, was in Reynolda Hall, not the Benson University Center. South Campus was the women’s side of campus, where men signed in at the formal parlors to visit and visiting hours included frequent shouts: “Man on the hall!” Only men roomed on the Quad until women moved into Efird. There were no national sororities, computers or Deacon One cards. South Residence Hall and Greene Hall, and for the older alumni, Collins Hall and the Benson Center, didn’t exist.

But enough has remained the same that alumni can still find their way to the Pit or the post office. John (’81, JD ’91) and Catherine Frier (’82) Korzen of Kernersville, N.C., said it feels like their lives have come “full circle” with daughter Kimberly coming to Wake Forest. John Korzen has taught in Wake Forest’s law school since 2003, so their three daughters have grown up around the campus. 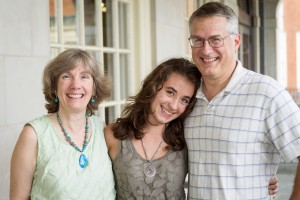 “It’s really wonderful because we both had such a terrific experience here,” said Catherine Korzen, who shares that she’s been to almost every Lovefeast since 1978. “Wake Forest has kept the things that we loved about it and improved other things.”

After their oldest daughter chose another university, they supported middle daughter Kimberly when she, too, preferred to look elsewhere for college. But when Kimberly Korzen listed her top criteria for what she wanted in a school, Wake Forest rose to the top of her list.

Catherine Korzen says she had a simple question when they visited other schools: How many professors attend former students’ weddings? Provost Emeritus Ed Wilson (’43) and history professor Jim Barefield not only attended the Korzens’ wedding, but Wilson read scripture, too. “That says volumes about the school — that kind of connection between professors and students.” Catherine Korzen says. “I still remember all the people who were so kind to us and looked after us.” 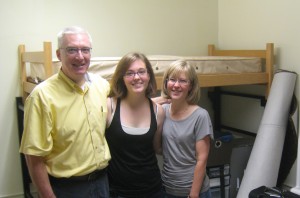 Greg (’82) and Lennis Pearcy (’81) Livesay of Greensboro, N.C., helped their daughter, Caroline, settle into a surprisingly spacious room in the basement of Johnson dorm, just a couple of months after celebrating son Grant’s graduation on Hearn Plaza.

“We expect this to be her own, incredible, unique experience, but the fact that she will be living it on the campus that we have loved is almost like watching her walk through a dream,” said Lennis Livesay, who started her Wake Forest experience in the basement of Bostwick dorm. “I will be so happy if she has a wonderful four years, so that the rest of her life she can close her eyes and be back at this point.”

It wasn’t a forgone conclusion that Caroline would become a Demon Deacon like her parents and brother, Grant. She was determined not to like Wake Forest, she admits, but agreed to take a campus tour last year. “We were walking through on our tour, and I waited for them to catch up, and I said, ‘Oh, no. I love it here.’ It feels like home.” 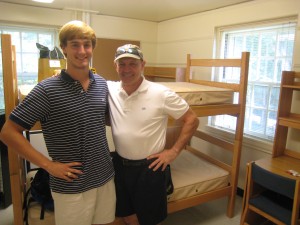 “We started coming to campus before he could walk, so I tried to indoctrinate him early. I brought him to every football game that I could,” says Bryant, who played free safety and was a special teams captain for coach Chuck Mills. “I hope he gets that good sense of community that I had. I have always kept that with me.”

If having one child enroll at Wake Forest is good, having two is even better. Chuck (’83) and Kim Fox (’84) Millsaps, who live in Raleigh, N.C., are thrilled that daughter Sarah has joined her brother, John, a senior. Why did they both choose Wake Forest? 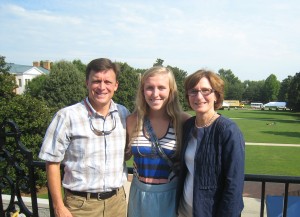 “I think it has to do with the stories they’ve heard us tell about the wonderful times that we had here and the stories about our professors – how we played tennis with our professors, went to their houses for dinner and babysat for them,” Kim Millsaps says. “And the friends of ours that they have met, when they make those connections to the stories that we’ve told about those people, that’s connected them to Wake Forest.”

Roddey (’84) and Martha Player of Charlotte have two children enrolled now, too. As if her parents and older brother, Roddey Jr. (’13), hadn’t indoctrinated her enough in the “Wake Forest way,” freshman Kate Player attended Deacon Camp, a pre-orientation program to expose new students to Wake Forest traditions that includes a visit to the Old Campus. 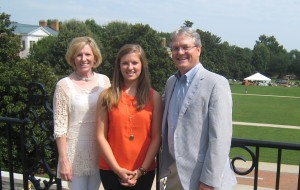 Roddey (\’84) and Martha Player with their daughter, Kate.

“It’s the perfect place for her,” Roddey Player says. “I had a great experience when I was here. It’s such a wonderful community; she’s already felt like a part of the Wake Forest community, the Wake Forest family, and now she’ll be a bigger part of that.”