The newly renamed Alumni Hall was dedicated Sept. 20 with a hope that it will become as hallowed as its namesake on the Old Campus.

“Rather than put a single person’s name on the building, we are naming it for all alumni who love and support this University,” President Nathan O. Hatch said at the dedication, held during Homecoming 2012.

Previously called the University Services Building, Alumni Hall houses the Alumni and Advancement offices and the Residence Life and Housing office. It was renamed this summer after the Alumni Building that once stood on the Old Campus.

Provost Emeritus Edwin G. Wilson (’43), who took English classes in the Alumni Building and later returned to teach there, still has fond memories of the building, he told a crowd of alumni gathered for the dedication in the lobby of Alumni Hall.

“The building was plain and simple and yet it provided the two things that were most important about Wake Forest in those days — a place to learn and a place to have friendships,” he said. “The close relationships between teachers and students that some schools dream about, we had.”

When Wake Forest moved to Winston-Salem in 1956, Wilson said the last place he visited on the Old Campus was the third floor of the Alumni Building where the English department had been located. The building was empty and he lamented that it would be forever dark. 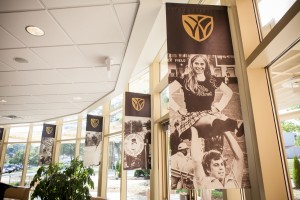 Banners with old photos line the lobby of the Alumni Building.

“Now the lights have come on again,” he said. “May this building bring to the alumni of this campus the same sweet and lasting memories that the Alumni Building in Wake Forest brought to me and my contemporaries. Whether we are in Wake Forest or in Winston-Salem, Wake Forest is a school to be honored and loved. And for me, Wake Forest alumni from both campuses are still unrivaled by any.”

Alumni Hall was built behind the Worrell Professional Center in 1998 for the Information Systems department and was originally called the IS Building. After Information Systems relocated several years ago, other departments moved into the building and it became known as the University Services Building. Longtime University Advancement staff member Robert D. Mills (’71, MBA ’80) was recognized at the dedication for first suggesting that the building be renamed to honor alumni. 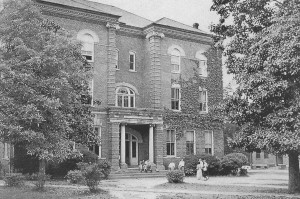 The original Alumni Building was built in the early 1900s with donations from alumni. With only a handful of buildings on campus, the growing college needed more classroom space, especially for its new medical school, which opened in 1902. Professor of Latin John B. Carlyle (MA 1887) took on the daunting task of raising money for the building and eventually raised $16,066.78, plus another $2,500 for equipment. Construction began in 1904 and was completed two years later. 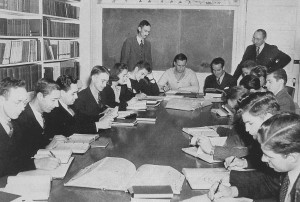 Professors E.E. Folk, at left, and Broadus Jones teach an English class on the third floor of the Alumni Building in 1940.

The Alumni Building was located on the edge of campus between Wake Forest Baptist Church and Hunter Dormitory. It initially housed classrooms and laboratories for biological sciences and the two-year medical school. After the medical school relocated to Johnson Hall in 1933, the building was used for mathematics, physics and English classes. The U.S. Army’s finance school used it during World War II.

The building survived several fires and Hurricane Hazel and was eventually torn down after Wake Forest moved to Winston-Salem. Its cornerstone was saved and is on display at the Wake Forest College Birthplace Museum near the Old Campus. A replica of the cornerstone is located outside the new Alumni Hall; the inscription on it, in Greek, reads “for truth.”