When he became a father for the second time at 42, Paul Garber (’86) recalls asking himself, “Do I really want to run around with this pink Vera Bradley baby bag on my shoulder?”

That was several years ago; today Garber shares thoughts and resources on older parenting through his blog, “Fathers After 40,” that explores biological and social issues of older fatherhood while celebrating the joys that come with a growing family.

He has coined the term “full-nesters” to describe those who become parents later in life, and he writes about his own family and invites readers to share their stories. His topics include everything from the ticking of the male biological clock to children’s films that have stood the test of time.

Garber, who was an editor and the first multimedia reporter at the Winston-Salem Journal, left the newspaper business after 19 years last spring to pursue freelance writing. Though he had blogged during his days at the Journal, he seized the opportunity to focus solely on things he enjoyed writing about.

His parents (mother Betty worked in the Wake Forest development office for several years) were both in their 40s when he was born, says Garber, and he was 42 when his second child, daughter Delaney, arrived. He was one of a “second generation” of children born to his parents later in life. “Seeing the gap between my mother and daughter made me see a gap between children and older parents,” says Garber, who also has a son, Sean, with his wife, Desiree.

Growing up, he knew his life was different from that of his siblings from the “earlier generation.” “I never met either of my grandfathers and they had,” he said. “My family was much more nuclear by the time I came along and that made the family dynamic a lot different. My parents were more settled. There was a lot of stability when my brother and I came along.”

Many headlines related to “full-nesters” focus on risks such as genetics, says Garber, who has master’s degrees from Johns Hopkins and UNC and teaches a mythology and human culture class at Forsyth Technical Community College in Winston-Salem. “That’s important, but I’m trying to say there’s a wider range of what older parenting is about. There are advantages associated with maturity such as confidence, patience and financial stability. I try to chronicle the big picture and not just the risks,” he says. 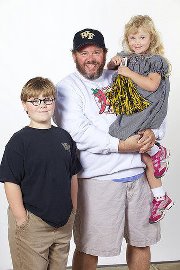 The Garbers with Deacon gear.

Though his blog is titled “Fathers Over 40,” Garber says it’s not just applicable to dads. It’s helpful for moms and grandparents to understand a dad’s perspective on children’s literature or how it feels to walk around with that pink diaper bag.

At Wake Forest, Garber majored in psychology and planned to pursue a career in the field before entering journalism. “David Catron’s class opened my eyes about the importance of family dynamics and how people are raised through the stages,” he says. “It was fascinating and eye-opening, and I reflect on the class quite a bit.”