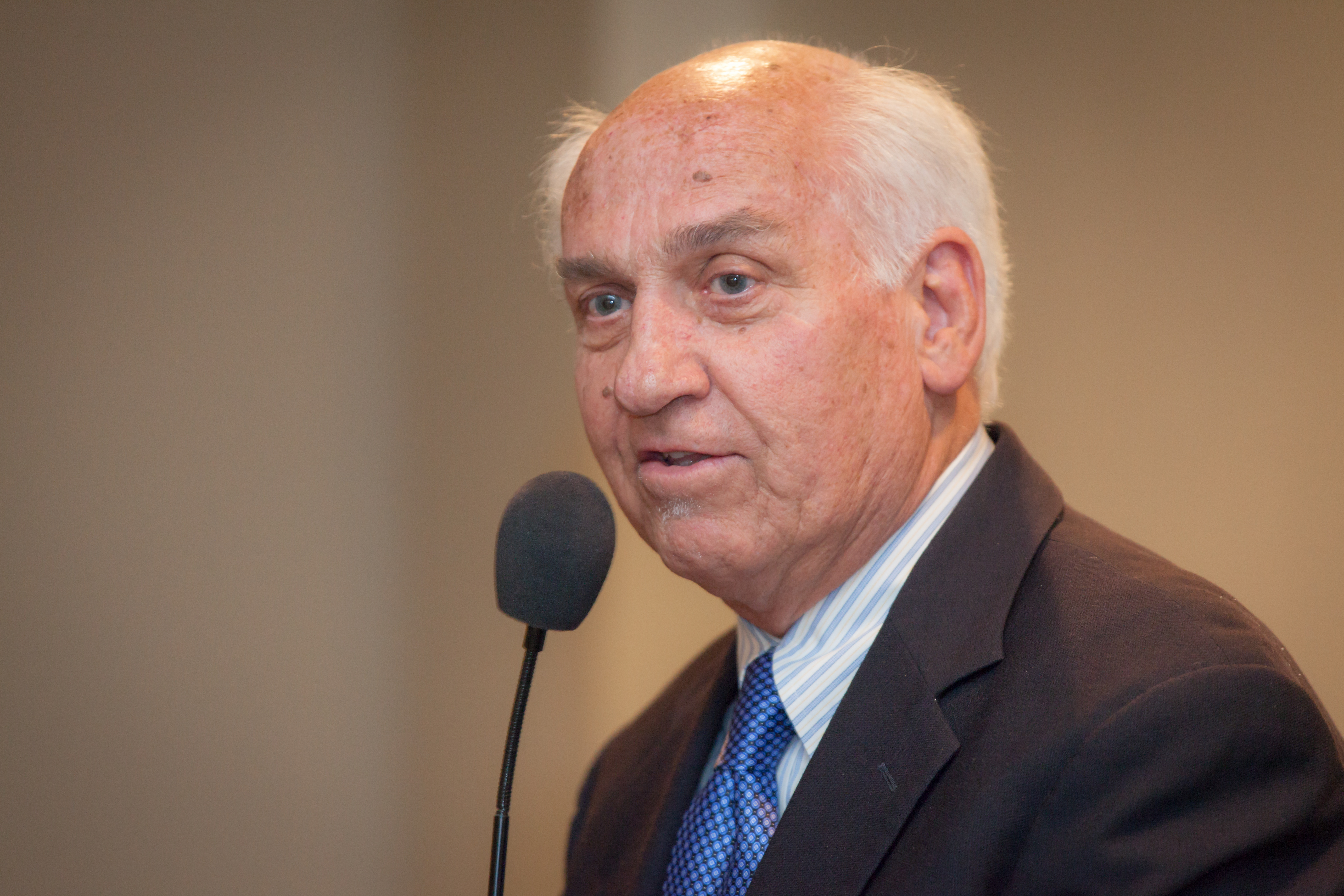 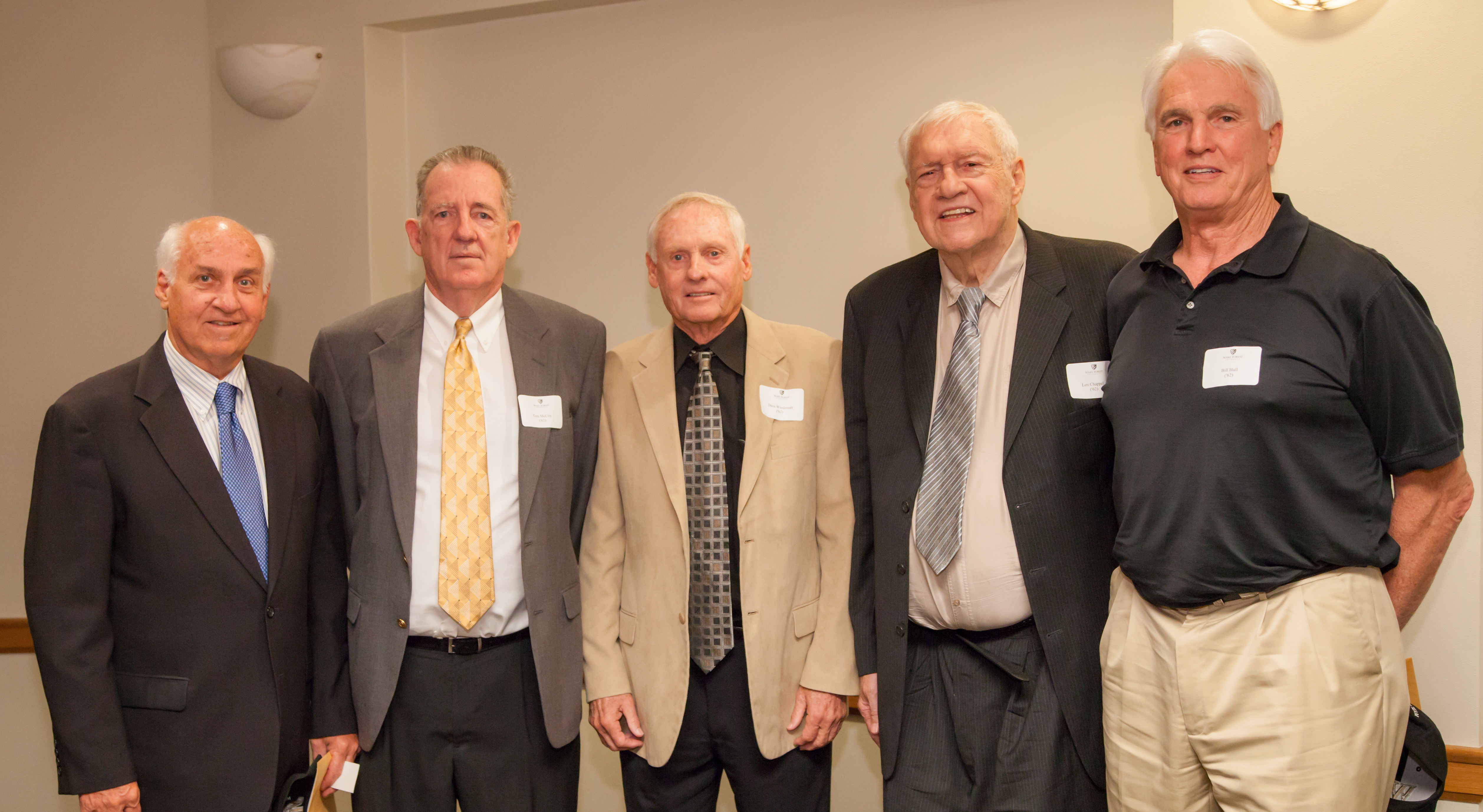 The team, ranked third in the country entering the 1961- 62 season, stumbled to a 9-8 start but went on to win the ACC regular season race, the ACC Tournament and three games in the NCAA Tournament (two in overtime), before losing to Ohio State in the national semifinals. Wake Forest defeated UCLA in the consolation game to finish in third place in the country. Packer and teammates Tommy McCoy (’62), Dave Wiedeman (’62), Len Chappell (’62) and Bill Hull (’62) were honored during the luncheon. The following was adapted from his remarks and an interview. 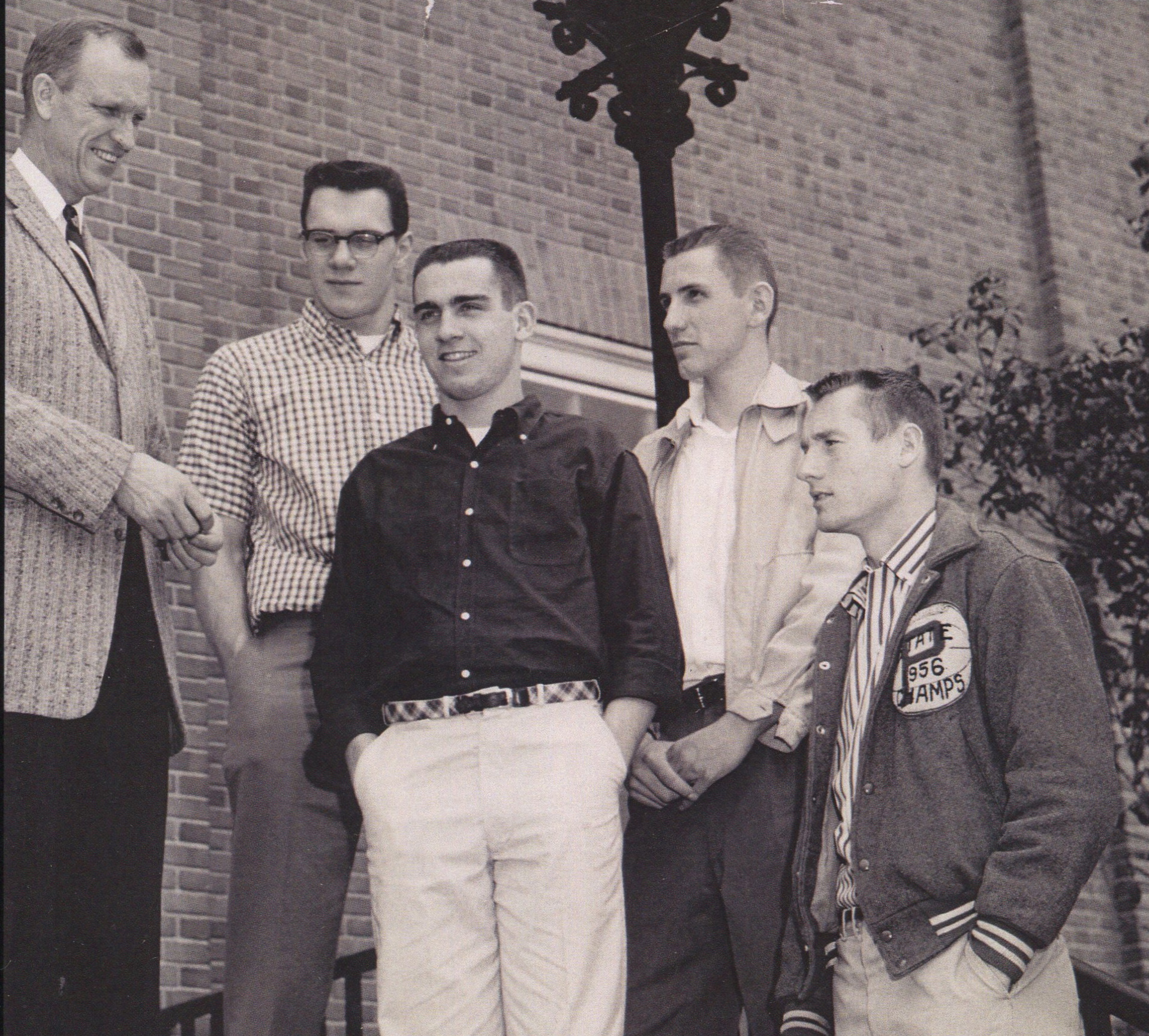 Billy Packer (center) with Coach Bones McKinney and teammates on the steps of Reynolds Gym.

On why he came to Wake Forest:

I came to Wake because I really wanted to go to Duke. I knew in the ninth grade I was going to Duke. My father said enough with this recruiting stuff, you know where you want to go. Let’s call up Duke and tell them you’re coming. He gets on the phone and tells me that Duke is trying to decide between me and another guy; they’ll let me know in a few weeks. I said call them back and tell them I’m going to Wake Forest and beat that kid. My mother said you don’t know anything about Wake Forest. I said I know they play Duke, and that’s why I’m going. So I didn’t know much about Wake Forest. I’ll never forget when someone said we had chapel twice a week. I’m thinking, Are you kidding me? That’s a waste of an hour. Fifty years later, when you look back, it’s probably the greatest thing that we ever had. To think that everyone of us would get together twice a week and have a common bond about this great University, that was very special. 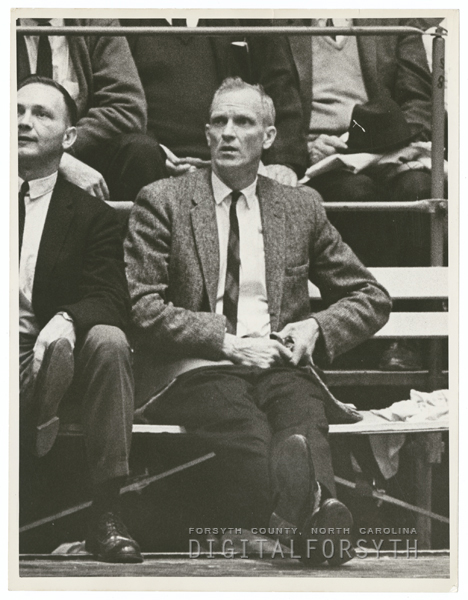 On Bones McKinney, Baptist preacher, larger than life personality and basketball coach from 1958 to 1965:

He used to come and get me on Sundays so he could go preaching. I’m Catholic, but I could drive. Bones wasn’t a good driver; it’s hard to drive with three Pepsis between your legs and eating Nabs and not paying attention. I’d take him to these chapels and he would make these unbelievable speeches.

Without question, if television had been around back then, he would have been the No. 1 television coach in America. When Coach was at his best was in crisis time; he could lock in when it meant something. He could figure out game plans within the confines of the game itself. He coached a level of toughness. Our team had a level of mental and physical toughness, more so than just ability, and a lot of that came from him.

He was one of the most interesting people who’s ever been a part of Wake Forest and the state of North Carolina. He was the No. 1 preacher in the state other than Billy Graham. He was the greatest public speaker that I’ve ever heard. His delivery was as great as a Jack Benny or a Jay Leno. 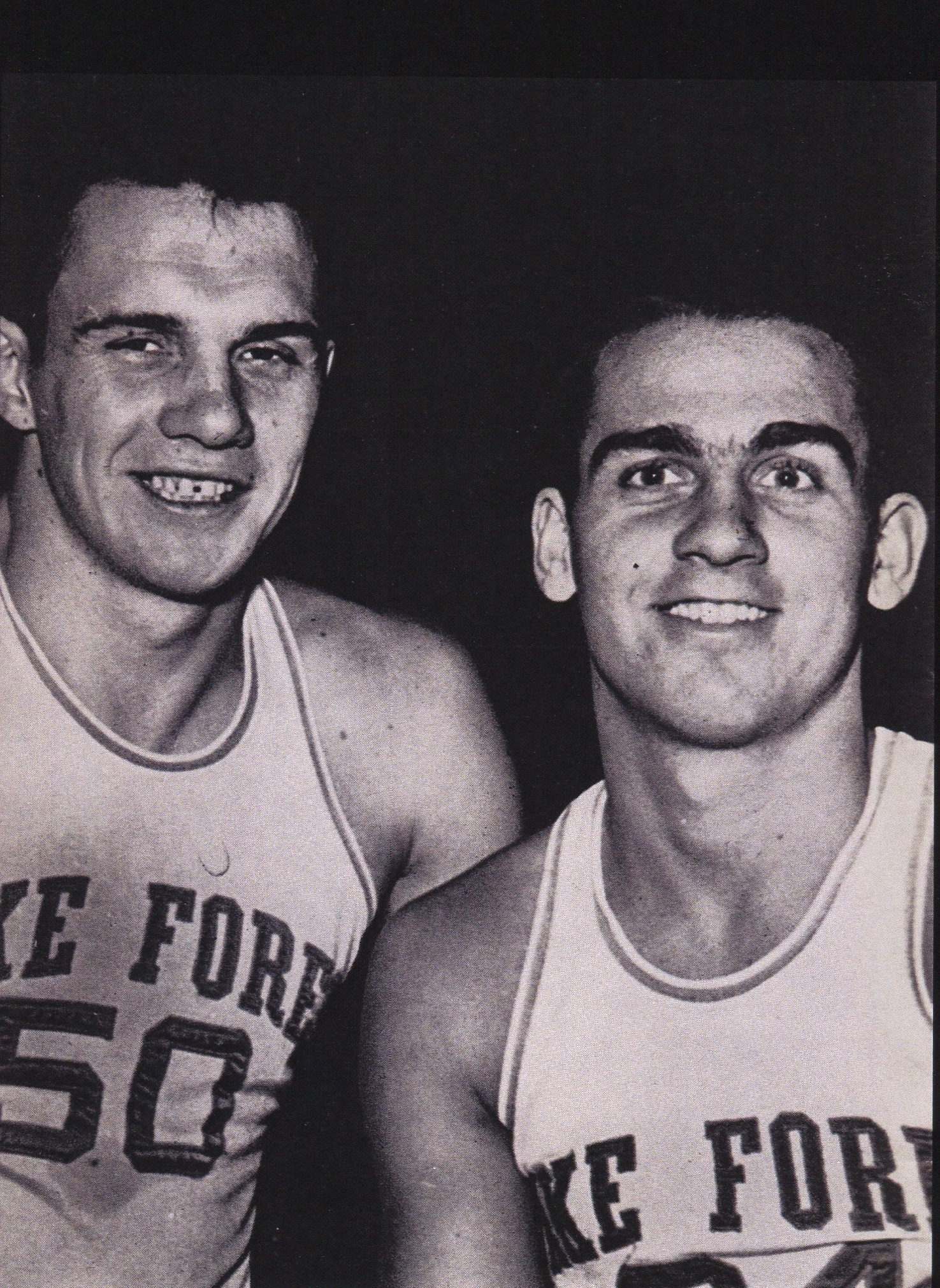 Without question, the only player that I’ve seen in ACC history – and I didn’t see Dickie Hemric play – that could match what Lennie did as a rebounder and scorer and as a presence on the court is Tyler Hansbrough. Incredible speed, incredible hands, ability to score inside, ability to punish people, ability to shoot outside, ability to rebound in traffic. Not only do I think he’s the greatest player at Wake, he’s also one of the greatest to ever play intercollegiate basketball.

On a game at North Carolina:

Frank McGuire was the coach – Dean Smith was an assistant in those days – and he wore $1,000 dollar suits, and this was in 1961. Bones McKinney, his entire wardrobe couldn’t have cost $50. Frank McGuire had these incredible cufflinks. His trademark when he’d have you down at the end of the game he’d call time out and start fixing his cufflinks, like Red Auerbach would smoke a cigar. 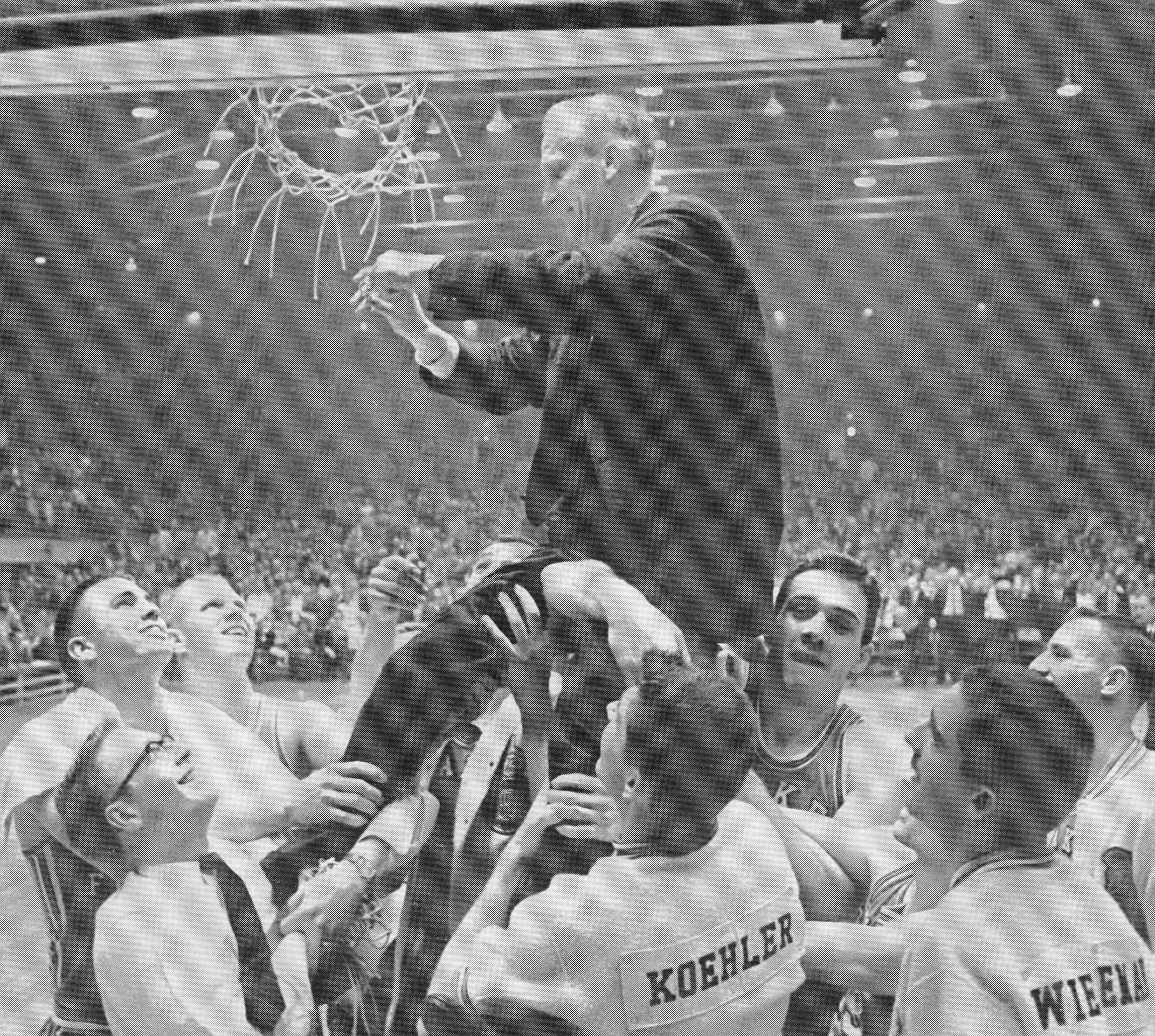 Coach Bones McKinney cuts down the net after Wake Forest wins the ACC Tournament in 1962.

We’ve got Carolina beat so bad that night, with two or three minutes to go, Bones calls a timeout. I think he’s going to take the starters out and let the other guys play. When we get over to the sidelines, Bones isn’t there. He’s out on the court, pretending that he’s fixing his cufflinks. The next possession, Bones calls another time out, and this time he’s fixing ‘em in the stands, walking up and down the aisles. He calls three time outs in the last two minutes just to say ‘Hey, Frank McGuire, take that.’

We got back to campus and the bus parks over by the gym and we get off the bus. Bones leans out the bus window and says ‘I’ll tell you one thing, when you whip Carolina, you celebrate! Get back on the bus.’ The bus goes over to the women’s dorms and he starts beeping the horn. About 2,000 of you people were out there, and we had one hell of a celebration. I think it started the tradition of throwing toilet paper in the trees.

On a game at South Carolina that was closer than it should have been: 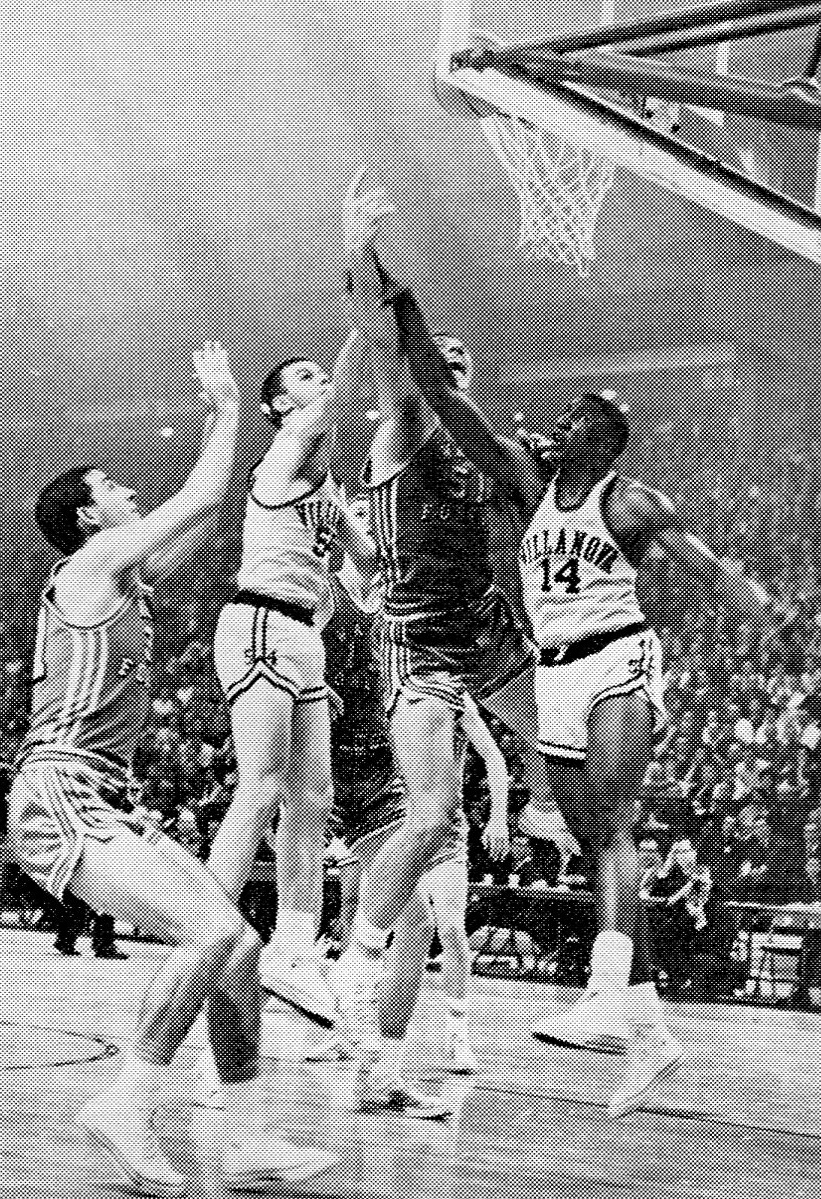 Len Chappell was ACC Player of the Year his junior and senior seasons.

Back in those days, you only had two referees, and there was a guy by the name of (Charley) Eckman and a guy by the name of (Lou) Bello refereeing that game that night. South Carolina had a lousy team and we never lost to South Carolina during our careers. But that night, they’re giving us a rough time. We have about a three- or four-point lead with about five minutes to go. The referees are killing us. Bones calls a timeout and tells the three big guys to play a triangle zone. He looks at Alley Hart (’61) and tells him to guard Bello. He tells me to take Eckman.

We walk out on the court, and I thought I’d have some fun with Eckman, so I get down in a defensive stance. He says ‘I don’t know what you’re doing, but you’re going to be thrown out of the game unless you can tell me what you’re doing.’ We go over to the bench, and Bones says, ‘I’ll tell you what I’m doing. If you’re ever in a tight game, a game you oughta win and you’re not winning, take your three big men and put ’em in a triangle zone, and take your two guards and put them on the two guys who are causing the most trouble, and that’s you and Bello.’ 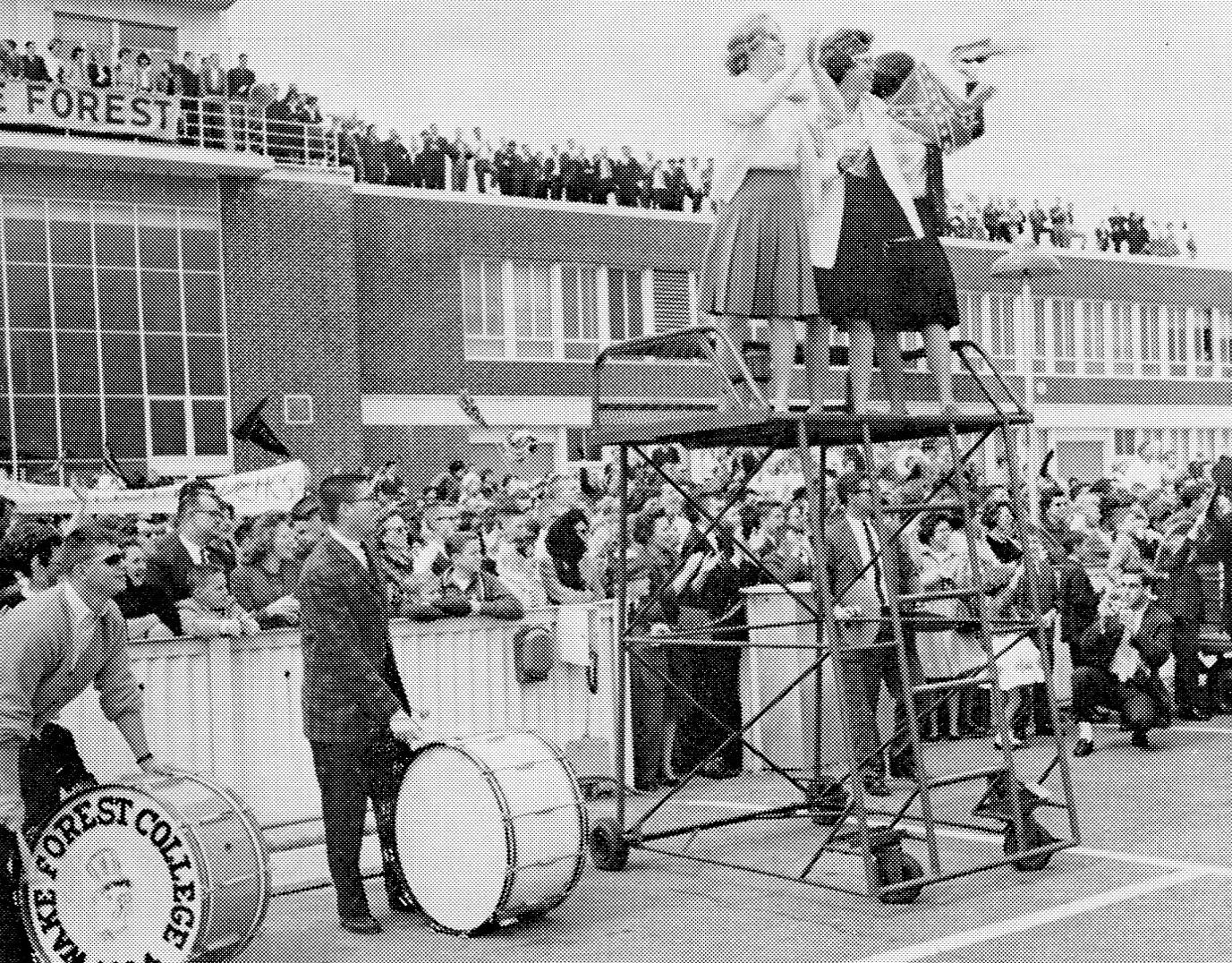 A large crowd welcomes the team back to Z. Smith Reynolds Airport following the Eastern Regional Championship win over Villanova in 1962.

Seven of our 12 guys were injured, we can’t even have a practice. The two best players on intramurals are Bill Hull and Norman Snead. I took them out to Bones’ house to watch game film. Bones never did understand how to run one of those film projectors, so he puts the film on and it’s backwards. He says lay on the floor and we’ll watch it on the ceiling. It’s not making any sense at all. Bones says let’s go in the bathroom, and he shows it on the wall and we watch it in the mirror, and that doesn’t work. Norm and Bill are ready to quit. So I said coach why don’t they just come to practice early Monday, and we’ll work with them on fundamentals, and he said that’s a good idea. That’s what started Bill Hull’s incredible career as a two-time All-ACC player in football and basketball.