Were I an exhibitionist, I might have more happily embraced the maelstrom of international media attention I received last week.

As someone who has worked both as a journalist and a teacher, I thrive best when telling the stories of others. Therefore, my head spun as I watched an endless stream of TV, print, radio and web-based news sources broadcasting basic details of a hitherto private life.

In the last moments of my private life, I visited the hospital room to officially meet the mom and newborn baby whose lives had intersected with my own earlier that day. That morning we had been complete strangers, living in the same town but speaking different languages and leading very different lives. Then, while both waiting at a bus stop on the UNC campus in Chapel Hill on Wednesday, Nov. 7, the woman I now know as Elizabeth Lopez went into labor. Her friend recruited my help, and within 10 minutes the baby quite literally fell into her pants — a miraculous and precipitous beginning. Our paths crossed at a critical moment.

With my toddler son, Dylan, at my side I called 911 and followed the dispatcher’s instructions about cleaning the baby’s air passages, finding a shoelace to tie around the umbilical cord, keeping the baby warm and comforting the mother while waiting for the paramedics to arrive. In our 10 minutes together, we forged an intimate connection as two mothers. After the medical team arrived, I snapped a picture with my phone of the mom and baby; I never wanted to forget them. 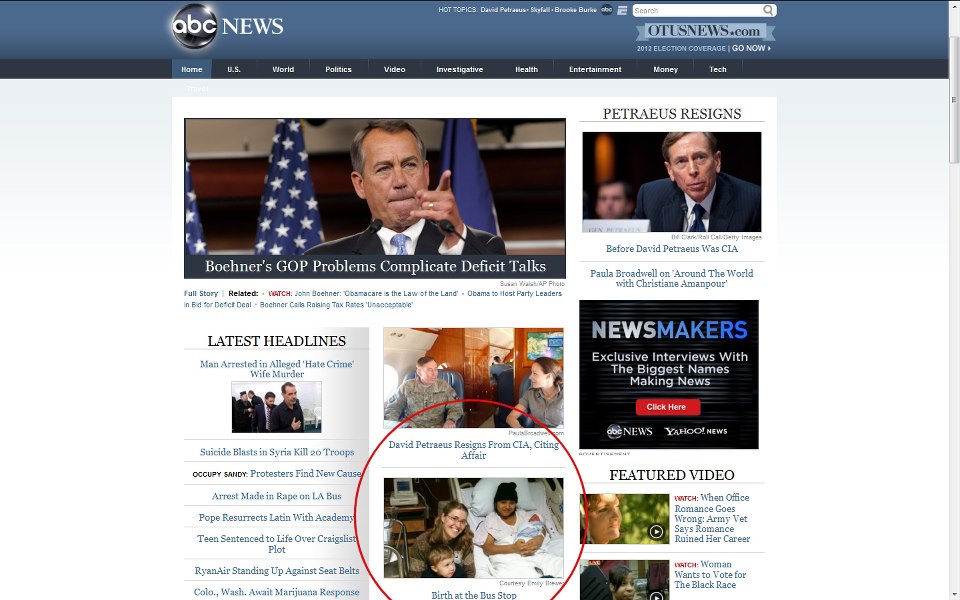 After the rescue van whisked Elizabeth and baby off to the hospital, I needed to share this experience and posted a quick Facebook update: “Dylan and I just witnessed and participated in the fastest labor and delivery imaginable. In a bus stop. In front of Abernethy Hall. Wow!” I then boarded the bus with my son, who was ready for lunch and nap. On our way home, my phone rang. My friend Mike Hobbs is communications director for UNC’s School of Education, just a few blocks from the now-famous bus stop, and he had heard the sirens from his office. He saw my update and, a career newsman, immediately wanted to hear the whole story. He asked if he could call the editor of The Chapel Hill News. A few hours later, reporter Tammy Grubb called to interview me. It was after that interview that my husband, son, and I went to the hospital to formally meet the mom and baby, whose names I still did not know. I needed to see that they were okay.

The Chapel Hill News story appeared online late that Wednesday night, along with the picture I had snapped, and Raleigh’s News & Observer ran the story on B1 the following morning. Local friends called and emailed to congratulate me. Then, by 10:30 a.m., my phone started ringing. It did not stop ringing for several days. By Thursday afternoon, Dylan and I had given in-person, on-campus interviews to Julia Sims of WRAL-TV and Caitlin Knute of ABC-11, while the NBC-17 crew had found my address and had staked out my home. After the TV news crews left, the student-run paper, The Daily Tar Heel, sent a reporter and a photographer to meet me, and, during that time, my cell phone voicemail and my email inboxes filled with new requests from as far afield as the London Daily Mail.

I still had a 2-year-old to care for, and I was exhausted by the attention and requests. By that evening, the story had gone viral. The AP Wire picked it up. People shared the online TV news stories and print stories on their Facebook pages and in tweets. Others reposted and retweeted. Some blogged. Each story got some or other small detail wrong, but I realized that if I didn’t agree to talk to the press, the story would go forward without my input. NPR never called, but several friends told me they heard about the story on “All Things Considered.”

On Friday morning my husband, (Patrick McDonough, ’97), texted from work to warn me: “Good Morning America” was about to call. Already, basic details of my life — my name, age, hometown, occupation, and family life, as well as my and my son’s pictures — were circulating widely, and by the next day, I would be introduced to the country by perhaps the most established morning news program on television. I never had time to process the fact that I had gone from Emily Brewer, private citizen, mom, teacher of writing and literature, to Emily Brewer, good Samaritan and hero. Feeling that I had not done anything that any other mother wouldn’t have done, I did not understand how I had been lifted so quickly to fame and acclaim. 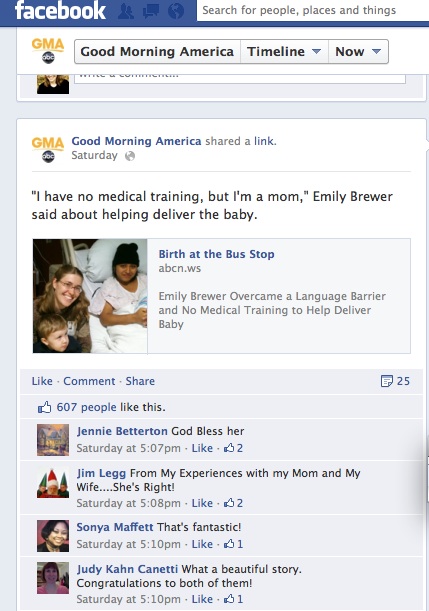 With a week’s distance from the event, I have come to appreciate why the media glommed on to the story. It was a copy editor’s dream; the headline writes itself: “Ph.D. Student Delivers Dissertation, Then Baby.” However, beyond the clever wordplay, the story hit the right chord just when it was needed. A week after the devastation of Hurricane Sandy and the day after the most ugly and polarizing election in history, the bus-stop birth occurred. This country desperately needed a story to uplift and inspire.

All of us hope that in our time of need someone will be there to help, and my small gesture seemed to restore people’s collective faith in humanity and remind people of the essential ties that bind us all. A mother, after all, instinctively understands every other mother on earth — and a story that reminds us of that fact threads the needle as we work to stitch back together an electorate torn asunder. This country needed new life. It needed a baby. I was merely the conduit through which this much-needed story traveled to the eyes and ears that yearned for it.

During the media wave that lifted me so quickly and unexpectedly to national fame, I felt exhausted and exposed. I ate and slept very little and lost almost 10 pounds. But I have been unimaginably honored and humbled by one very special gesture. The evening of the birth, when I had gone to the hospital to visit Elizabeth, she invited me to hold that sweet, wrinkly, 5 lb. 9 oz. baby, then snugly wrapped burrito-style in a hospital-issued baby blanket. I was so happy for them that they finally had a private room, in a sanitized setting, with a nurse right outside their door.

The slumbering 8-hours-old newborn grimaced as I lifted her into my arms. From her bed, Elizabeth looked on approvingly, deciding then to name her daughter after me, the “angel” who came to her rescue. By little more than a twist of fate, I am now a part of a stranger’s birth story and have a beautiful namesake growing up near by.