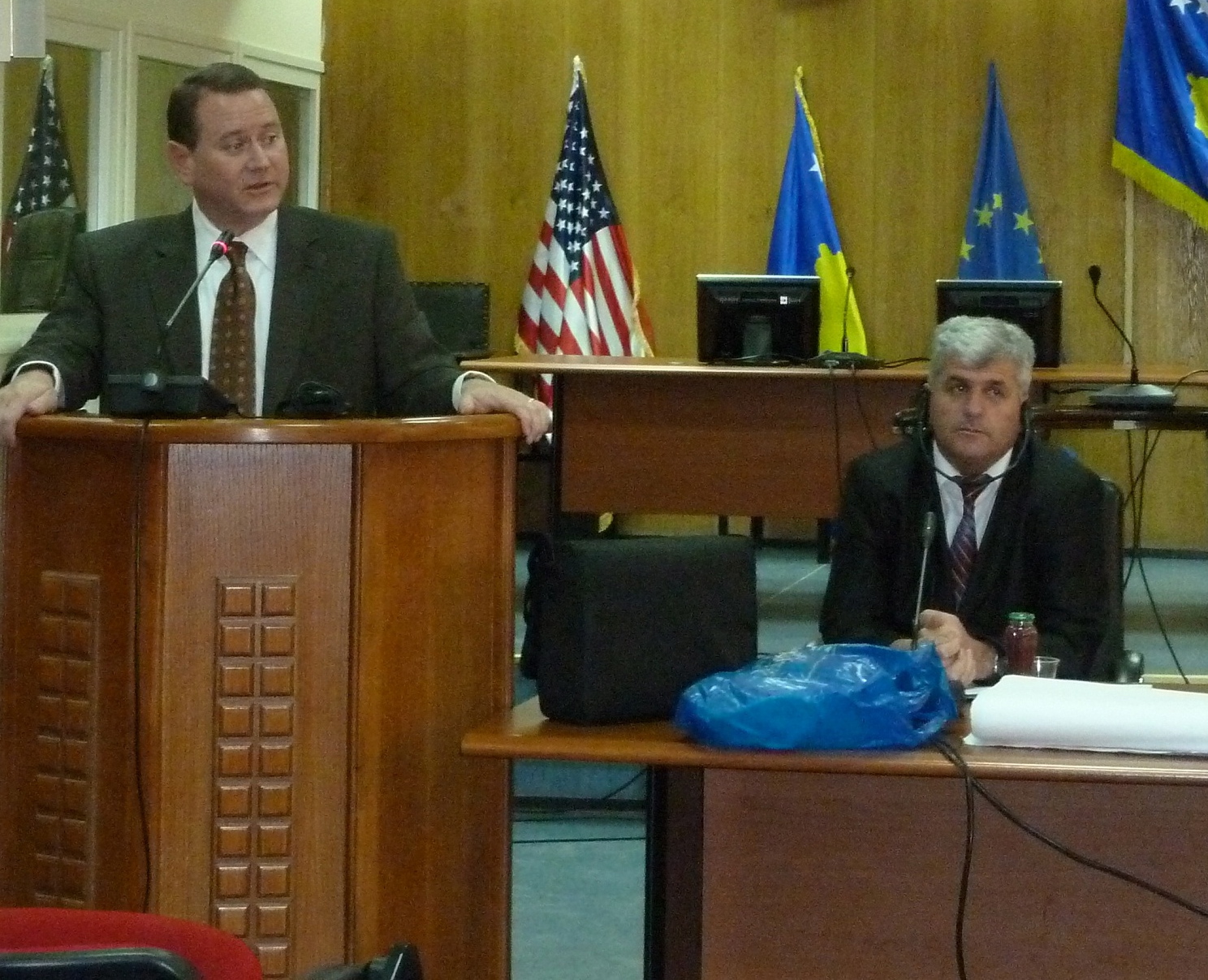 Bobby Higdon conducts a training session in Kosovo on the finer points of plea bargaining.

Robert J. “Bobby” Higdon (’85, JD ’89) hears heart-wrenching stories every time he visits Kosovo, where he is helping rebuild the country’s judicial system after decades of internal strife and war.

Higdon, an Assistant U.S. Attorney in Raleigh, N.C., spearheads an ongoing U.S. Department of Justice initiative to develop criminal and civil procedures in Kosovo, a part of the former Yugoslavia which declared its independence in 2008.

Higdon and Frank Bradsher (’82), also an Assistant U.S. Attorney in Raleigh, visit Kosovo frequently to train prosecutors, judges, defense attorneys and police officers. In the last three years, they’ve made about a dozen trips each to teach investigative techniques and legal procedures and to offer advice on ongoing investigations and trials. The program is the only one of its kind between a U.S. Attorney’s Office and a foreign country, Higdon said.

“We are so fortunate to live in a country where the rule of law is respected,” Higdon said. “We benefit so much from a court system and criminal justice system. It’s not perfect, but it functions really well and keeps us safe.

“In Kosovo, they don’t have that or they haven’t had that for so long. We feel it is incumbent to share what we can to help them. Otherwise there’s no explanation for why a couple of prosecutors from North Carolina get invited to go over to Europe to teach people in a country that’s existed a lot longer than ours.”

Kosovo is rebuilding its justice system with the scars of war still fresh. Higdon says he is frequently approached by people with terrible stories who ask for his help finding long-lost relatives. “Everyone has a war story or near-death experience or can tell you what family members were killed” during the war, he says. “Many will tell you they’re alive because the U.S. intervened and stopped the war.” 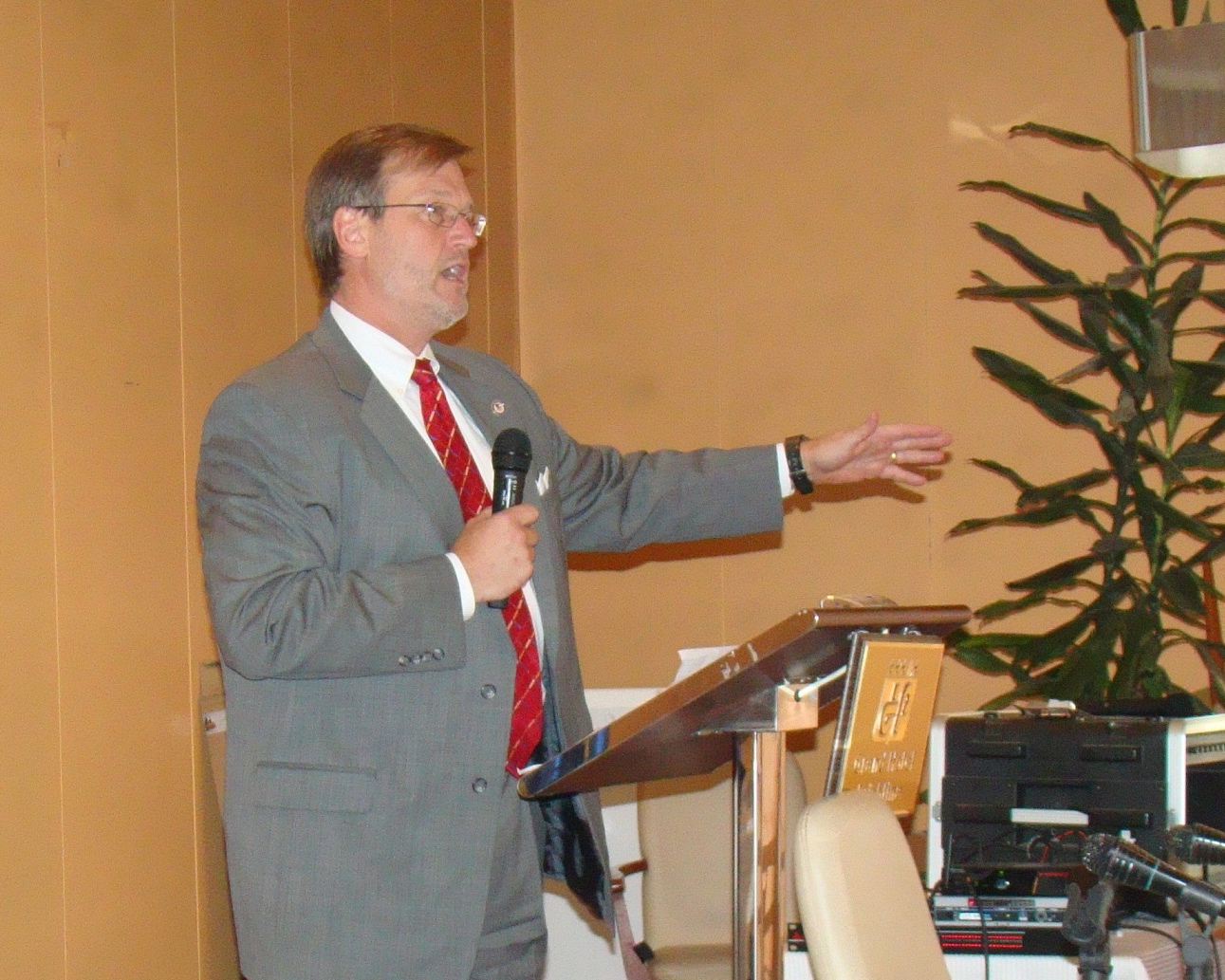 Frank Bradsher trains prosecutors on how to interview witnesses.

“It’s given me a great amount of satisfaction to be part of this,” Bradsher said. “I’m very grateful to be able to travel to another country and talk about the issues they have and how much we have in common, and talk about our sense of justice and rule of law.”

Four years ago the Justice Department asked attorneys in the Raleigh office to train lawyers in Kosovo on how to investigate and prosecute drug, money laundering and economic crimes and child exploitation. Higdon was chosen to lead the program, and he chose Bradsher to join him. After their initial visits to Kosovo, Higdon suggested making the program an ongoing effort, and the Justice Department is continuing to fund the initiative. 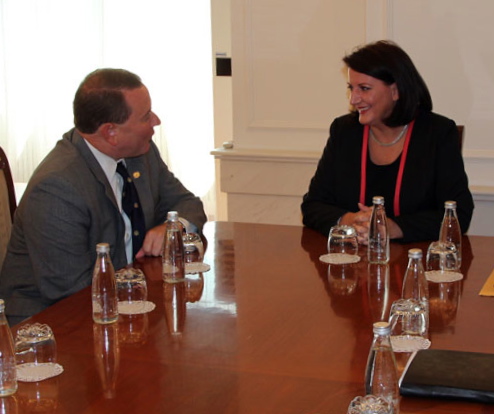 Higdon and Bradsher, along with FBI and IRS agents and other attorneys, travel to Kosovo every couple of months to train prosecutors and investigators on how to investigate cases, interview witnesses, and present evidence and testimony in court.

During a recent trip to the northern part of the country, near the Serbian border, Higdon found the court system there at a virtual standstill; because of a backlog of cases, few cases were actually resolved. He and Bradsher are training attorneys and judges to resolve cases through plea-bargaining to clear the backlog and get the wheels of justice moving again.

Prosecutors, defense attorneys and police officers from Kosovo also come to Raleigh for training. During one of their visits last year, assistant U.S. Attorney Nathan Huff (’01), took the group to a domestic violence conference in Winston-Salem. During another visit, Higdon asked Dick Schneider, associate dean for international affairs at the School of Law, to meet with the Kosovars. Schneider explained the law school’s LL.M. program, a one-year program for legal professionals from other countries. That led to three students from Kosovo – prosecutor Shqipdon Fazliu and judges Kreshnik Radoniqi and Valon Kurtaj – enrolling in the LL.M. program this year.

Higdon and Schneider both hope to see another group of Kosovar attorneys in the LL.M. program next year. Higdon credits the Department of Justice and Wake Forest for being open to the idea of students from Kosovo coming to the School of Law. 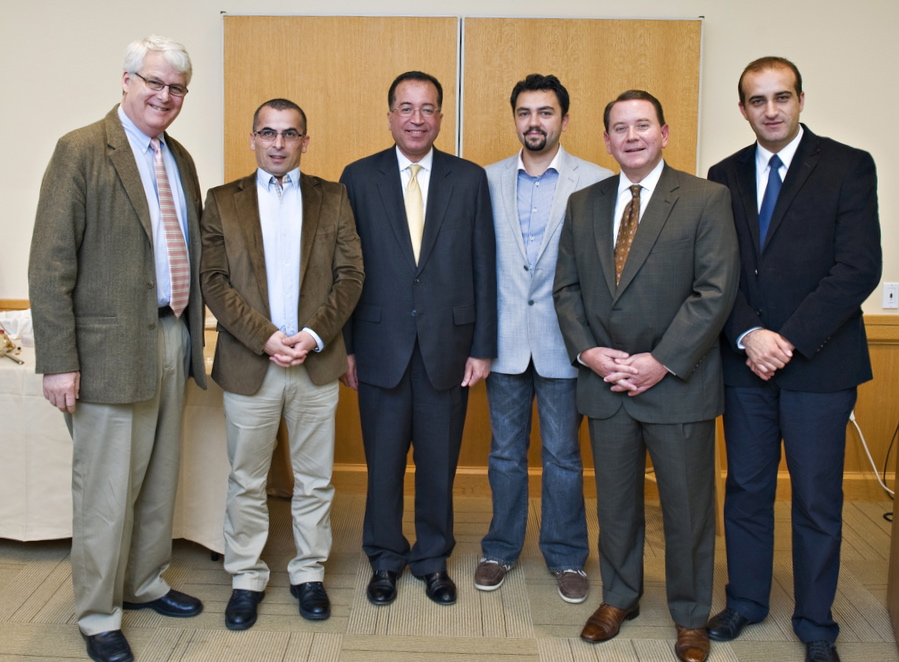 During a visit to the School of Law in October to meet with the three students from Kosovo, Higdon says he expects the students to complement the work that he and Bradsher are doing back in their home country. “We’ll continue to interact with them when they go back to Kosovo, and we’ll have a common Wake Forest background. We’d like to build a small army of Wake Forest-trained lawyers” to practice in Kosovo.