Once a week, Dave Johnson (’90) reports to the New York City Probation Office in the Bronx, just down the street from Yankee Stadium. But unlike the hundreds of others who trudge through the office to check in with their probation officer, he’s there by choice. Call him a poet officer.

A poet, playwright and teacher, Johnson holds an unlikely appointment as Poet-in-Residence for the probation office. “My job is to go in there and stir these guys up in the waiting room to get them to create poems, stories, rap. That’s what engages me,” he says, “to see that poetry can happen anywhere.”

Johnson, 43, thrives in unconventional settings. As a young poet, he once set up shop in a Madison Avenue chocolate shop to pen quickie Valentine poems for New Yorkers needing more than a box of chocolate to take home. During his two decades-plus in the city, he’s taught kindergarteners, graduate students and senior citizens. His latest gig has him engaging a vastly different audience, but the purpose is the same: to teach, while offering some hope and inspiration to those who need some help turning their lives around.

He was appointed Poet-in-Residence by See Change NYC, an initiative of Mayor Michael Bloomberg to reimagine many of the city’s public facilities to better serve at-risk populations. Waiting rooms at probation offices have been redesigned by some of New York’s top architects to create inviting “resource hubs” with brightly colored walls, comfortable furniture and computers. Education, literacy and community programs are offered to help probation clients — the old term “probationers” is passé — find jobs and other services. 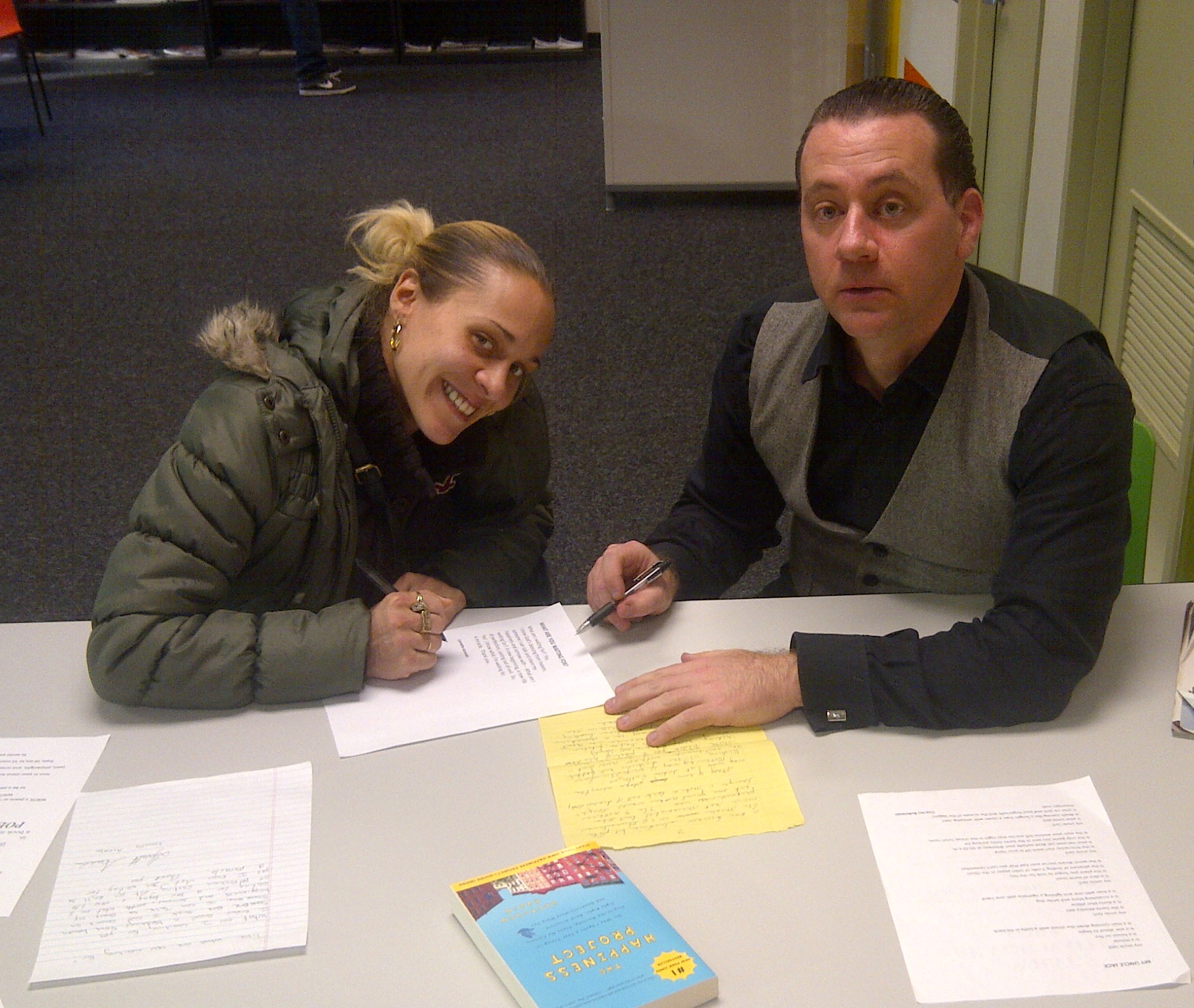 “What’s a poem going to do for these guys?” he asks before answering his own question. “It’s a starting point to not only express themselves, but a point where they can begin to see opportunities for success.”

At the probation office, he’s a poetry Pied Piper, moving here and there, striking up conversations with clients, mostly older men and women in the mornings, teenagers in the afternoons.

What are you waiting for?

In a place that’s all about waiting –clients may wait for hours to see their PO or probation officer — he poses an inviting question, “What are you waiting for?” He shares examples of poems about waiting – “And Don’t Think I Won’t Be Waiting” by Audre Lorde and “I Am Waiting” by Lawrence Ferlinghetti are favorites — and encourages waiting clients to share their stories.

“I try to get them talking in this space where they’d do nothing beside texting or listening to their iPhone,” he says. “I’m asking them to be involved in something that normally there’s no way they would even consider it, and to share it with me and other people.”

Many have responded with poems and stories and even ideas for movie scripts and a reality show. When clients proudly read out loud something they’ve written or see their poem displayed on a large-screen television in the waiting room, they gain a sense of personal satisfaction and achievement, perhaps for the first time, he says.

Johnson has lived in New York since graduating from Wake Forest with degrees in English and theatre. “I am a poet and playwright thanks completely to those two departments,” he says. He earned a master’s degree in fine arts from Columbia University.

What are you waiting for?

If he were staging a Broadway play of his own life, he’d need a large cast to portray his dizzying array of roles. There’s the poet who’s written “Marble Shoot” and edited “Moving,” an anthology of poems. There’s the playwright who’s written “Baptized To The Bone” and “Sister, Cousin, Aunt.” (“Sister, Cousin, Aunt” premiered at Wake Forest during the Year of the Arts in 1996 before playing in New York City and more recently, Italy.) He’s also written extensively for the theatre in New York and acted in off-Broadway plays.

But the starring role would be Teacher Dave. For the last 10 or so years, he’s cobbled together more than a full-time job — not to mention frequent-rider miles on subways and trains — teaching poetry and playwriting part-time at Yale, The New School University and Cooper Union School of Art. He’s also helping senior citizens write their memoirs through a project with the New York Public Library.

Recently, he’s added an unexpected role. Because of the success he’s had working with probation clients, he’s become an unofficial PO. Not unlike a college professor seeing the same students week after week, he works with many of the same clients every week. Some of those clients can now check-in with him and skip their regular check-in with their PO.

Johnson speaks like a proud teacher as he shares some of his clients’ poetry. “Especially in this population, it’s important to represent yourself,” he says. “They want to tell the public that they’re more than a statistic and stereotype. I want them to feel the sense of language and how to use language in a more effective and provocative way and how it will empower you. Poetry has done that for me.”