In March 1963, four smart, clean-cut Wake Forest students captured the attention of the campus – and a large national following – on the popular CBS quiz show “The G.E. College Bowl.”

Before an estimated national television audience of 22 million viewers on three Sunday afternoons, they won two rounds on the show, broadcast live from New York City, before losing to Kenyon College in the third round. 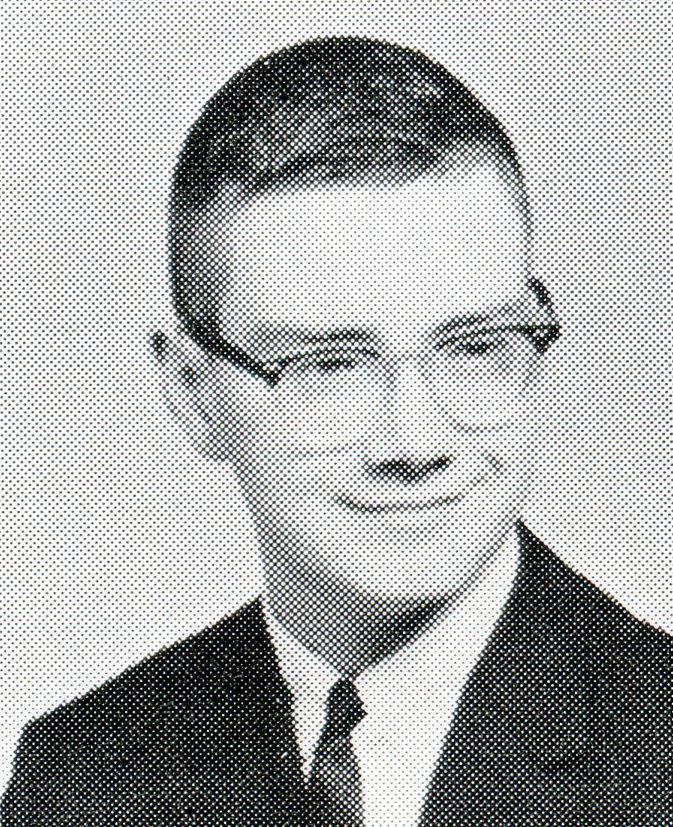 Shertzer, a retired art critic and reporter for the Palm Beach Post and Winston-Salem Journal who lives in Winston-Salem, said the College Bowl came at a pivotal time in Wake Forest’s history. “Wake was on the verge of growing out of just a North Carolina institution to becoming at least well-known on the East Coast.”

Diana Gilliland Wright still remembers the experience as being great fun. “It’s a cheerful jumble of images: going to some really nice restaurants and a couple of great Broadway plays; great fun having professional makeup people do your makeup; and going to a coffee place in New York and having people come up and say they saw you on TV, which seemed very strange.”

Wright, who lives in Seattle, Wash., earned a Ph.D. in Byzantine history in her 50s and has taught and written extensively. She said she thinks the team appealed to viewers across the country because they were from a Southern college and “were all really cute and wholesome, terribly wholesome.” 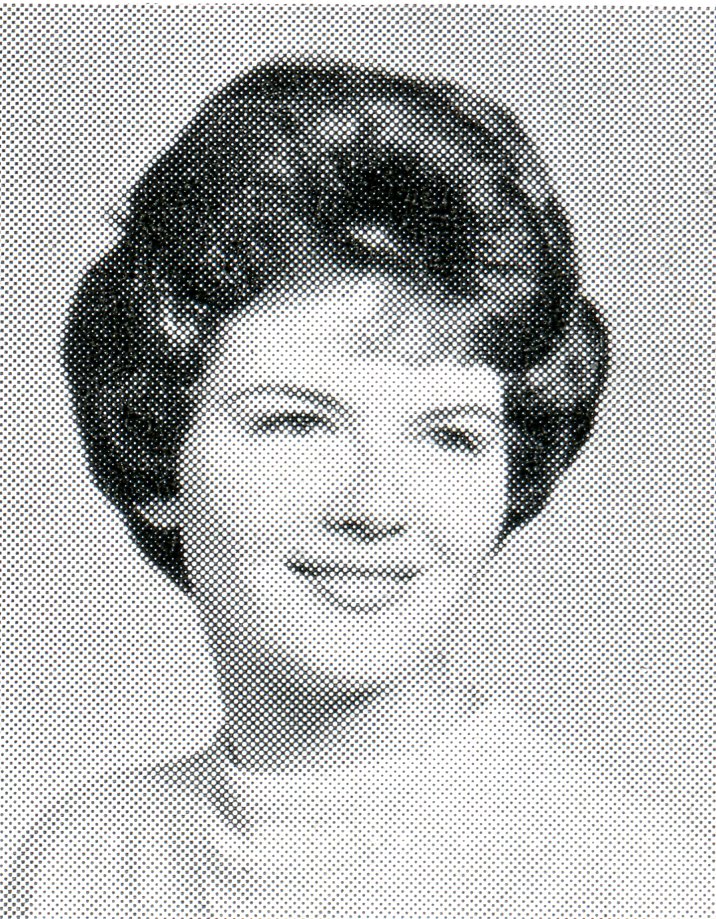 Florence Wisman Mills, a retired community planner with the Federal Highway Administration who lives in Washington, D.C., recalls how strange it was to be suddenly famous. “What really surprised me was when I went home that summer to South Bend (Ind.), people on the street recognized me.”

The team made it to New York after overcoming an unlikely foe: Bullwinkle the Moose. “One of the big problems is finding a TV set on campus for the College Bowlers to watch the competition. There simply aren’t many TVs available,” Professor of Psychology David Hills, the team’s coach, told the Old Gold and Black during practice sessions in February 1963. “The few that are available are tied up with Bullwinkle the Moose, which is telecast at the same time on another network.”

Frank Wood, professor emeritus of clinical and forensic neuropsychology at the Wake Forest School of Medicine, found his GE College Bowl pin recently. He attributed much of the team’s success to Hills and his practice routine. 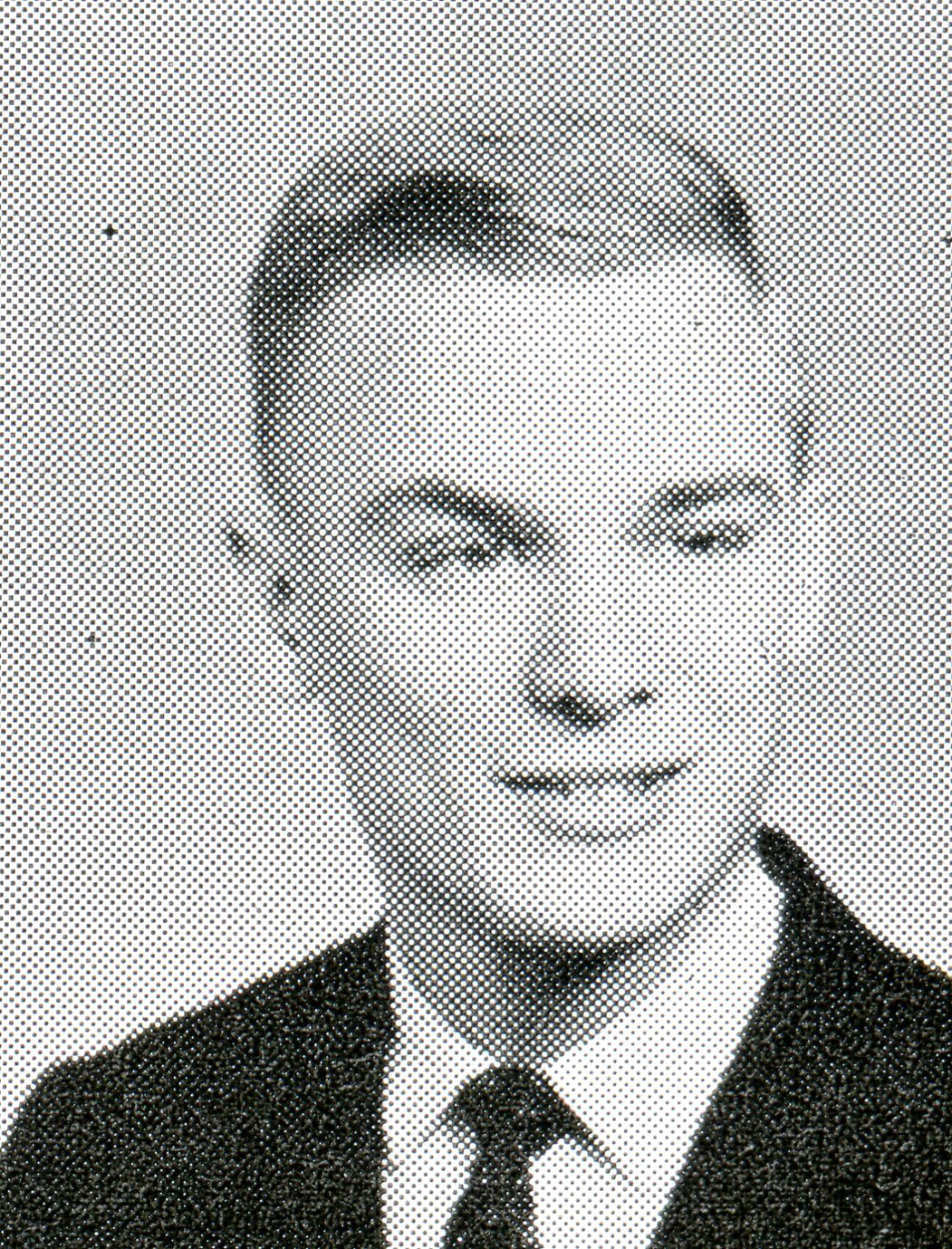 “He rehearsed us repeatedly on the theory that a few fractions of a second make all the difference. One of the things he discovered as we practiced, and then he taught us, is that we will know the answer before we know we know it, so press the button. In the time between when you press the button and the moderator calls on you, the answer will come to you.”

About 60 students tried out for the team by taking written tests and then competing against other students to see who could answer questions quickly. Gilliland, Wood, Shertzer and Wisman were chosen for the first team. Sophomore Charles Myers (’65) and seniors Doug McCorkindale (’63), Bill Wallace (’63) and Judy Wrinkle (’63) were chosen as alternates. 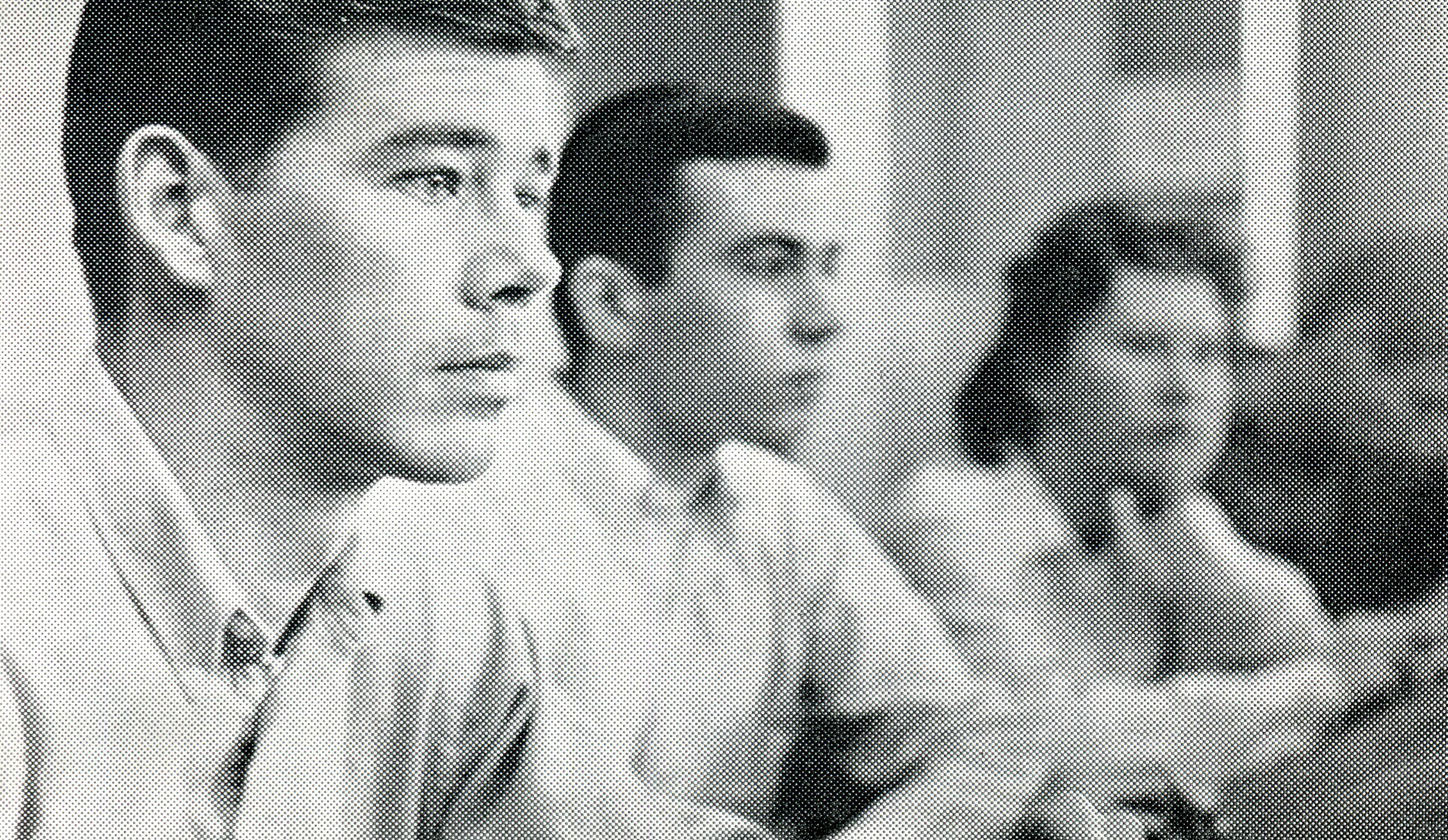 It was Mills’ first time to fly in a commercial plane and her first visit to New York. She recalls going to a Broadway show and the Metropolitan Opera, and ordering strawberries and cream through room service at the Waldorf-Astoria. Diana Gilliland Wright, who grew up in Nigeria where her parents were Southern Baptist missionaries, didn’t have much money for new clothes for the show, so a classmate, Ann Herring (’63), who also happened to be Miss North Carolina, loaned her some clothes.

CBS and sponsors paid for the team’s plane flights back and forth to New York and hotel rooms, but “Wake Forest made sure we had some walking around money,” Wright said, allowing them to eat in fine restaurants and see Broadway shows.

The team came from behind to defeat the University of Kansas City, 275-215, in its first appearance on the show on March 3, 1963. Shertzer still remembers that the studio was painted in odd colors so the show would look nice on the black and white TVs of the era. 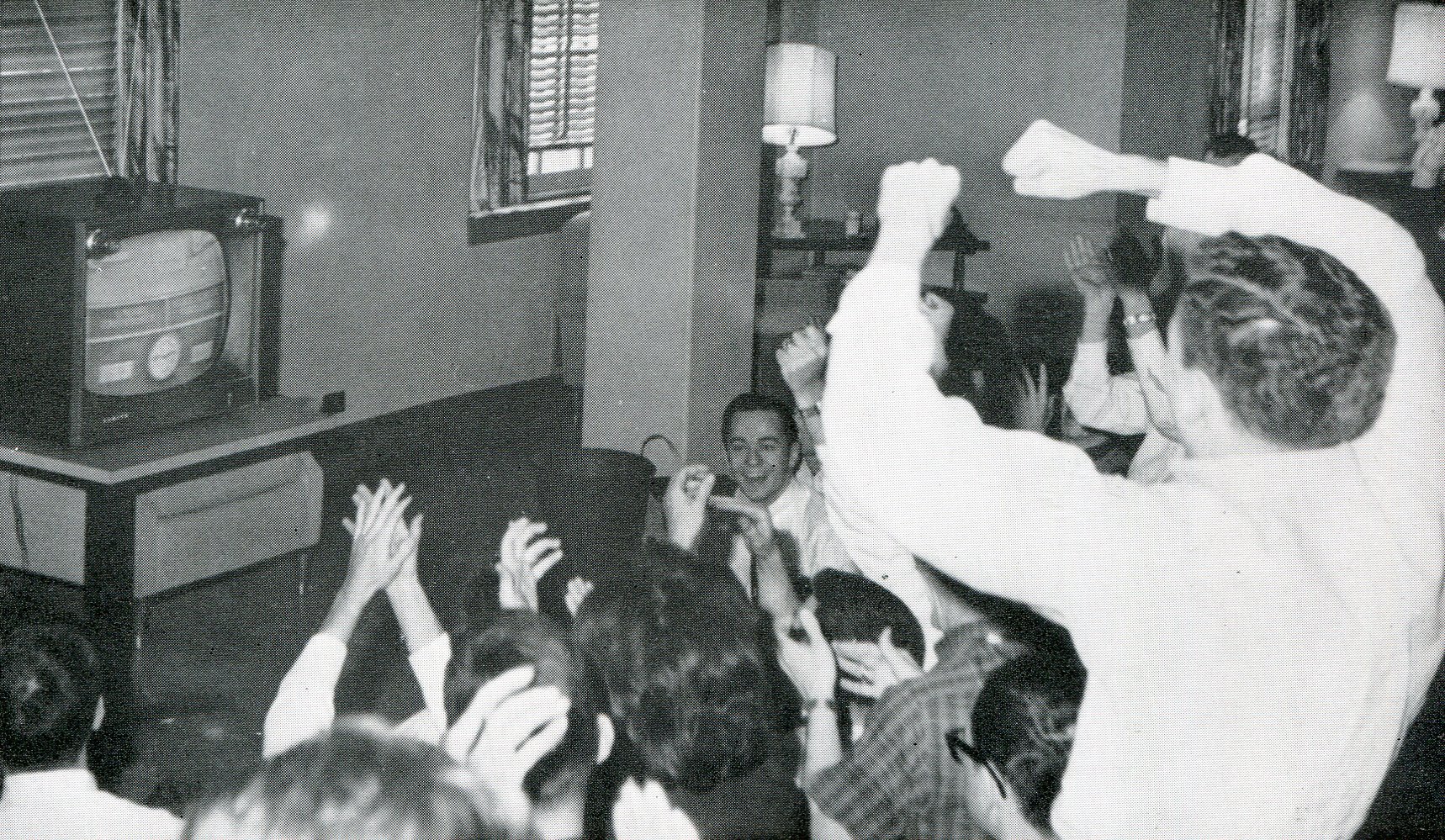 Students watch the College Bowl in a campus lounge.

Martha Swain Wood (’65), who later married Frank Wood, gathered with other students around the television in the basement lounge of Bostwick dormitory to watch the team. “They were heroes,” on campus, she said. “We cheered them on like it was a sports event.” Frank Wood’s family in Miami couldn’t watch the show at their home, but the local CBS station invited his family and friends to the station to watch it.

A week later – bolstered by a good-luck telegram from actors Paul Newman and Joanne Woodward, whom they met at a Broadway play the night before – the team cruised to a 315 – 80 win over an Emory University team coached by alumnus Dan Fagg (’52).

Between trips to New York every Friday, team members tried to resume their lives as normal college students while continuing to practice and answering fan mail. People from around the country praised the team for their good humor, cooperation and sportsmanship. 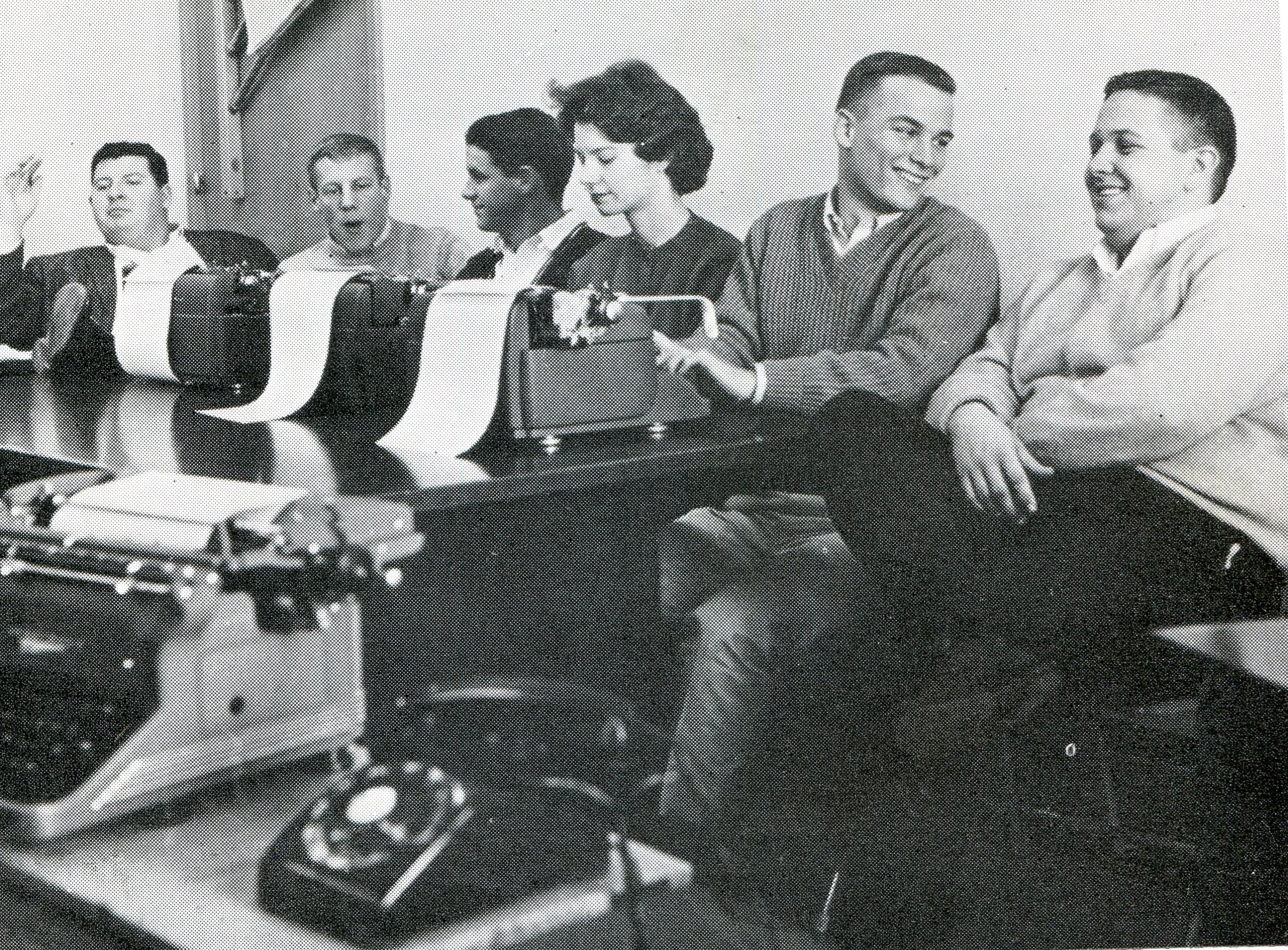 Frank Wood and Diana Gilliland (Wright), second and third from the right, were also columnists for the Old Gold and Black.

But some of the letters were downright strange. A writer from Michigan admonished Wood to “keep his hands off those gals.” A letter from a “Greenwich Village personality, beard and all,” asked Gilliland for a date, the OG&B reported. (She declined.) A Northern college student asked if Southern girls wore shoes. Wright and her friends were so incensed that they threw shoes in a box to send to the letter-writer, but no one wanted to pay for the postage.

But when the show started, the Kenyon team suddenly came to life and won 275 – 245. A CBS cameraman reportedly cried. It was a “miracle,” a Kenyon team member said afterwards; another said he was “shocked” to win. (Read Kenyon’s account of the match.)

Wake Forest’s coach Hills noted that “several unanticipated developments conspired to make the contest even more difficult,” including the fact that Kenyon had a large number of fans in the studio audience. But in the end, it came down to what Hills knew from the start of the team’s practices: speed matters, and Kenyon was just a bit quicker to buzz in to answer several questions.

Fifty years later, Wood still has an image from that final match in his head. “You remember these things in slow motion; seeing your hand go down on the button, but the other guy (on Kenyon’s team) is about 1/16 of an inch further down, and he got the question and they got the lead.”

Along with good will from around the country, the team won $3,500 from General Electric and $200 from Winston-Salem radio station WTOB for scholarships. (Wright remembers receiving a top-of-the-line hair dryer.) N.C. Gov. Terry Sanford, the N.C. Legislature, the Winston-Salem Board of Aldermen, and a third-grade class from Elkin, N.C., sent their congratulations.

The four students competed “with charm, with spirit and with a solid store of knowledge,” noted the Winston-Salem Journal. Gilliland told the OG&B afterward: “I wouldn’t change the experience for anything in the world, and I wouldn’t go through it again either. We showed what we could do and enjoyed it.” 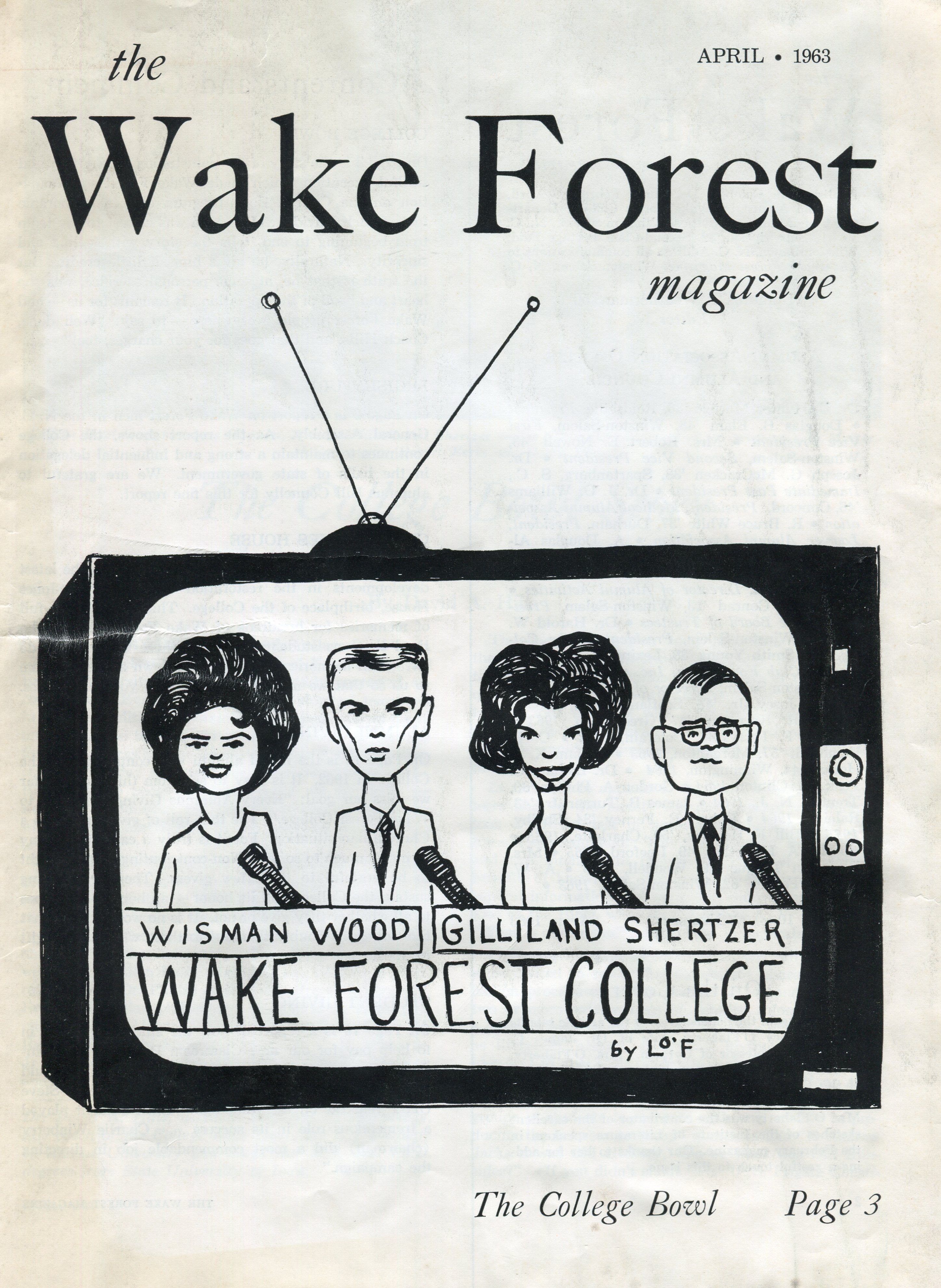 The team was featured on the cover of the April 1963 Wake Forest Magazine in a drawing by Lucy O’Flaherty, wife of Professor of German Jim O’ Flaherty.