Anyone watching the final, suspenseful moments of the 2012 U.S. Open Championship saw that unmistakable bond. Television cameras in the clubhouse focused on Webb (’08) and Dowd (’07) Simpson, who waited as later scores came in to see if Webb’s two-under-par 68 that day would make him the winner. Yet the couple seemed as relaxed as if it were a date night — which was sort of the case. 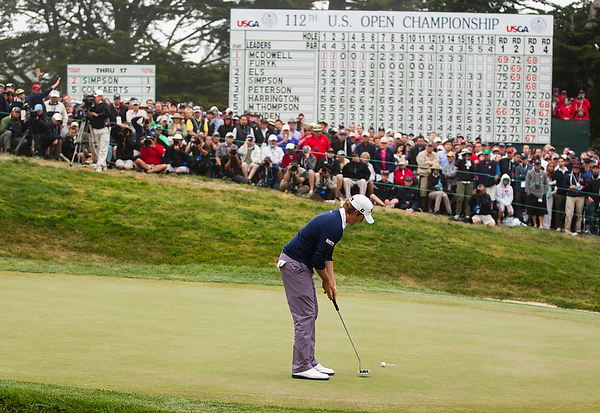 Photo courtesy of the USGA

“The U.S. Open was the last tournament I was allowed to fly to because I was in my third trimester of pregnancy,” says Dowd. “It was just me and Webb, so the tournament was a little ‘babymoon’ before (daughter) Willow arrived. Also, Webb says he always plays better when I’m there.”

They could hear the crowd’s roar on hole 18, just outside where they were sitting, Dowd recalls, but because of the television delay the Simpsons had to wait to see what happened on the screen. “It was so nerve-wracking,” she says. “To stay calm, we watched videos of our son, James, who was just learning how to walk.” Webb got the win, of course, his golf career soaring to a new high that day. His private life had taken off eight years before, when Webb was a freshman at Wake Forest and Dowd a sophomore. 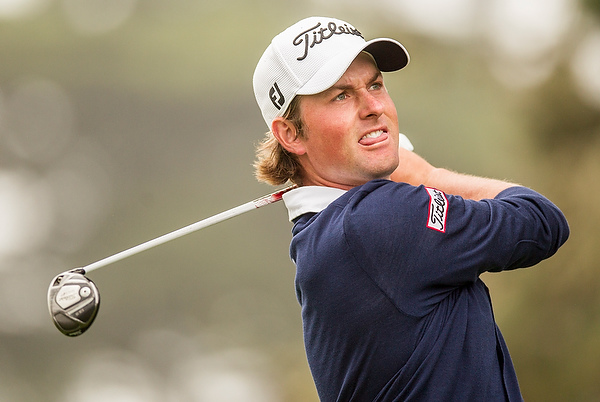 Photo courtesy of the USGA

Even before Webb set foot on campus, Dowd’s best friend, Maggie Simons (’07), heard that her Raleigh buddy — young golfer Webb Simpson — was headed to Wake Forest on a golf scholarship. “Your future husband is coming to Wake,” Simons teased Dowd. The love story unfolds like a screenplay for a Hollywood romantic comedy. “I was at a party in Raleigh for Maggie when Webb’s father, Sam, walked up to me and said, ‘I’ll pay you $100 if you’ll take my son out,’ ” Dowd recalls. The Wake Forest theatre major quipped: “If he’s half as cute as you, I’ll do it for free.” 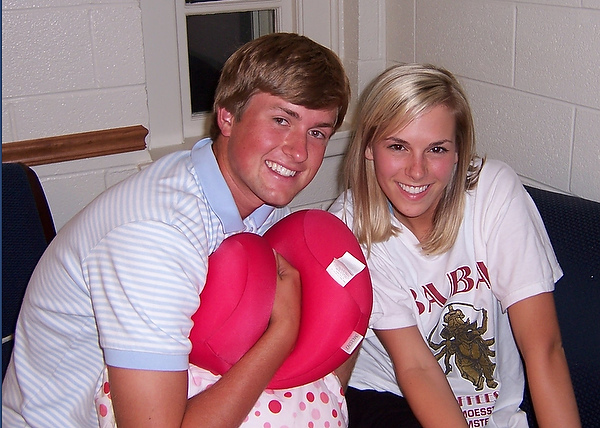 Dowd and Webb never met that night, but a couple of months later Webb thought he had spotted this mystery girl at a party (based on descriptions from his father, he was on the lookout). Sure enough, it was Dowd. Their relationship started out as bantering in the dorm room with friends, then progressed to dating as a full-fledged couple. And yes, says Dowd, Webb’s father paid up the $100. The young couple used it for a steak dinner at Ryan’s, their favorite restaurant.

Finding time to date was challenging. They were both busy with academics and sports. Webb’s schedule included afternoon golf practice; Dowd’s passion for acting meant evening theatre rehearsals or plays. 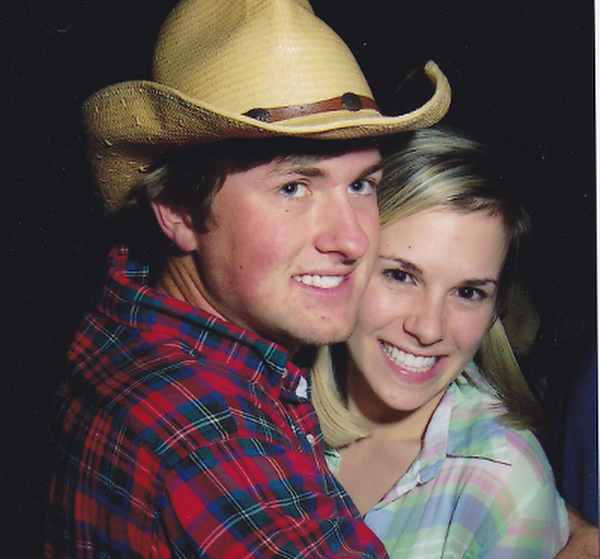 “It was hard for us to carve out time together, but we tried to find time every day,” says Webb. “We hung out more on the weekends, going to Ryan’s and The Loop for dinner, and when we did have more time we would go to the movies. There was one thing we loved to do — we would sneak up to the golf complex at night, order a pizza and watch a movie. It was quiet and away from everyone.” (He adds, “Sorry, Coach Haas.”)

One of Dowd’s favorite memories occurred when she played Juliet her senior year in “Romeo and Juliet.” She recalls Webb always watching her plays from the back row, where she says he could smuggle in Diet Cokes. He brought her flowers afterward. The two also enjoyed functions with her Chi Omega sorority and casual study sessions in Tribble Hall. 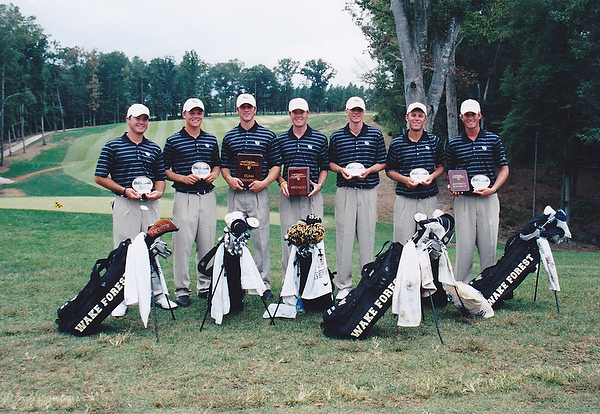 While Webb was already distinguishing himself on the golf course (he was ACC Player of the Year in 2008), his studies in religion appealed to another side of him. “That subject interested me most at the time,” says Webb. “I’m a Christian, so I thought learning about other religions could only help me firm up my beliefs in Jesus.” Webb took numerous classes with Charles Kimball (P ’04), his favorite professor.

After Dowd graduated, the two went separate ways for a year. Webb finished college, while Dowd pursued acting in Atlanta and Los Angeles. When they finally reconnected, it didn’t take them long to re-establish their comfortable rapport from college days. “The first date we had, I thought to myself, ‘I’m falling right back in love with the man I fell in love with my sophomore year,’ ” says Dowd. He was still the same mix of “goofy and gentlemanly,” but older and more mature. “I knew that I had met the man I wanted to grow old with.” The two married in Charlotte — Dowd’s hometown — in 2010, with college friends among the wedding party. James was born the following year, giving them a family focus even as Webb started to travel more for professional golf. Their strong religion is another bond (and part of Webb’s wholesome image in the sports world); Dowd says they study the Bible together on rare evenings at home. 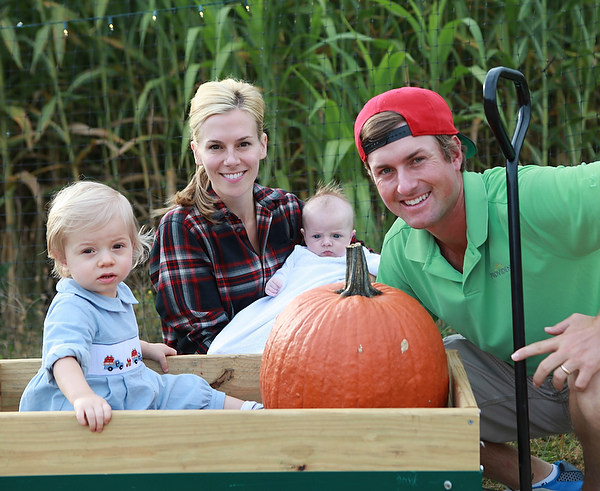 Dowd’s role on the golf circuit is both emotional and practical. “I walk the course and cheer Webb on, of course, loving him unconditionally after every round,” says Dowd. “But I also make PB&Js for him to eat at the turn so he doesn’t get hungry.” Webb discloses a secret skill that Dowd brings to the tournaments. “She’s a professional clapper out on the courses,” he says. “Many greens are elevated and we (players) can’t see the green from the fairway, so Dowd will often let me know how close my ball is to the pin by her clapping.”

Continuing their habits from Wake Forest, they thrive when together but have their own identity, too. “I think what makes us a good team is that there’s a lot of balance,” says Dowd. “We’re very similar yet just enough different to make it interesting.”

Wake Forest men’s golf Coach Jerry Haas (’85) recalls playing a head-to-head match with Webb Simpson (’08) during the young golfer’s junior year. “Webb was down five with seven holes to go, and as his coach I was sort of rubbing it in, saying I couldn’t recall beating anyone this badly,” he says. The good-natured teasing just made Webb that much more determined, Haas adds. “When he’s not winning, he gets very quiet.” Webb proceeded to convert that silent focus into birdies for five of the next seven holes, forcing the match into a playoff that resulted in a win for Simpson.

By Webb’s senior year, Haas felt even more certain his young player was destined for professional golf. “I told his father, Sam, that Webb’s going to make it,” says Haas. “I could just tell — his swing had evolved and he was hitting beautiful shots. Webb just had that look; he was carrying himself like someone who was going to be successful.”

Webb arrived at Wake Forest on an Arnold Palmer scholarship in 2004 after playing golf in high school in Raleigh. While representing the Deacons, he was named All-American player three times and was asked to play in the 2007 Walker Cup. When he went pro in 2008, Webb had two runner-up finishes while on the Nationwide Tour, then qualified for the PGA Tour in 2009. It was in 2011 that Webb won his first PGA Tour title, The Wyndham Championship (in nearby Greensboro), followed by the Deutsche Bank Championship. The victory at the 2012 U.S. Open Championship in San Francisco was even sweeter because it brought a win for Demon Deacons golf after Arnold Palmer lost the U.S. Open at the same golf course decades before.

A common denominator is good character, says Haas. “They all carry themselves like gentlemen,” he says. “They are a credit to their sport and great ambassadors for Wake Forest.”