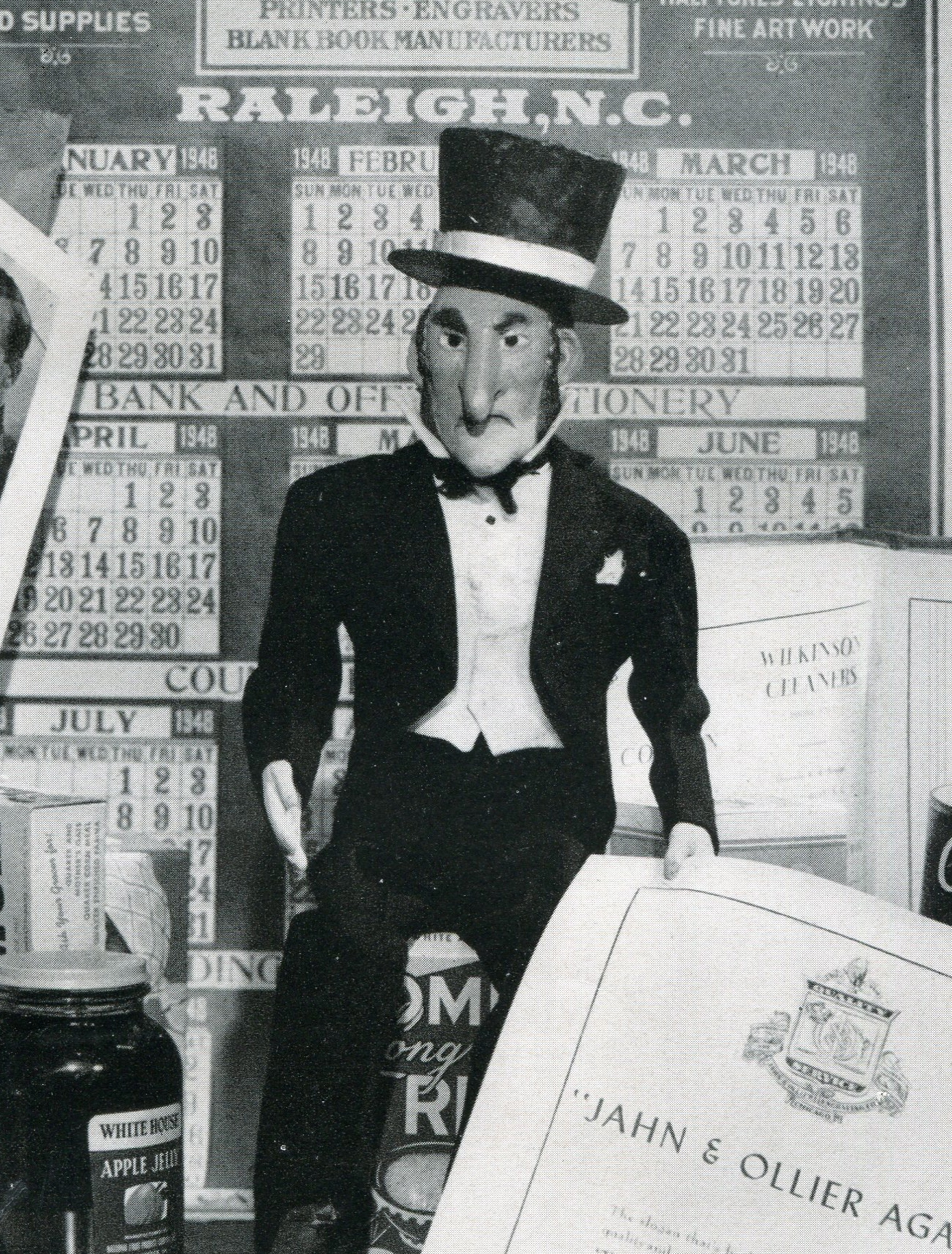 The Demon Deacon was a mascot still in search of an identity when he was featured in the 1948 Howler.

In one of the earliest known depictions of the Deacon, the Deacon is portrayed as a stern Baptist preacher, strikingly similar to today’s Deacon, with a huge nose, protruding chin, long sideburns and balding head, and dressed in a black suit and top hat.

He may look stern, but the “little guy” is the “most renowned personality” on campus, the very spirit of Wake Forest, according to the Howler. “He is the living spirit of Wake Forest College that has enabled it to serve effectively for one hundred and fourteen years in accordance with its motto — Pro Humanitate.” 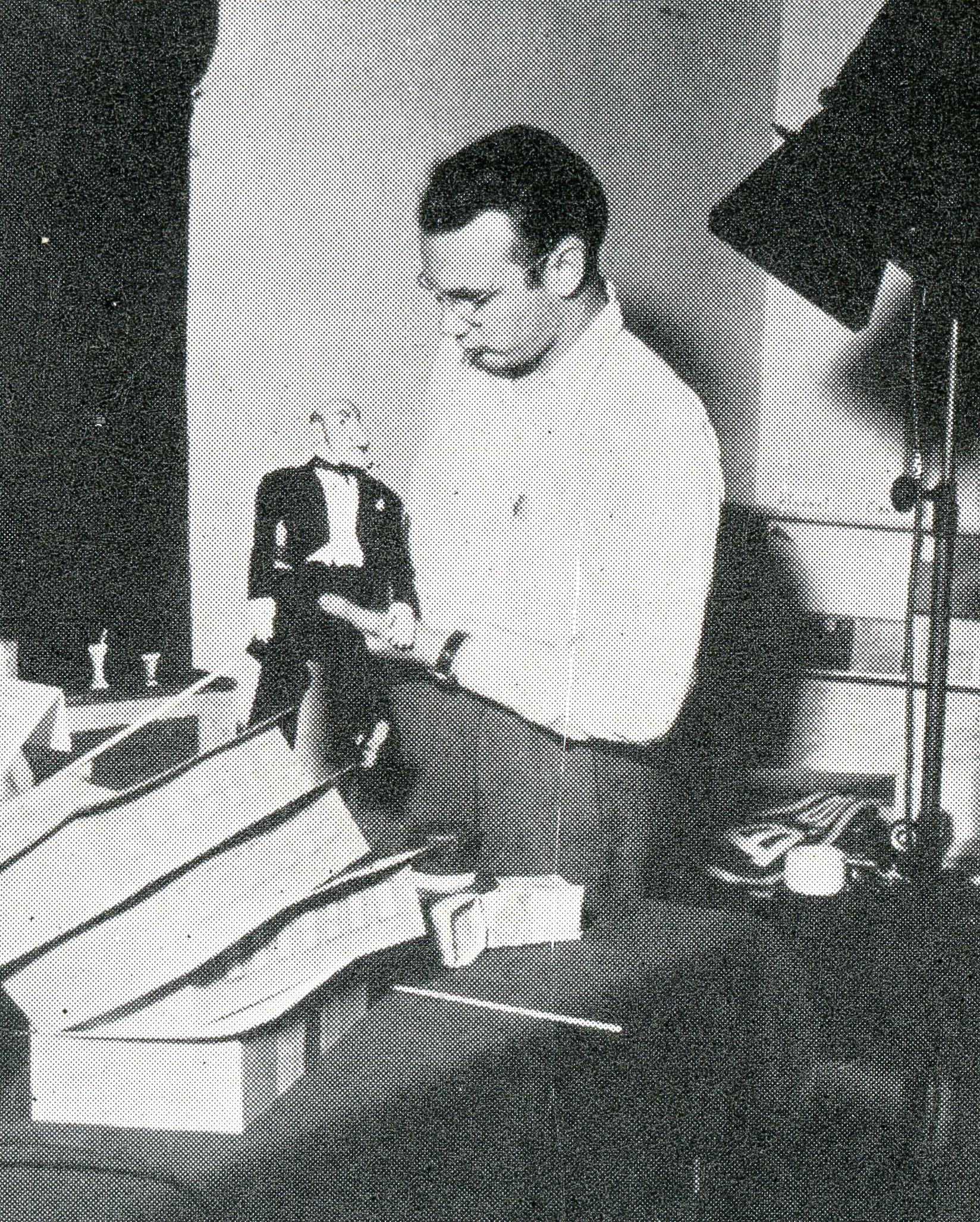 The 1948 Howler features the Deacon in 11 different settings that introduce each section of the yearbook, from class photographs to the “Beauty Court” to advertisements. The Deacon was the “masterpiece” of art editor Glenn Willis (’49).

A studious-looking Deacon, propped up against trigonometry and freshman English textbooks, opens the Administration and Faculty section. A somber Deacon wearing a dunce cap opens the Classes section. A debonair Deacon, sans top hat, swings his “date” around the dance floor to open the Fraternities section. The law school Deacon survives late nights’ studying with lots of coffee and cigarettes.

You may have never seen the Deacon, the Howler wrote, but he’s a part of every student and professor on campus: “He has been with you from the day you entered Wake Forest as a bewildered freshman. He’s the little guy who made you feel at home among the magnolias scattered over the beautiful campus; he introduced you to professors whom you learned to love and classmates through whom you gained a new sense of brotherhood. 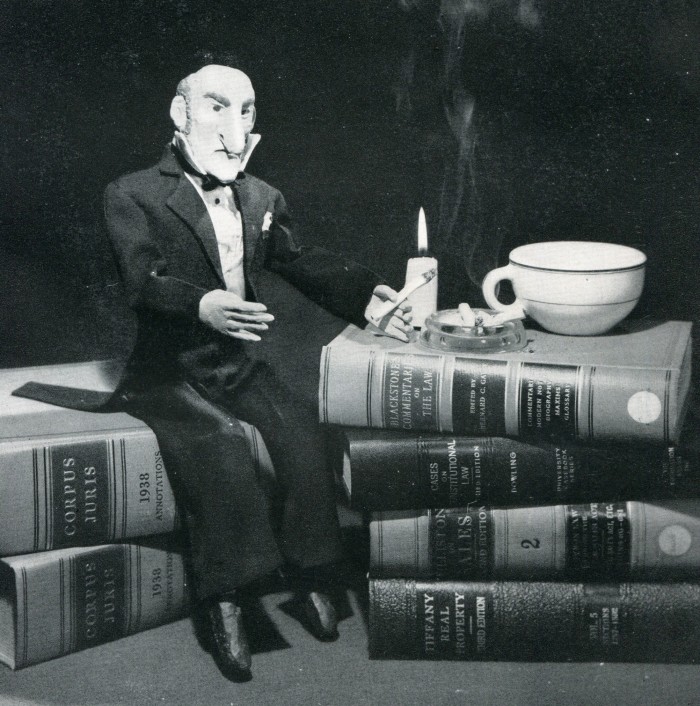 Law school in the 1940s required late nights’ studying and lots of coffee and cigarettes.

“He revealed to you all the sacred traditions that the college cherishes; he took special care to cultivate in you a spirit of friendliness … . Almost unconsciously, you found yourselves learning each other’s name and greeting one another with a cheery ‘Hi’ as you strolled along the winding campus paths.

The Demon Deacon was still evolving in 1948. Wake Forest’s athletic teams were briefly known as the Tigers in the late 1800s and then the Baptists and the Old Gold and Black. In 1923, the Old Gold and Black began referring to the football team as the “Demon Deacons” and “(Coach Hank) Garrity’s Deacons,” as well as the “Carolina Baptists” and the “Baptist eleven.” From there, the Demon Deacon name caught on, but there wasn’t a mascot for another 20 years. 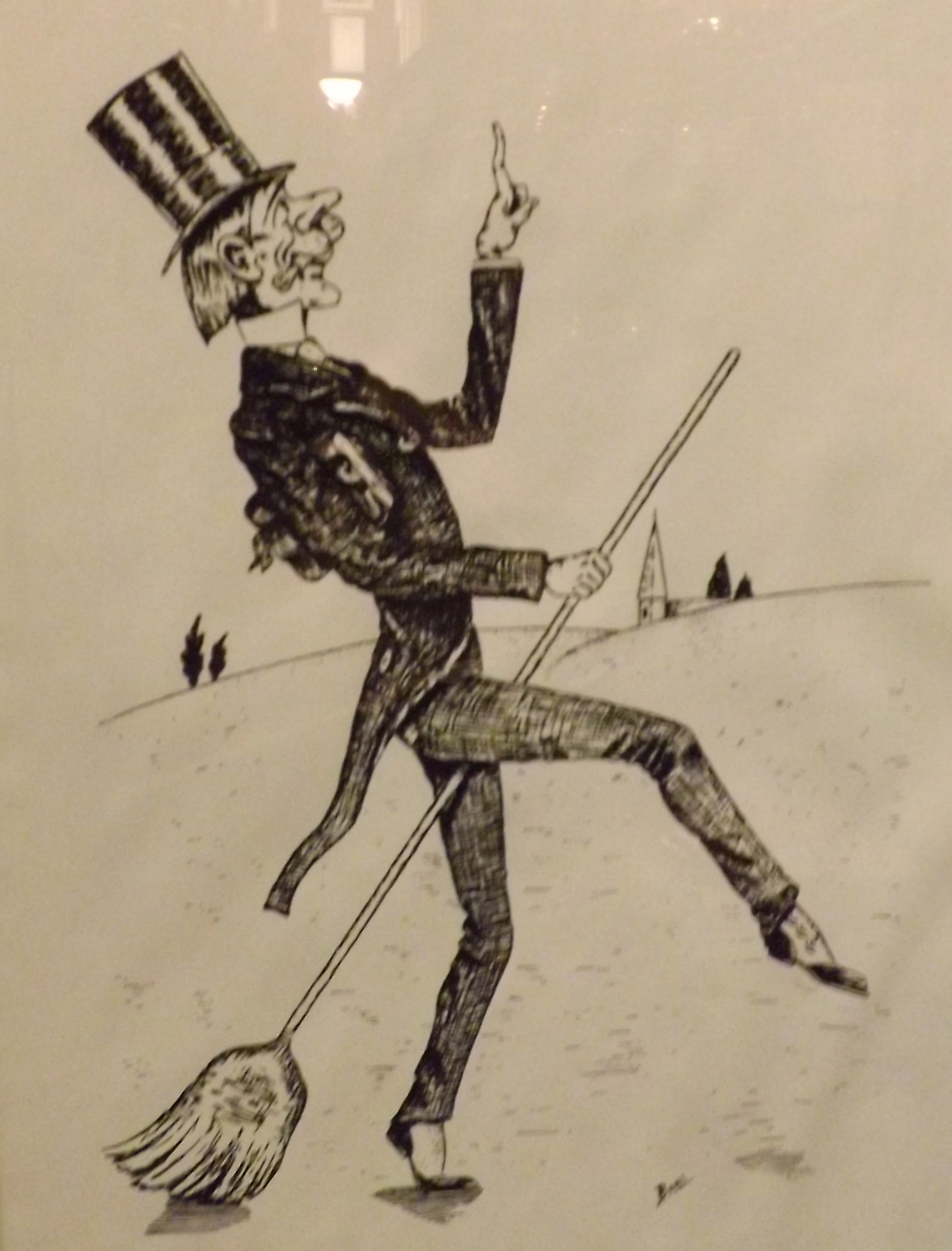 The Baptist mascot, when Wake Forest’s athletic teams were known as the Baptists, circa 1913, courtesy Wake Forest Historical Museum.

In the 1930s, J. Allie Hayes (JD ’35) donned tails and a top hat and pretended to direct the marching band. But it wasn’t until the early 1940s that the nickname finally led to a mascot.

On a dare from his Kappa Sigma fraternity brothers, Jack Baldwin (’43, P ’70), dressed up in an old tuxedo and top hat — borrowed from a local woman whose husband had just died — for a football game in 1940, and a tradition was born. (Baldwin’s top hat and tails are on display at the Wake Forest Historical Museum.)

A few years later, the Deacon had a starring role in the 1948 Howler, edited by Campbell McMillan (’48, MD ’52) and dedicated to Latin professor Hubert McNeill Poteat (1906, MA 1908, P ’36, ’40). Get to know the Deacon, the Howler advises students: “All the faces of the Deacon’s personality will become evident to you as you look through this book. 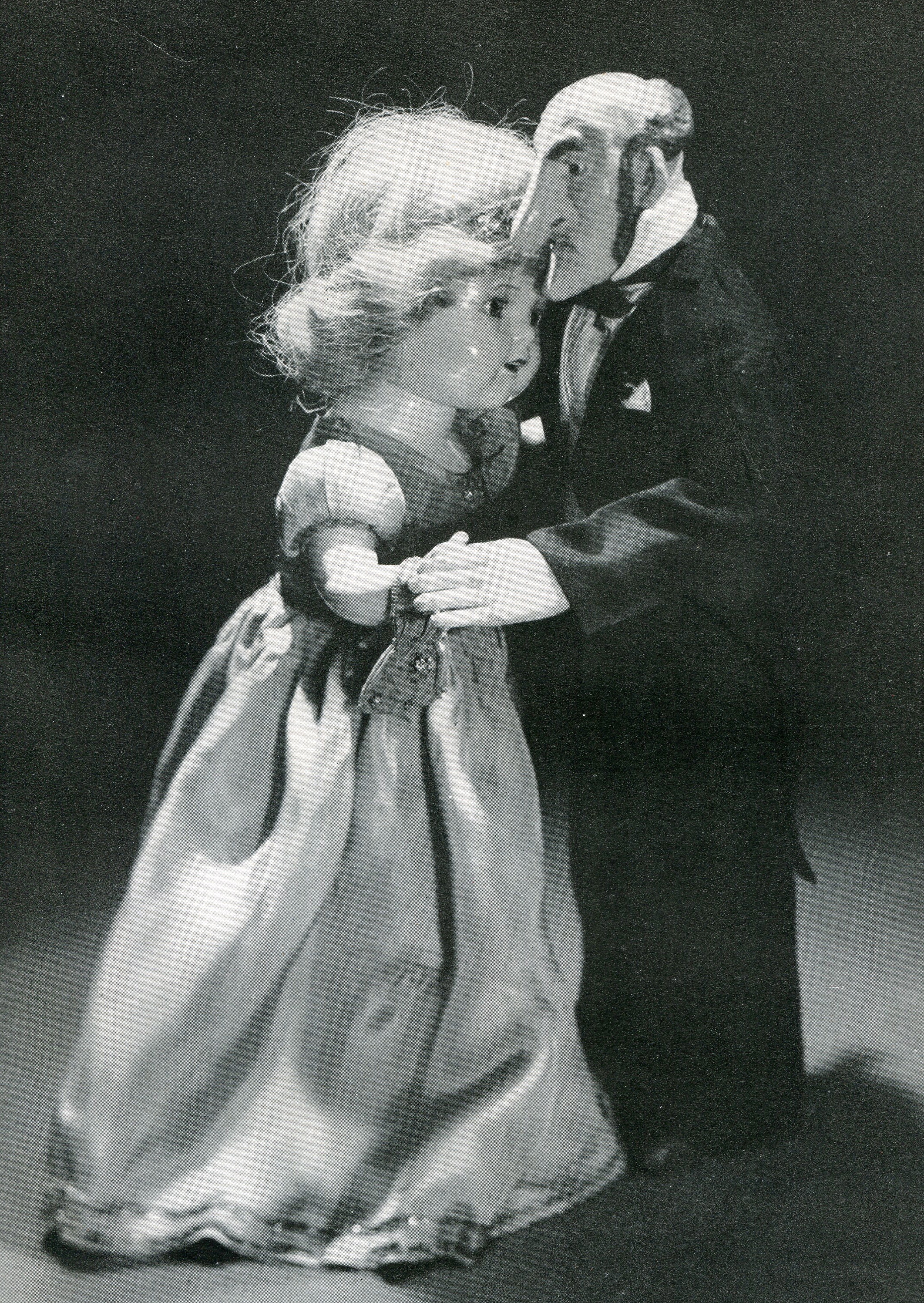 The Deacon and his “date” introduce the social fraternities section.

“You will find yourselves reliving with him the big events of the year — yelling your lungs out as you watch his protégés trample the formidable University of North Carolina Tar Heels once on the gridiron and again on the basketball court, attending the Pan-Hellenic dances during the year, registering with the largest group ever to crowd into the college, sledding on the golf course during one of the biggest snows in Wake Forest’s history … (and) enjoying himself in the various aspects of campus life.”