While working for the World Bank in Washington, D.C., Ellen Page (’10) sometimes found herself walking home late at night. She had completed a Rape Aggression Defense (RAD) class at Wake Forest but to feel even more secure she would call her father, Jonathan, while she walked; they would chat until she reached her front door.

One day Page and her father, who was more than 800 miles away in Memphis, Tenn., acknowledged their “security system” wouldn’t be particularly efficient in an actual emergency. Her Dad’s 911 call would go to his city, not hers, and he would not likely know her location.

So the innovative and entrepreneurial duo began searching for a product that might meet their need. When they didn’t find it, they created one: Coyote Case, a smartphone case with a built-in GPS locator and 110-decibel panic alarm, so named because coyotes howl to protect their offspring.

The case has an accessible, arched on/off switch so it can’t be activated accidentally. When the switch is “on,” the intuitively designed case is activated by a squeeze, either by hand or — if it’s in a purse or pocket — by a body’s natural physical reaction to dangerous circumstances. At a time when rapid response is essential — and thinking perhaps not so clear — no password or number sequence is required.

Coyote Case currently is designed to fit iPhone 4, 4S and 5, with Droid and Galaxy versions in development. The company is accepting pre-orders on its website. Cases are produced in the USA and come in six designer colors. Customization will be available for companies purchasing large quantities.

“This wasn’t the background my dad and I came from,” said Page, who is transitioning from her job as special research associate to the Vice President of the Middle East and North Africa Region at the World Bank to succeed her father as president of Coyote Case in Memphis.

“Neither of us had ever done a product design before. But we’ve learned there’s a great demand for this; it’s a great product to make you feel safer. Memphis has a history of success stories and I want us to be the next one in that tradition.” The story is unfolding: Coyote Case has already gotten important recognition in the technology world, winning the Innovation Award at the annual Consumer Electronics Show and $25,000 at Everywhereelse.co: The Startup Conference in Memphis. Page, who traveled internationally during her job with the World Bank, said Coyote Case is a practical tool at home and abroad (follow @CoyoteCase on Twitter and Facebook.) 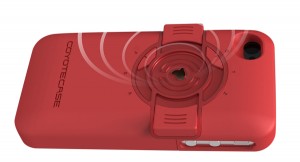 Coyote Case has a GPS locator plus an alarm.

A Carswell Scholar who studied English and economics, she picked Wake Forest because of its strong entrepreneurship program. She minored in entrepreneurship and social enterprise, conducting an independent study and won a business plan competition sponsored by the Ewing Marion Kauffman Foundation for a student-run childcare, dog-walking and housesitting service. Page, who was president of Omicron Delta Kappa while at Wake, worked as director of product development at a Raleigh, N.C.-based technology startup immediately after graduation.

When she reflects on her college years Page cites three mentors who encouraged her to explore and take risks. Vice President for Student Life Ken Zick’s passion for his students had a profound impact on her experience, and Ben King, professor of practice in the business schools, was a creative thinker who helped her understand how entrepreneurship works.

“Tom Phillips was a mentor and advisor who encouraged me not to do the conventional when I graduated,” she said. “He challenged me to think beyond the most obvious set of possibilities for my future.”