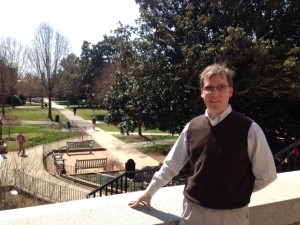 As chief scientist of the U.S. Government Accountability Office (GAO) — the non-partisan investigative arm of Congress — Tim Persons (MS ’00, PhD ’01) advises members of Congress on cutting-edge science and technology issues, from climate engineering and biosecurity to advanced weapons systems and homeland security systems. He received a master’s in computer science in 2000 and a Ph.D. in biomedical engineering in 2001. He and his wife and two children live in Maryland.

What does being chief scientist of the GAO entail?

I‘m expected to be an expert consultant to help Congress understand science and technology issues and their implications in a nonpartisan, yet accessible manner. Every thing GAO does is to help make the United States better, particularly in how we seek to increase accountability in the federal government.

In one sense, the GAO is analogous to Wake Forest and its Pro Humanitate motto – special and small, yet critically important. There are no political appointments at GAO, and we are led by the Comptroller General of the United States, a non-partisan leader with a 15-year term of service. The “A” in GAO, which stands for accountability, is critical to who we are. Thus we cannot and will not be politicized. We have to have a sense of consistency, a non-partisan, fact-based, non-ideological viewpoint to gracefully speak truth to the leaders of our nation.

I understand that part of your job is testifying before Congress and congressional committees? 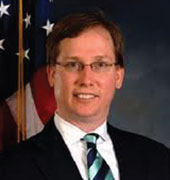 I testified last year on an undercover investigation GAO did on the issue of counterfeit electronic parts in the supply chain of the Department of Defense. Our investigators created bogus companies to purchase middle- and after-market electronic parts via internet platforms and, once they acquired them, used advanced laboratory methods to determine whether or not they were authentic or what the community calls ‘suspect counterfeit parts’.

Can you tell us what you discovered?

Our report found that it was relatively straightforward to acquire these often rare or hard-to-find parts in this manner and that all of them were indeed shown to be ‘suspect counterfeit’ using electron microscopy and other advanced methods. Moreover, these parts were relatively simple components, but were in the parts list of weapons systems ranging from nuclear powered submarines to advanced fighter jets, which have total lifetimes of several decades. That study helped the Congress and the defense community understand the risk to the safety and security of the weapons systems upon which, to a large extent, our national security is based.

What are some of the major issues that you’re dealing with now?

Nanomanufacturing. Although the United States is the undisputed leader in basic research and development and is deemed a world leader in innovation, there seems to be a growing consensus that manufacturing is a critical part of our economy and that there is a nexus between it and the innovation process. Thus, we’re doing a strategic study on the position of the United States with respect to current and next generation manufacturing’s ability to leverage and capitalize on the significant national investments we’ve put into nanotechnology, especially as it pertains to increasing the number and quality of jobs and increased GDP and greater economic security.

Can you give some examples?

Examples in health care would include nano-size biomarkers to identify tumors and drug delivery systems to treat cancer that don’t diminish immune systems and have high specificity to the disease. In the automotive sector, an example would be nano-enabled lithium batteries with higher energy density for higher performing hybrid or electric drivetrains. In the construction sector, nanomaterials science is shaping the next generation of concrete and holds the promise of building bridges that could last a century or more. The semiconducting industry has been doing “nano” for some time, and it continues to follow Moore’s law as they move from current generation devices at 22 nanometer down to 7 nanometer lithographic technologies.

What are some of the other major issues you’re studying?

We’re doing a technology assessment for Congress on the issue of freshwater conservation technologies in the energy sector. The entire energy supply chain utilizes and is integrally tied to freshwater — from the “well to the wall socket” — so the key focus of the study is to look into technologies that help minimize the use of this critical natural resource, especially for parts of the country, such as the desert Southwest and drought-stricken areas, that don’t have an abundance of freshwater.

And in homeland security?

We’re also doing a study related to the proper development of homeland security technologies, one involving the deployment of large format radiation detectors at our borders and another on whole body imaging technologies used for passenger screening at airports. The major focus of this work is the extent to which these millimeter wave scanners have been developed and designed to continue increasing the security of the global air transportation system (see the Christmas Day 2009 airplane bombing attempt by Umar Farouk Abdulmutallab).

TSA faces a daunting challenge to secure 100 percent of all flights, yet with a public that often desires no impact to their person or privacy nor their time to get from flight check-in to the gate. The new generation of technologies they are using involve automated (that is, computer only) identification of potential threats on a given passenger, which holds the potential for both speeding up the screening process while increasing security, or alternatively slowing the process down if there are too many false alarms.

Does the GAO advocate certain positions?

Not in the sense of political advocacy or interest groups. We do, of course, advocate at all times for greater accountability in the federal government. This often comes in the form of nonideological, nonpartisan and fact-based recommendations for executive action or matters for congressional consideration. In our technology assessment portfolio, which I co-lead with GAO’s chief technologist, we seek to understand the key impact a technology may have on society, the environment and the economy, and what ethical, legal and social implications might be involved.

Consider hydraulic fracturing or “fracking” technology. The United States is becoming more energy independent and is expected to become the largest energy exporter in the world in a very short time due to this technology, but there are concerns regarding the technology’s risks to the environment and its impact on freshwater usage. No technology is ever a ‘silver bullet.’ That is, it’s never as simple as just ‘use this and such technology and everything is solved and there are no problems.’ The key question with these technology assessments is “are we managing and considering both benefits and risks in a holistic manner?”

What professors at Wake Forest influenced you?

The GAO and Wake Forest

In some ways, it can feel as if I never left the university setting since every study I lead for the Congress could be equivalent to a master’s-level thesis or Ph.D. dissertation. In that sense, I’m just doing what Wake helped train me to do. Professor of Computer Science Pete Santago encouraged me to pursue a master’s in computer science along with the Ph.D. in biomedical engineering. From the Reynolda Campus: (Reynolds Professor) Bob Plemmons (’61), you can’t get any better than Bob; Keith Bonin and the physics department adopted me to allow me to teach physics lab; (computer science professors) Todd Torgersen, Jennifer Burg and Stan Thomas were inspirations. From the Bowman Gray Campus: Dr. Dan Bourland, a world-class medical physicist; Dr. Fred Kremkau, one of the nation’s top ultrasound experts; Dr. Don Gage, who inspired me to consider a career in public service; and Dr. Bill Chimiak, who was so talented that I recruited him away from Wake to also work for the federal government.