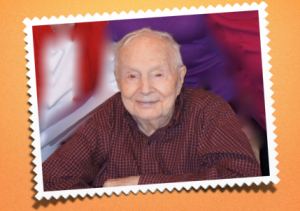 Herman Preseren once set a goal to live to be 90 years old. “It’s wishful thinking, actually, because you never know what will happen,” the retired education professor said when he was still a young 88.

He blew by his 90 birthday easily and observed another milestone April 25 when he turned 100. To put that into perspective, Winston-Salem is also celebrating its 100 birthday; Winston and Salem joined together to form one city in 1913.

Provost Emeritus Edwin G. Wilson (’43), Professor of Education Joe Milner (P ’90, ’93), family and friends celebrated with champagne and cake with Preseren at his home on Faculty Drive, where he’s lived since 1959. A fellow retired military officer and friend used a Civil War sword for a ceremonial cutting of Preseren’s birthday cake. 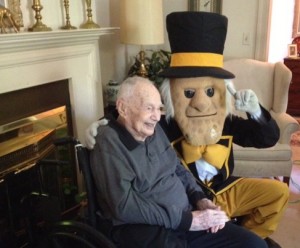 Preseren threw up his hands in surprise and smiled broadly when a surprise guest showed up – the Demon Deacon. The Deacon pointed to Preseren, clapped, and spelled out 1-0-0 with his white-gloved hands.

Preseren’s family — he has two daughters, Nancy Fankhauser and Sandra Alley, three grandchildren and three great grandchildren — had encouraged friends and former students to send him birthday cards, hoping to receive 100 cards. He surpassed that mark and even received a letter from President Nathan O. Hatch expressing his best wishes. 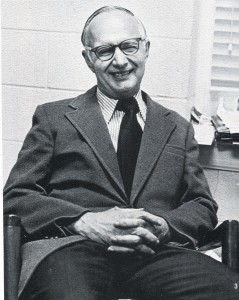 Preseren joined the faculty in 1953 on the Old Campus and retired in 1983. In addition to teaching education courses, he was also chair of the education department from 1975 to 1979, director of the Educational Media Center, and for years the “motion picture photographer’ at athletic events. Preseren and his late wife, Ione, took students to Europe for more than 20 years.

“When I’ve asked him what he loved most about teaching at Wake Forest, he’s always said the students,” said Fankhauser. “His students meant the world to him.”

Vada Anderson (’60) of Winston-Salem took classes with Preseren and was among the well-wishers at his birthday party. She remembers Preseren teaching “life lessons” and practical skills important at the time, like how to thread a film projector. “He had a lot of enthusiasm for education,” she said. 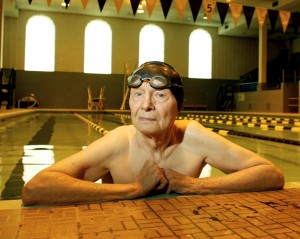 Herman Preseren in the Reynolds Gym pool in 2001. (Photo by Ken Bennett)

Up until his 90s, Preseren was a familiar sight in the pool in Reynolds Gym, swimming a mile almost every day. He competed in several Senior Games at the state and national level and won numerous medals and ribbons, including three gold and two silver medals at the 2000 state Senior Games. He continued to swim competitively until he was 91.

A native of Pennsylvania, Preseren earned his Ph.D. from the University of North Carolina at Chapel Hill. He was a Lt. Colonel in the Army Air Corps during World War II and later served in the Air Force Reserve. For years, he wrote and edited a newsletter for the Reserve Officers Association.