At the mention of Commencement, Abbe Brooks’ (’13) eyes became misty — a prelude to the tears one fights back at the prospect of leaving behind someone, or some place, so dear.

“I’m scared to think of what it’s going to feel like,” she said. “I don’t know where the last four years have gone.”

I met Abbe, a health and exercise science major from Greenville, N.C., who graduates May 20, after her father, Brad Brooks, wrote Wake Forest Magazine. He shared an intriguing story about the parallel paths of his daughter and her late grandfather, Robert E. Brooks (’48).

According to Abbe Wake Forest had always been a big deal in her family; her uncle, William Richardson (’75), and cousin, Elizabeth Richardson (’03), were alums. A sports fanatic like her grandfather, she played high school basketball and volleyball and dreamed of competing at the Division 1 level and a career in the WNBA. She envisioned herself at one of the larger state schools; Wake Forest wasn’t a prominent blip on her radar.

But things changed. “I realized I wasn’t good enough to play at that level,” she said, “but I knew I always wanted to be involved with sports and with a team.” She recalled how her grandfather had often talked about the close community of the Old Campus. Before he died in April 2009 — about the time Abbe had to make her college commitment — he vowed Wake Forest would lead her in the right direction and prepare her for anything. 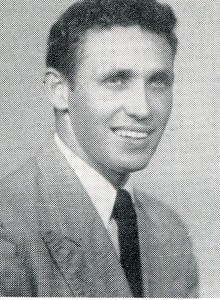 She followed his path and became a Deacon, the sole student from her high school graduating class to enroll at Wake Forest. As her grandfather had on the Old Campus, she found a supportive community and a “family away from home” in the athletic department.

He had played baseball and basketball and was manager-trainer for Coach Douglas Clyde “Peahead” Walker. As a freshman, she applied for and got the job as assistant manager of the Wake women’s basketball team. She was promoted to manager her sophomore year and held the job throughout her college career.

Thanks to Roxann Moody (’82), head equipment manager, and Craig Zakrzewski (’00), assistant director of equipment room services, “It ended up being the greatest experience for me,” she said. “I had always been timid and shy, and they put me in a position where I was forced to be a leader and be assertive. They expected a lot from me, and I had to deliver.”

Abbe’s grandfather was the first Wake Forest student to graduate with a degree in physical education, earning a masters at East Carolina. He loved college basketball, she said, and knew more about players and recruits than most fans. But he settled down, started a family and devoted his career to coaching high school basketball and football in Elizabeth City, N.C.

She plans to get a graduate degree and stay involved with a college athletic program — the very thing her grandfather gave up some 60 years ago — with a career in nutrition and sports management.

In her final days as an undergraduate, Abbe reflected on the love for Wake Forest she and her grandfather will always share — what her Dad describes as ‘the ultimate parallel.’

“I don’t think words could explain how proud my grandfather would be of me,” Abbe said, her eyes getting misty again. “He had this awful needlepoint pillow that said ‘Hard to be Humble When You’re a Demon Deacon.’ I think he’d be saying ‘I told you so, I knew you’d love it.’ ” She added, “I’m nowhere near the 4-foot child hiding behind my mom anymore.”

Words that bespoke a grandfather’s wisdom — and offered insight into where the last four years had gone.