For Commencement 2013, as Ed and I sat waiting for the names of new graduates to be read to the shouts from their families, I smiled remembering Miss Eudora Welty.

In 1984, when Miss Welty came to Wake Forest University to receive an honorary degree, she declined a suggestion that afterwards she might like to leave the stage while the ceremony went on for another hour or so.  In her life she had already sat through 30 such ceremonies at other schools, and one would have thought that she might like to say ”thank you” and travel back home to Jackson, Miss. No, she had confessed.  She wanted to stay because she loved hearing all the names as they were called out, savoring the sound of each one.

And so as the names of this year’s graduates were read, I followed along in the program to see where they were from, as Miss Welty had done.  (In one of my favorite books– her autobiographical essays, “One Writer’s Beginnings” — she described how she had learned to listen at home, enjoying the sounds of clocks striking and of her parents’ talking softly after the children had been put to bed.) I was grateful that she had taught me to enjoy more intensely a familiar ceremony.

The names rolled over Hearn Plaza like a chorus (I won’t say “like thunder” because rain clouds had been threatening all morning, but held off to the end.) 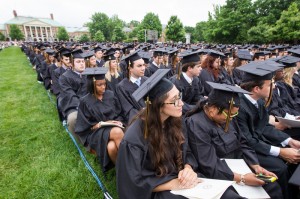 I think also of a line from “The Song of Wandering Aengus,” a Yeats poem I love to hear Ed read:  “And someone called me by my name.” So many glimmering girls and boys, fading through the brightening air.

It is one of the deepest pleasures of our lives that we still walk over to the campus that so reminds us of all of you.  Now these names join yours in the great hymn to Wake Forest, “Thine is a noble name.”