I live in a rural town in Vermont where you can wear yoga pants out to dinner, and if you sport heels and makeup anywhere people raise an eyebrow. I can classify most of my post-college friends into Bohemian writers, activists or hobby farmers. Little do they know I’m keeping a dark secret: that I was once in a sorority, that I used to spend my Saturday nights in a tube top, teetering out of Babcock in too-high heels, dancing to pop songs in a seedy basement, showing up to class a little too proud in my sorority jersey. 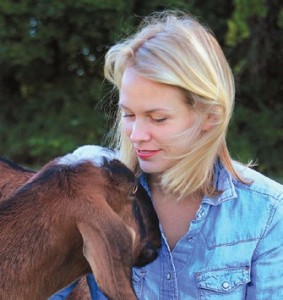 I can picture Pledge Night now, surrounded by a hundred screaming women in red singing songs I didn’t yet know, lapping the Quad, being ushered in to take group pictures. Two older girls started calling me Sparky; I still don’t know why. I marveled at the elegant Eastern North Carolina accents, the occasional Boston or Midwestern voice tossed in. I was utterly impressed and intimidated by the chaos. I recall exchanging bewildered looks with two other pledges who were hanging back from the fray, as if to say: What are we doing here? Did we make a mistake?

That’s also the first night I saw Emily McQueen (’99), dashing out of the shadows with a mischievous grin to do The Worm, undulating across the floor on her stomach while girls — some raucous in T-shirts, some perfect in pearl earrings — cheered her on. What a character, I thought, cutting up like that in front of all these belles and debutantes. Only later would I find out that Emily was a debutante herself.

I was never close with Emily in school; she was older, and I had a freshman’s healthy fear of cool upperclassmen. But I was fascinated, and two years ago this fascination led to a Facebook friendship. We realized we had common ground; we both had young kids and were interested in marriage equality.

Shortly after we reconnected, Emily was diagnosed with multiple sclerosis. We started working on an essay project together. I’m a writer, and Emily had a story that I thought the world would benefit from hearing. Here was a girl with all the hallmarks of traditional Southern womanhood, who chose a nontraditional life with her partner, Kara Borden (’99), and made it beautiful. 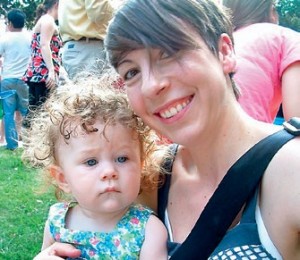 The late Emily McQueen-Borden (’99) and her daughter, Greta

But that was the thing. In what I first perceived as a group of intimidating, overly-perfect women, post-college life revealed astounding texture: doctors, artists, Peace Corps volunteers, actresses, teachers, lawyers, veterinarians, nonprofit activists. There were real characters. Honorable characters. Women of substance who would later give so much of themselves to the world. I belonged to a sorority where a debutante like Emily could do The Worm, could ultimately trade in her pearl earrings for roller derby gear, a career in physical therapy and a necktie.

When Emily and I first decided to work on a story together, I told her that I would write the story she wanted me to write. She said “I want to do it simply to brag about Kara … dealing with my illness … caring for me and our daughter while ranking number one in her law class. She is my hero.”

But I never got to write this beautiful essay. What you’re reading now is it.

On Aug. 1, 2012, I sent Emily another round of questions for the piece. I never got a response. Emily McQueen-Borden passed away on Aug. 21.

Writers spend a lot of time studying the ancient Greeks. One of the things Greeks knew an awful lot about is tragedy, and after tragedy, catharsis. A sort of purging of emotions. Insight.  Renewal. After Emily died, I watched as her sisters swooped in to comfort Kara and each other. The grief over losing such an enormous, warm, big-hearted friend was sincere; the support, as I perceived it, swift.

While for years I had reduced sorority life to something petty, I quickly realized that sisterhood, for all its flaws, is not something so easily dismissed. Somehow, while we were wrapping each other in Saran Wrap, dancing to pop songs in a seedy basement, singing decades-old songs, something much bigger was at work. The girls in the photographs from my pledge night have grown into amazing women, and they continue to inspire me in ways I never imagined.

Megan Mayhew Bergman (’02) is the author of “Birds of a Lesser Paradise” and the forthcoming novel, “Shepherd, Wolf,” both published with Scribner. She lives in rural Vermont with her husband, veterinarian Bo Bergman (’02), and their two daughters.