At the end of the Fall 2012 semester, sophomore Lindsay Hudson Ortyn stumbled across a 24-minute video that she couldn’t keep to herself. The clip was from a March 2011 TED conference, dedicated to promoting “ideas worth spreading,” and it featured independent graffiti artist JR talking about his new project, “Inside Out.”

Hudson Ortyn, fascinated by JR’s use of large-scale images to make personal statements, shared the video with juniors Kovi Konowiecki and Sean Wilkinson, friends she knew would appreciate its underlying message. Over the next two months, the three created “Inside Out: Wake,” their own interpretation of JR’s vision resulting in an over 11-foot-high and 63-foot-wide portrait of five upperclassmen chosen to represent different parts of the Wake community. 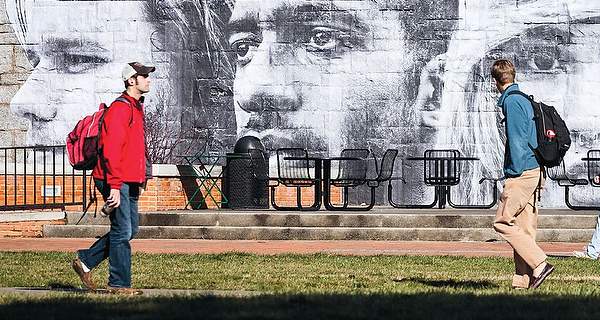 The final image, a collage of smaller print pictures Photoshopped together and pasted onto the stone wall facing the Magnolia Quad, depicts the face of each student. “We wanted students that could carry our message and articulate it to their respective social groups,” said Wilkinson, of Mill Valley, Calif. “We tried to get the biggest range as far as Greeks, non-Greeks, athletes and majors to show that Wake Forest really supports all sorts of students and talents.”

“We’re trying to promote that there is no singular Wake experience,” said Konowiecki, a midfielder on the men’s soccer team from Long Beach, Calif. “All of our individual experiences come together to form a Wake experience.”

For Konowiecki and Wilkinson, this concept was nothing new. The two had already started a blog titled “Forest Folk” that celebrated students’ unique styles and backgrounds. Despite a loyal fan base, they were looking for a way to reach the Wake community as a whole.

“We had an idea, but it wasn’t fully developed,” said Wilkinson. “We really just wanted to get a snapshot of the Wake campus at its most diverse level.” With their passion and vision intact, the three friends approached Matt Williams (’09), assistant director in the Office of Diversity and Inclusion, with their plans.

Williams helped to secure the more than $1,000 needed to carry out the “Inside Out” project and helped the three perfect a proposal to various departments. “I just offered them some advice along the way about how to capture the moment and what this means for the community,” shared Williams. “The thing that attracted me to the project was their creativity and their consciousness, how thoughtful they were about how they wanted this message of inclusion to come across.”

With the administration’s support, Hudson Ortyn, Konowiecki and Wilkinson set up a website and Facebook page to share their inspiration for the project as well as to post photos and general information regarding its development. 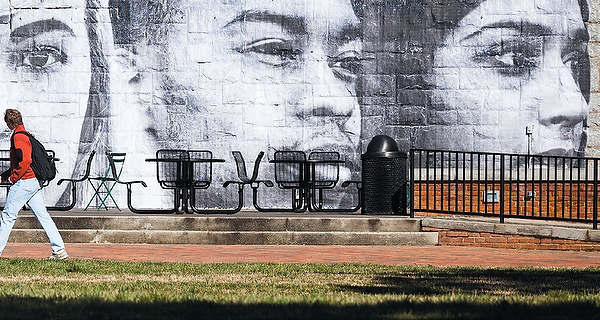 Despite a broken Kinkos printer in Winston-Salem that sent them on a nighttime trek to Raleigh to print the images, the project has presented more rewards than pitfalls. After a lengthy pasting process that took six-and-a-half hours, Konowiecki recalled putting the last strip of paper up on the wall. “We all stood there and looked at it, which was a really special moment for me having worked for seven hours and finally being able to see this finished product that we created,” he said.

Reaction to the temporary installation was extremely positive, initiating discussions amongst students and faculty about diversity and inclusion on Wake’s campus. “We’re seeing the unraveling effect of it as it reaches different demographics,” said Wilkinson. “From a visual standpoint, people are really enjoying it but we’re still waiting for the message to truly sink in.”

For senior Nick Reichert that message had already made an impact. “I saw JR’s TED talk and I’m so happy that this is happening at Wake Forest and it should continue to happen at Wake in the future,” said Reichert. “The project brings the community together through dialogue and reflection on the state of the student body here.”

Williams agreed, and he was happy to serve as the staff member behind the project. “I thought back to [former University chaplain] Ed Christman (’50, JD ’53) and his role when Ed Reynolds (’64) became a student here [in 1962],” Williams said. “This year we’re celebrating the 50th anniversary of integration, and Christman’s example inspires me to be the type of administrator that he was, someone committed to helping students navigate their way at this University.”

As for what’s next for the trio, a documentary is in the works that they hope will bring the project full circle. Hudson Ortyn, from Newton Square, Pa., sees the film as a way for the message of mutual respect and inclusion to continue beyond the confines of Wake Forest and inspire more students to bring such issues to the forefront.