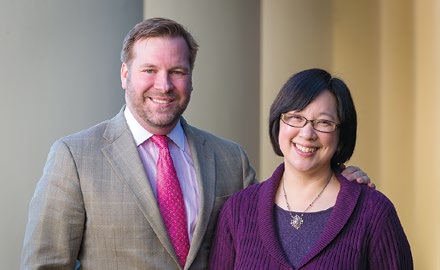 Wade Murphy and Mary Foskett, professor of religion and director of
the Humanities Institute

In February, Wade Murphy (’00), executive vice president of Marmik Oil Co. in El Dorado, Ark., made history as the only person under 35 to make a single seven-figure gift in the University’s history. Murphy, a member of the College Board of Visitors, donated $1 million to the Humanities Institute. In 2010 the National Endowment for the Humanities offered a $500,000 Challenge Grant if the University could raise $1.5 million by July 2015. Murphy’s gift fulfills the challenge.

Following are edited, condensed excerpts of Murphy’s answers to questions posed by Maria Henson (’82), editor of Wake Forest Magazine. A shorter version of the Q&A appears in the Summer 2013 print issue of the magazine.

You’re an oil man from a long line of oil and gas business entrepreneurs. What made you a donor to the Humanities Institute?

Is it true that Provost Emeritus Ed Wilson (’43) brought tears to your eyes when he thanked you for supporting the Humanities Institute?

It brings tears to my eyes remembering the night. It was one of the most humbling experiences of my life. And so, yes, it did. Somebody that I respected so much and had identified and encapsulated the Wake Forest experience for me acknowledging that I can be a part of that and that this is good and this is worthwhile, it was powerful. It was very powerful.

Why didn’t you want your name on a building?

A — there’s no building. Wake Forest is beyond bricks and mortar. I think it’s really important for us to remember that — that what we learn at Wake isn’t just in a building. Yes, I love Scales and I love Tribble, and I love all of those buildings that I spent a lot of time in, but the way the Humanities Institute was being discussed and promoted, it really got me excited to say this is bigger than bricks and mortar.

What stands out for you as some of the Humanities Institute’s significant achievements and endeavors?

Picking and choosing one of the Humanities Institute’s endeavors, I think, is giving short shrift to the rest of them. What really stands out for me is the potential that it has going forward to be multi-semester, multi-year projects. The ability to do interdisciplinary work that transcends a single project is really its greatest strength. It’s easy to pick the recent one on the breast cancer narratives because it’s high profile, it’s a great cause, everybody loves to support it, and quite frankly it partners with the professional schools, which I think is phenomenal, but that does give short shrift to Words Awake! It gives short shrift to the water initiative that’s been ginning up and in the works. All of those are equally valuable. I hate to have to pick one. If you pick one, then that means that’s what (the institute) should be doing, but it should be doing all of it.

You are the youngest person in Wake Forest history to give such a large single gift. What is the message in that?

I don’t think of myself as a young alumnus anymore. I think that that’s part of the message — not that young is a pejorative term, but on some level it still relegates us to support roles. There are a lot of people in my generation and in my class who are not just interested but are incredibly capable of leading. I want to remind us that we can pull that off now. And quite frankly, the other thing is giving in what you believed in, and what made Wake Forest Wake Forest for you keeps that part alive. I think it’s important for my generation of donors to identify and capture what made Wake Forest unique and special for them and ensure that that remains at Wake Forest.

What is the misconception about young donors?

I think the misconception is that on some level we only give because we’re in high-profile jobs that allow us to have enough money — free capital — to give. That might not be a misconception, but to me it’s a slippery slope because it encourages people to think, “Oh, we only need to go after or encourage people to go into industries and jobs that can produce high-net-worth donors.” A true misconception about young donors is that we don’t understand the nature of philanthropy. I think a lot of people think philanthropic endeavors are for retirement phase; it’s a legacy proposition.

I think it goes to (Provost) Rogan (Kersh’s) comment about a generational shift and paradigm shift from the Baby Boomers to the Gen-Xers to the Millennials. I’m kind of stuck in the middle at the tail end of Gen-Xers, but we don’t think of it as a capstone achievement anymore. Philanthropy is just as important a part of your bio and your profile because it’s what you believe in, and your job isn’t the only thing that defines you. The other things that define you are what boards you sit on and what charities you give to and where you go and what you spend your time on; and that, for us, is equally as important as what we do from 9 to 5.

Who were some of your favorite people at Wake Forest?

There were a lot of people I loved and respected and didn’t have a lot of interaction with, like Ed Wilson. It’s no secret that (Vice President and Dean for Student Affairs) Ken Zick has been my biggest and greatest mentor at Wake Forest. He helped me take advantage of everything Wake has to offer. I probably wouldn’t be as diligent if it weren’t for (history professor) Jim Barefield. He is by far one of my favorite people. Drove me crazy when I had him as a professor, but he had that kind of tough academic love that makes you respect somebody that much more.

One of my favorite people taught Italian at Casa Artom when we were in Venice. He was this great guy who should have been a Wake Forester, but he was a Venetian who came to the house to teach us Italian. The entire Casa Artom class in fall of my junior year — that entire class led by (history professor) Alan Williams and his wife, Kristen Neuschel, who teaches at Duke, was such a transformational experience. They were some of my favorite people at Wake and will be forever. Whether we talk or not, that was a bond we shared. My closest friend, Cullen Lee. I was in his wedding, and his children are my godchildren. He was my junior roommate at Wake. He’s an incredibly important person in my life. He’s one of those combinations: ultracompetitive, which is purely Wake Forest, and incredibly supportive, which is also purely Wake Forest. And I would have to add every person who teaches in Scales.

You were a history major who loved theatre. How has that combination helped you in your life?

Sometimes I think my business partners would tell you that it’s a hindrance because I keep explaining the historical context of why things are happening. It helps a great deal in being able to have a presence, being able to do negotiations and speak in a room with CEOs, presidents, vice presidents and leaders of state in business. Sometimes you even pull from soliloquies you learned in the theatre department. And sometimes you just remember how presence is important and that perception is a fundamental part of reality.

What is special and unique about Wake Forest in your experience?

The most important thing that I hold special about Wake Forest is that whatever discipline you choose you’re not only required by your divisionals but encouraged by everybody — professors, administration and your fellow students — to explore what else is out there. It wasn’t unusual for an economics major to take a random religion class. It wasn’t unusual for the history major to take a random econ class. Nobody looked down on that. People supported you and cheered you on. If you took a class that was too much of a stretch for you, everybody wanted to help you through it. That’s just unique in life. Why wouldn’t you want to do anything in your power to make sure that people at that formative stage in their intellectual and personal development have that?

What does the future hold for Wade Murphy as Wake Forest philanthropist?

Whatever Wake Forest will allow me to do. And I’m not trying to be flippant about it, either. Education — whether it’s education reform or access or scholarships — has always been powerful and important for me and my entire family. Generationally, it’s been important for us. Being involved in a school that helped make me me is the greatest gift I can get. What’s the future for Wade Murphy? It shouldn’t be about me. It should be about the type of thought process and the type of access and interaction that hopefully this (donation) is going to create for my generation and cross-generationally.

What have I not asked that you wish I had?

There have been a few people who’ve asked me if this (gift) was a response or a rebuttal to the new business school and all of the focus on the professional school, and I just want to make it really, really clear that those aren’t mutually exclusive. I love that somebody else gave a lot of money for a business school, and I love that there’s somebody like me who will give a lot of money to the Humanities Institute. Those aren’t competing principles.