When creating a list of 101 things you love about something, you most likely do it with the knowledge that someone’s favorite will be left off — and that they will surely let you know. Such has been the case with the Summer 2013 issue and our list of “101 Things We Love About Wake Forest.”

Our production process began last winter when we solicited items for the list from alumni, students and all Wake Foresters. We even put paper and markers outside the magazine editor’s office so that passers-by could add their favorites.

Audience feedback helped us build the list, and when the magazine was published in June we reminded readers items were “randomly selected and listed in no particular order.” We made sure to ask, “Did we leave out one of your favorites?” We did, and as we hoped, you let us know. 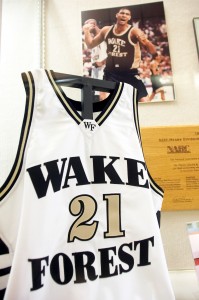 “Can’t believe you left out Tim Duncan,” we heard. We know there’s not a Wake Forester alive who doesn’t love Tim Duncan (’97) or Chris Paul (’07) or Randolph Childress (’95) … or for that matter our 2012 Olympians or the 1955 national championship baseball team or the field hockey and men’s soccer national champions. The topic of athletics is a “101 list” in itself. Hmmmmm, idea …

No direct mention of the Old Gold and Black prompted William J. Volker (BA, BS, MSA ’06) to ask, “What about the OGB? As a former Lilting Banshee I would have allowed us to slip to No. 5 out of respect for such a steady source of material. I always looked forward to Thursdays at WFU, and I continue to be impressed by some of the post-Old Gold and Black careers of several editors/contributors.” We’re with you on that, Will. While OG&B — or the Howler and other publications — were not specifically on the list, No. 36 Pub Row, was our collective salute to student publishing endeavors.

Fred M. Hodges III (’80) posted on the magazine Facebook page that he “Just wanted to bring something to your attention about #72 Casa Artom in the latest issue. You forgot to mention the fact that J.C.D. Bailey (’53) and former Sen. Jesse Helms helped make everything possible. Also, #81 has a terrible omission. Gary Hallberg (’80) was the NCAA individual medalist and he was not listed.” Thanks, Fred, for setting us straight. 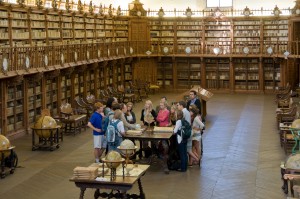 Students and their resident professor, Javier Garcia Garrado, in the Old Library at the University of Salamanca.

A faculty member noted the University’s international study initiatives in Dijon, Salamanca and the Southern Cone were not on the list, which did include residential programs in London, Venice and Vienna.

A reader would like to have seen specific mention of Hit the Bricks (a photo of the event illustrated No. 45, “Greek Do-Gooders.”) Another wondered why William G. “Bill” Starling (’57), legendary director of undergraduate admissions who extolled Wake Forest’s virtues to generations of prospective students, was not included.

Wake Forest Magazine thanks the readers who helped us build the “101 Things” list and also those who keep us on our toes. We’re starting a list of “101 More Things …” and you’re at the top!