These and many more random acts of kindness took place June 21 to celebrate what would have been the 31st birthday of Fred Scully (’04, MSA ’05), who died in May 2012 after a six-month battle with cancer.

During Fred’s illness, said his wife, Cynthia Scully (’03), the family was repeatedly blessed by caring family, friends, neighbors and even strangers who provided meals, lawn care, and even decorated their home in Davidson, N.C., with Christmas lights. Fred’s co-workers at Bank of America bought him an iPad to provide a distraction. 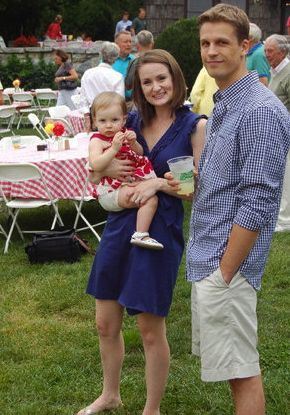 Fred and Cynthia Scully with their daughter.

“We spent hours planning ways to thank their many supporters and dreamed of paying it all forward to help others,” she said, “but sadly, Fred passed away before he really got his chance. So each year on his birthday, we ‘Pay It Forward for Fred’ by performing a random act of kindness on his behalf.”

“Fred was always such a grateful person,” said Cynthia, “and when he was diagnosed he carried that attitude forward. At the end of the day, he’d be exhausted, but would be focused on others, asking about the nurses, or other patients.”

After his death last year, Cynthia went to Facebook and proposed a “Pay it Forward for Fred” day on June 21, asking people to perform random acts of kindness in his name. Several registered to be bone marrow donors, delivered cookies to emergency responders and donated to Hospice in Fred’s memory. The tribute continued this year, and Cynthia is already working toward 2014.

Fred was a Double Deac and a Wake Forest fan through and through, she said, but more importantly his desire to “Pay It Forward” beautifully embodies the spirit of Pro Humanitate. “I believe that the Wake Forest community would be inspired by the incredible legacy of their fellow Deacon,” she said. “He was so inspiring, because he remained focused on what he had and not what he was losing.”