Independent film producer Richard DiPatri (’93) followed his heart, and it led him on a long and winding journey that eventually ended in Los Angeles and the career he always wanted.

DiPatri’s most recently produced film, “Finding Joy,” debuted in June and is the quirky story of a man who falls in love with a woman who may or may not be dying and asks him to write her obituary.

A double major in economics and Spanish, DiPatri stayed in Winston-Salem four years after graduation and worked for a company servicing student loans. He wasn’t sure that’s what he wanted to do with his life. 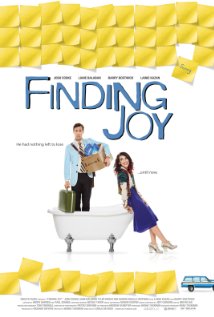 Since he had always been a movie lover but never seen it as a viable career option, he decided to audit Professor of Communication Mary Dalton’s (’83) screenwriting class on his lunch hour. He managed to write a feature-length screenplay while working full-time. That got him on the road to filmmaking.

“I spent one year at the North Carolina School of the Arts School of Filmmaking and met incredible people and classmates, many of whom are successful in the industry,” says DiPatri, who then got a job working on “Last Lives” starring Judge Reinhold and chose to learn on the job rather than continue at UNCSA. He worked on three more films in the Winston-Salem area before heading home to Red Bank, N.J., then to a corporate video production job in Washington, D.C.

Then karma intervened. In 1999, almost a year to the day after he went to work in D.C., he opened his address book to contact a producer he knew in Los Angeles. He never made the call but got home from work that evening to find a message from the man, who invited him to join the crew in Lithuania as production coordinator on “The New Adventures of Robin Hood.”

In 2000 he moved to Los Angeles and has since made films in Florida, Las Vegas, Croatia, Idaho and Portland. “Now with a wife and two kids I don’t travel as much as I’d like to,” says DiPatri, adding that one of his next destinations may be North Carolina to produce a movie here in 2016.