James Ivory (’85) stood in disbelief outside Johnson Residence Hall. It was a women’s residence hall when he was a student; today, it’s home for his son, Sebastian. 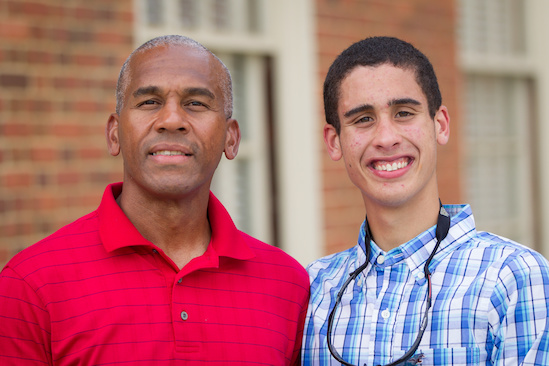 For alumni parents, freshman move-in on Aug. 22 was a day of looking back and looking ahead, remembering lifelong friends and professors who became mentors, and sharing memories of their time at Wake Forest while encouraging their children to forge their own path.

“I know my way around campus, but my son is moving into Johnson; Johnson was a women’s dorm,” said Ivory, remembering when the South Campus dorms were all female. “The campus is still familiar, yet unfamiliar. There are these uncanny moments that seem to connect my past with his present.”

Ivory insists he’s not chasing ghosts, but the connections intrigue father and son: One of Ivory’s mentors as a student was Professor of English James Hans; Sebastian is in Hans’ freshman English class. The connections extend to the names of their roommates: both their freshman roommates were named John, but each is called Jack. (Ivory still keeps up with his freshman roommate, Jack Kalavritinos (’85)). And the final link between father and son: both came to Wake Forest planning to major in political science and attend law school.

For his part, Sebastian said he enjoys his dad’s stories. His favorite: how male students had to yell “guy on the hall” when visiting female friends in Johnson Hall. “I’m ecstatic to be here,” Sebastian said. “I’ve been counting down the days for months now. Last night, I couldn’t even sleep, I was so excited to get on campus.” 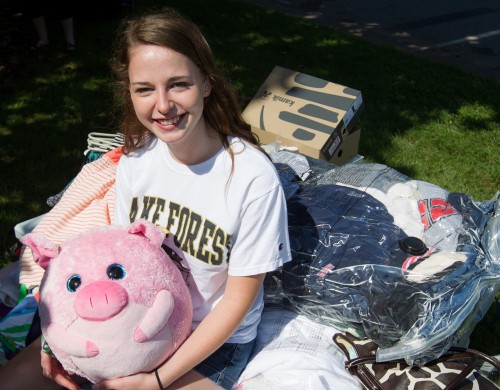 Freshman Lisa Shaffer brought along a friend from home to her new home at Wake Forest.

About 1,200 first-year students from 43 states and around the world moved into six residence halls on South Campus on a hot, muggy day. About 78 students, or 6 percent of the class, are children of alumni. Football, basketball and volleyball players helped new students lug suitcases, large-screen TVs, racks of clothes and stuffed animals to their new rooms, leaving parents plenty of time to reminisce. “I’m filled with joy and pride and wishing I could be back here and do it again,” said Jack Maier (’84), who was moving his daughter, Catherine, into Bostwick Hall. 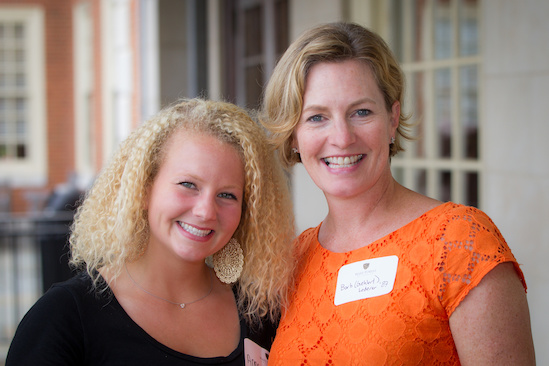 Barb Lederer (’87), at right, and her daughter, Anne-Levert.

Barb Gehlert Lederer (’87) from Fairfield, Conn., was filled with memories as she walked to her daughter’s new room in Luter Hall — New Dorm back in her day — just a couple of doors down from her junior-year room on what was then the Fidele hall. She hopes her daughter, Anne-Levert, will find the lasting friendships that she found. “These are going to be friends she’ll know the rest of her life. When she was accepted, people I haven’t seen in 25 years reached out to her.”

Like Ivory, Lederer was eager to share a story of reconnecting with one of her favorite professors, Professor of Accountancy Dale Martin. He warmly welcomed Lederer and Anne-Levert when they visited campus last spring, even though Lederer hadn’t seen him in 25 years. On another visit to campus, Anne-Levert was walking around the Scales Fine Arts Center when Professor of Art Bernadine Barnes offered to show her around the art studios. Those interactions greatly influenced her decision to come to Wake Forest, Anne-Levert said. 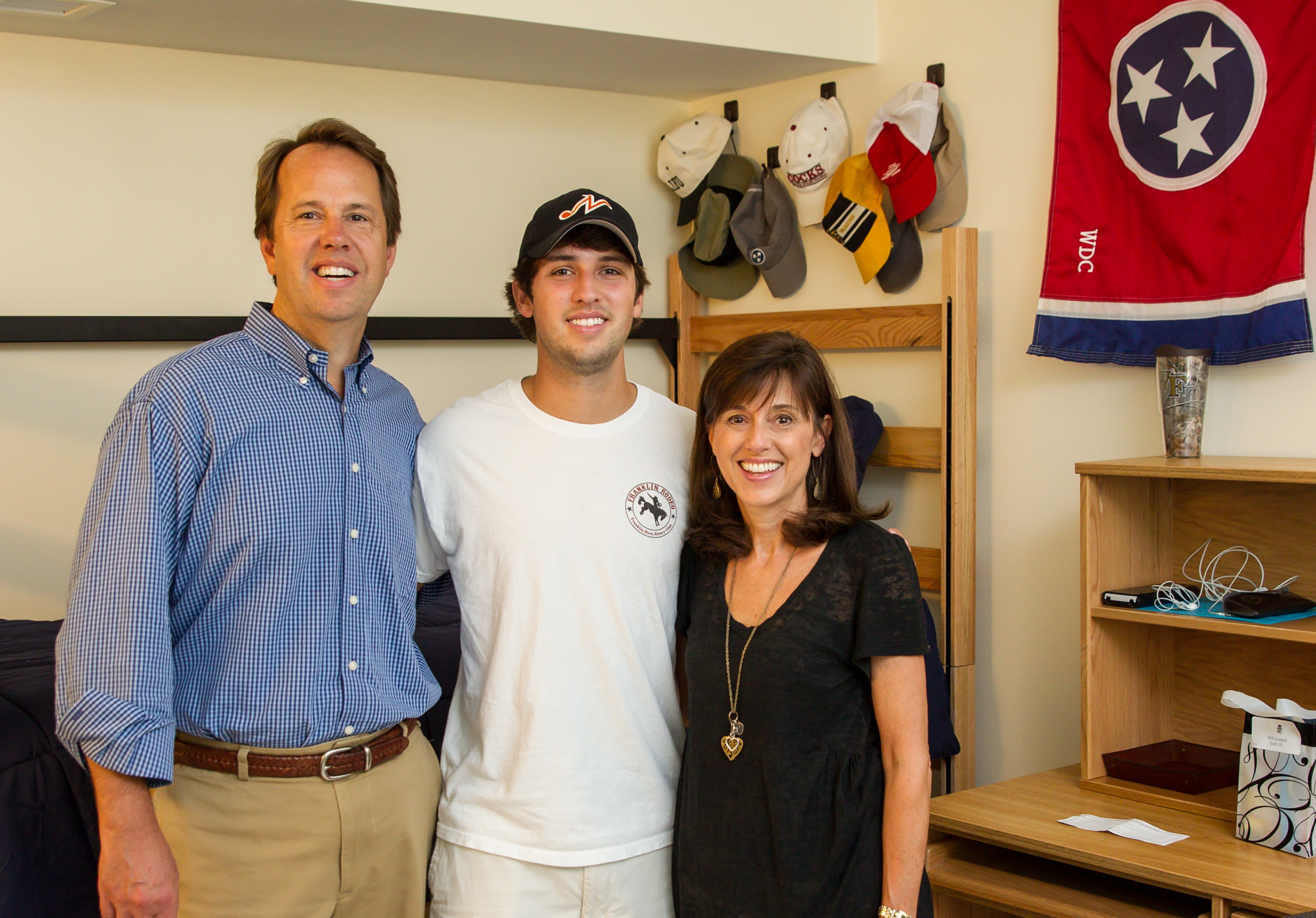 Webb (’81) and Donna Campbell and their son Will.

In South Hall, Webb (’81) and Donna Campbell from Nashville, Tenn., helped their son, Will, move into a spacious room in South Hall, the newest residence hall on South Campus. Their daughter, Kyle, is a senior. Webb Campbell said he hopes his son expands his world and makes the friendships like the did that last long after college.

It was an emotional day for Webb Campbell; his father, noted author, minister and civil rights leader Will D. Campbell (’48), died in June. “Daddy was very proud of Kyle and when Will made the decision we told him about it,” Webb Campbell said. “For the last two years of his life, he wore a Wake Forest baseball cap.” 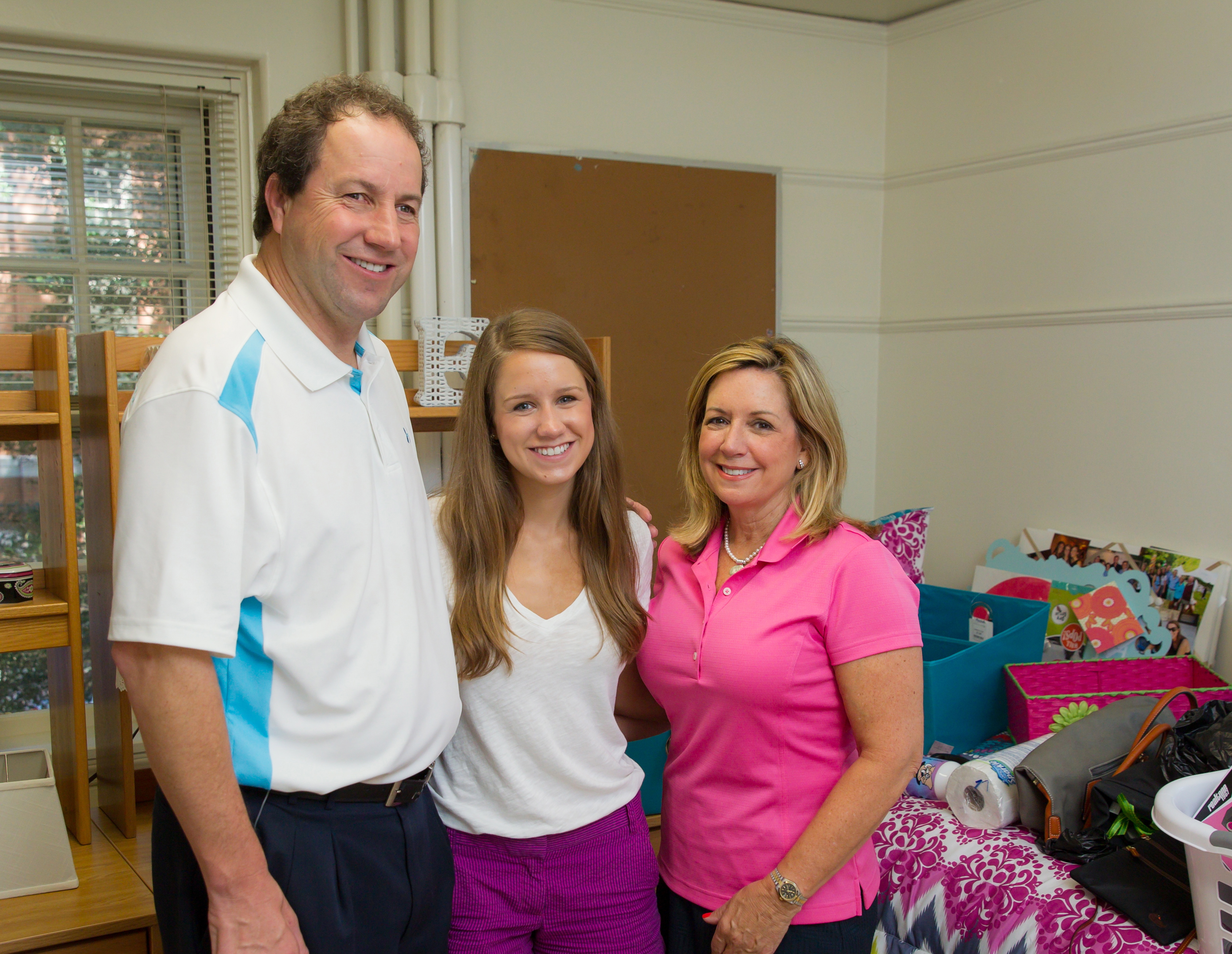 Jack and (’78, JD ’81) and Mary Jo Cunningham (’80) Elliott reminisced as their daughter, Emily, moved into Bostwick Hall. Their other daughter, Laura, graduated in 2010. Mary Elliott remembers the “strange 1970s” stuff that she brought with her to Wake Forest: a stereo, a terrarium and lots of potted plants.

The Elliotts have hosted receptions for new students and their families at their home in Pittsburgh, Pa., for several years. Jack Elliott said he’s told his daughter that the next four years are a “wonderful time of your life to make new friends and have new experiences. I can vicariously recreate some of that through Emily,” he said with a smile. “But it’s her experience, not ours.” 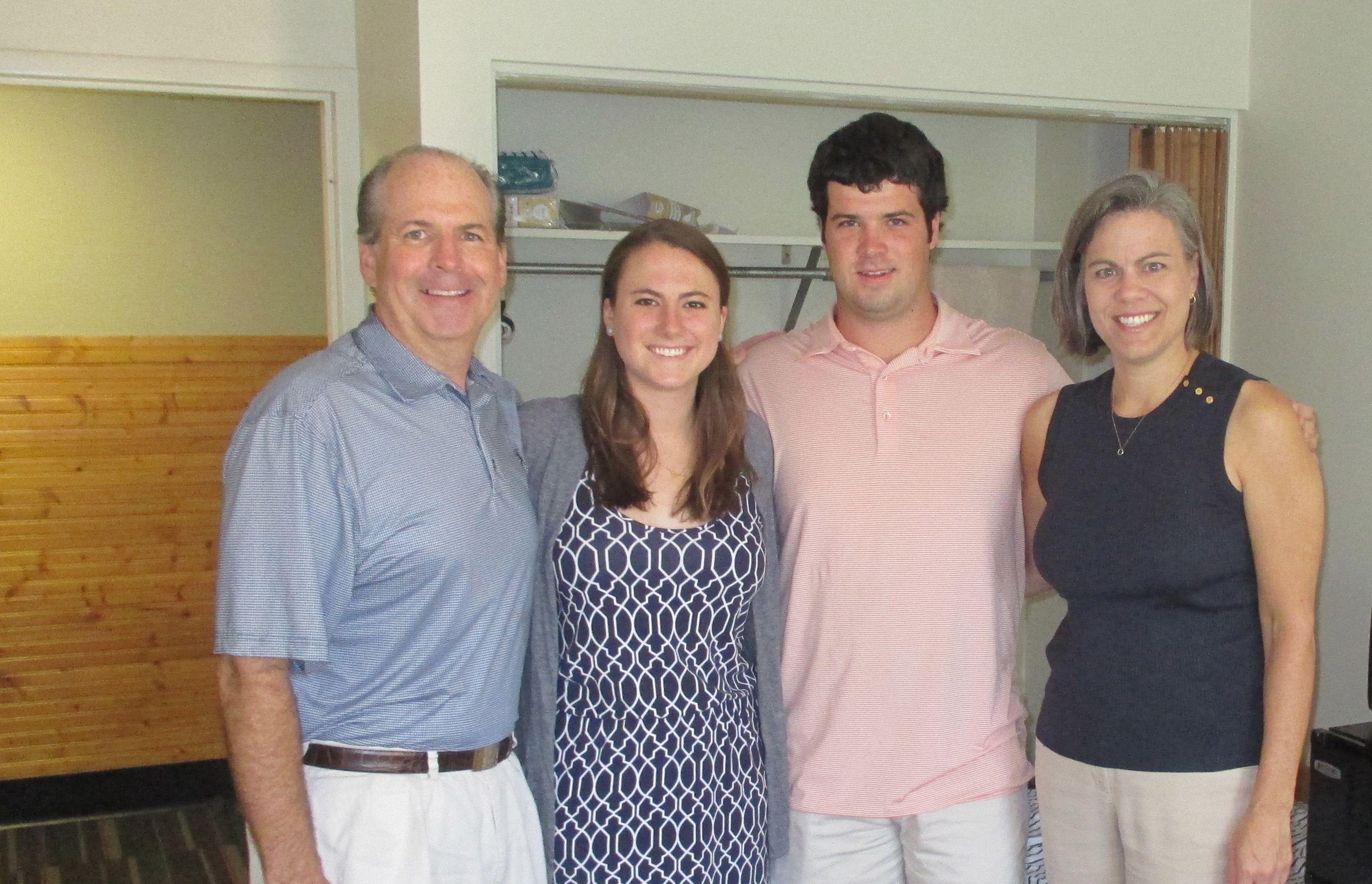 Doug (’88) and Shannan (’87) Townsend with their children, Virginia and Spence.

Doug Townsend (’88) of Siler City, N.C., was feeling a mix of “excitement and jealousy” as he and his wife, Shannan Spence Townsend (’87), moved their son, Spence, into his new room in Collins Hall. Their daughter, Virginia, is a junior. “I wish I was coming back as a student … a lot of good memories here,” he said. “Remember how quickly those four years go by,” Shannan added.

Spence Townsend is the latest in a long line of family members to attend Wake Forest. His maternal grandfather and great-grandfather both attended Wake Forest. Doug Townsend has a number of Wake Foresters on his side of the family, too, including an uncle, the late trustee James W. Mason (’38), and his cousin Celeste Pittman (’67) and her children, Nell (’97) and Will (’00, JD/MBA ’05).

The Townsends, who’ve served on the Wake Forest Parents’ Council and Alumni Council, said they’ve told Spence about the importance of the University’s motto, Pro Humanitate, something that Mason passed on to Doug when he enrolled at Wake Forest. “He sat me down in his office and told me that it’s not a four-year experience, it’s a lifelong experience. He wanted me to take that commitment very seriously.” 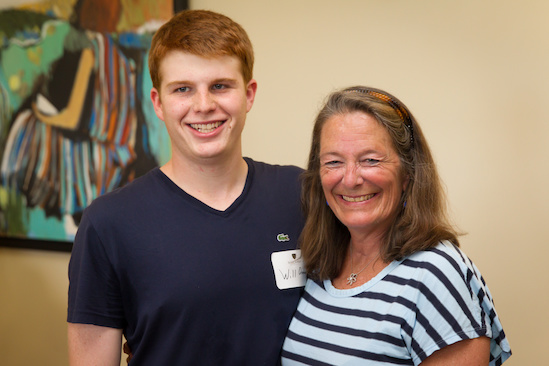 Angie DeMent said she’s being thinking about her Wake Forest experience and what lies ahead for Will for the last week. “I hope he will build relationships with professors and find good friends, like I did, and embrace the fact that it’s a small community. It’s still a small school where the people care.” 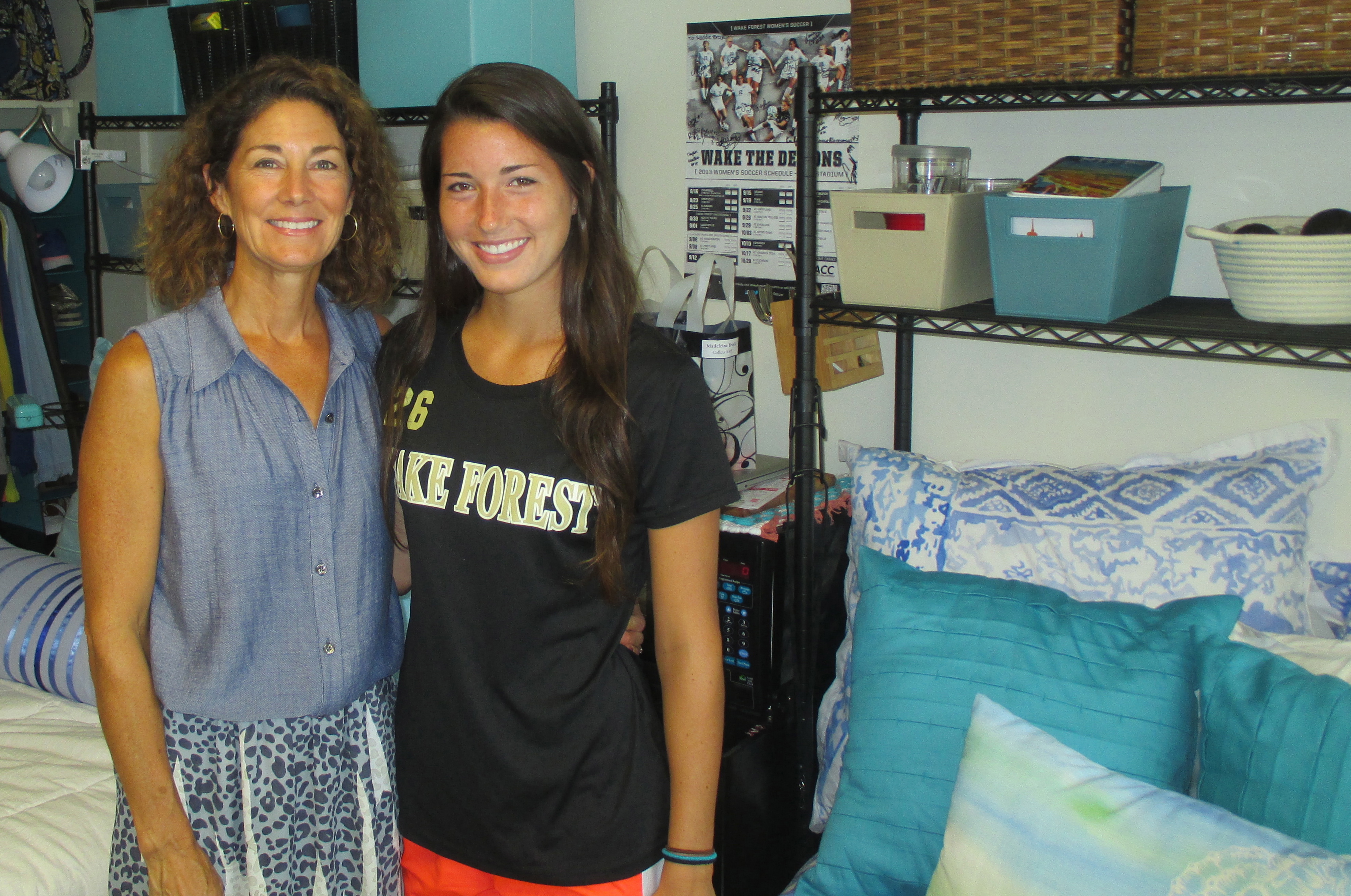 Richard (’83) and Diana Doster (’83) Brock of Asheville, N.C., were especially thrilled that their daughter, Maddie, picked Wake Forest after their two oldest daughters chose other schools. Maddie is on the women’s soccer team.

“I remember the butterflies,” Diana Brock said as she recalled her own move-in day. “I feel them now for her. I hope she’ll look back on this 30 years later like I’m doing today and say this was the best four years of her life.”

Heather Wright Maier (’84) had a long drive from Potomac, Md., to bond with her daughter, Catherine Maier, before spending the night in Winston-Salem with her college roommate, Leslie McCutcheon Greene (’84), and her husband, Jerry Greene (’84, MBA ’92). 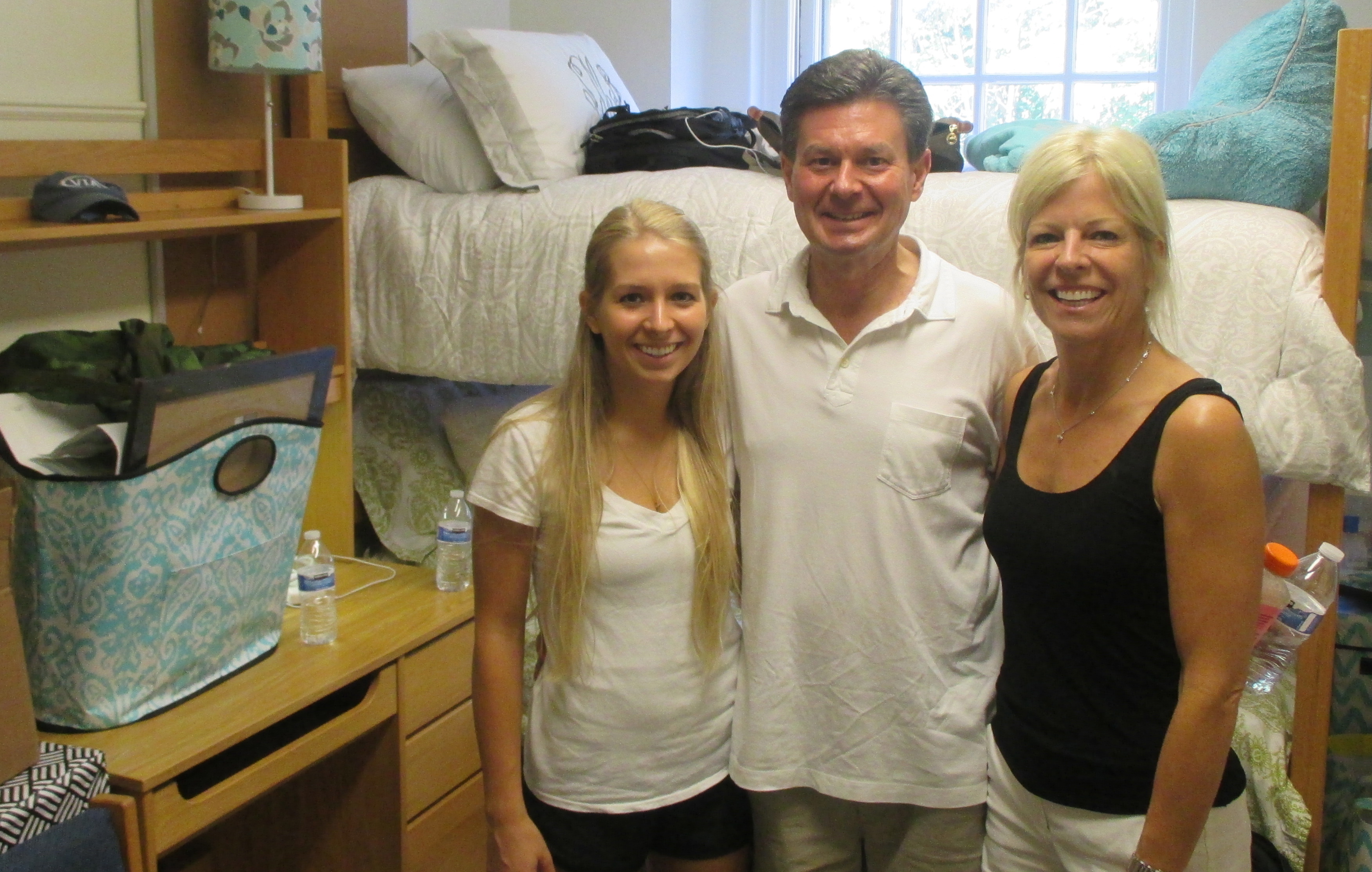 Maier says she still keeps up with 50 or more of her college friends. “Cathy has seen the connections that we made at Wake. We had an incredible class. She’s seeing that she could make friends for life.”

Maier still remembers her whole family packing into a car, with a U-Haul behind it, when she first came to Wake Forest. “It doesn’t seem that long ago,” she said of her college days. “How do I have a daughter who’s old enough to come here?”