On this warm day in May, the sounds of post-Commence-ment cleanup and chirping birds punctuate an otherwise eerie calm that descends upon campus following Wake Forest’s most festive of celebrations. Another class has gone, a new one will be here soon. For those who have just bid farewell to Wake Forest, it is a time to rejoice, reflect and renew. For those who remain on campus, the brief lull presents a chance to do the same.

The spring magazine is on press and our attention has turned to fall and this issue featuring “Portraits of Pro Humanitate.” In keeping with the theme I’m on my way to the Quad for a cordial conversation about the meaning of the motto with Associate Professor and Chair of Classical Languages James Powell, a scholar who has studied its Latin roots extensively. 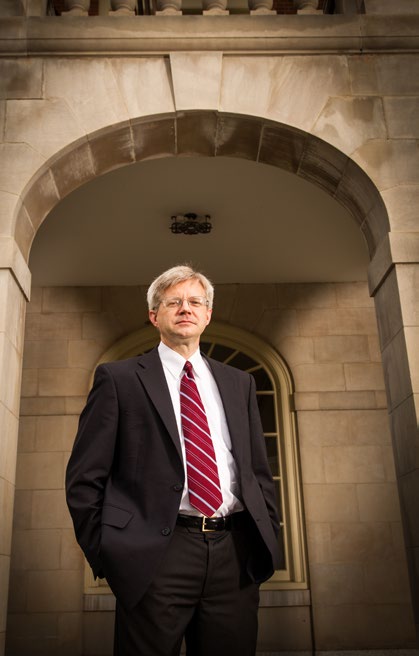 Powell, an unassuming classics professor who finds beauty in books, opera and logic, is well known around campus for his intellect, teaching and the fact that he doesn’t own a television or operate a vehicle. With the soft-spoken eloquence of an Alabama boy who came to Wake Forest in 1988 with degrees from Emory and Yale, he is respected among peers as the passionate guardian of an ancient world.

He is equally passionate about protecting the University’s heritage and is a standard-bearer for the ideals embodied in Pro Humanitate. Those attributes made him a natural choice to speak on the meaning of the motto at Founders’ Day Convocation in 2012.

Walking to our meeting place I recall the day he stood before perhaps his largest “class” ever — students, faculty, staff, alumni and guests in Wait Chapel — and presented a thoughtful Latin lesson, teaching us that “for humanity” is probably most often understood to mean “we do what we do for the sake of humanity.” While that is a compelling reading of the motto, he said in his remarks, as a university we should be mindful of our wider obligations to serve society. Then, as one might expect of a professor and lifelong learner, he took the lesson a step further, noting that the Romans never used humanitas as the collective “humanity.” Often it was used to mean kindness.

Now here we are, more than a year later, sitting at a table on the Quad where he expounds on his Founders’ Day lesson, describing Pro Humanitate as a call to nurture one’s mind and spirit. “The Romans used the word humanitas to point to human cultivation and learning, and that is where they saw real humanness,” says Powell. “If Pro Humanitate is the motto of a University it seems to me that it is in this meaning that we are getting close to our real commitment — what constitutes genuine human flourishing.”

He acknowledges the University’s emphasis on “giving back” but cautions against making a summons to public service the motto’s “default position.” Having himself served Wake Forest in academic and administrative roles (and honored for his teaching and advising skills), Powell values service as a component of a well-rounded education. “Absolutely one can argue that service is a part of human flourishing,” he says. “My only problem is when you’ve exhausted the meaning of the motto when you say that.”

In his study of perhaps the two most heralded words in Wake Forest history, Powell has discovered a richness, the likes of which an institution committed to the life of the mind should not overlook. Many organizations may call us to public service, he tells me, but academic institutions have a particular responsibility to help students reach their full potential as humans. Studying classical languages or reading philosophy, listening to opera or creating dance, are, to Powell, manifestations of Pro Humanitate in its most profound sense.

As we part ways, the professor says he’s off to spend the summer reading. I head back to the office, pausing on the way to study footprints embedded in the Quad lawn — reminders of graduates who literally left their mark on this place. Having read, written, performed, argued, researched, invented, volunteered, competed and otherwise embraced the extraordinary opportunity to flourish that was their Wake Forest education, these alumni are the newest caretakers of its legacy.

On this May day it is difficult to imagine a time when James Powell’s meaning of the motto will not ring constant and true, like the bells of Wait Chapel: “We’re a university; education of mind and spirit is what we ought to be about.”

Pro Humanitate. We are guardians, all.