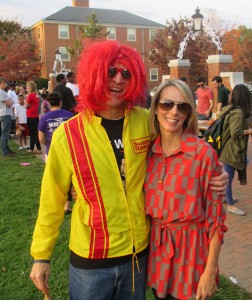 (This story originally appeared in 2013.)

Libby Bell (’93) and her four children joined about 1,000 little ghouls, ghosts and goblins on a festive Hearn Plaza Wednesday afternoon during the 25th annual Project Pumpkin.

Back in 1989, Bell was the chief pumpkin who started Wake Forest’s annual Halloween festival for underprivileged children. In the years since, it’s become a favorite campus tradition and the largest student-service project.

Yet Bell never gave it much thought after she graduated. She was invited back this year to celebrate Project Pumpkin’s 25th anniversary and to see first-hand how big an event it’s become. Local children aged 4-10 from various community agencies enjoyed carnival games, entertainment, haunted houses and, of course, trick-or-treating on a beautiful fall afternoon.

Bell never imagined that one day she’d be bringing her own children to join the fun. “I’m amazed and thrilled” at how much the festival has grown, she said, while walking around Hearn Plaza with her husband, Tim Ryan, while their four children — Davis (13), Mattie (10), Gray (7) and Parker (17 months) — enjoyed games and collected candy. Bell’s mother came too; she provided card tables for games and money for candy that very first year. 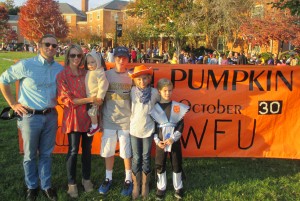 “I’m so excited to be back,” said Bell, who now lives in Charlotte. “My kids are so excited. I wasn’t sure they would understand it until they read the article (on the history of Project Pumpkin in the fall Wake Forest Magazine). The article showed that if they have a good idea to help someone else, they should try it and it might take root; you never know what will happen.”

As the article explained, Project Pumpkin began with Bell and a couple of friends on her freshman hall — Bostwick 2B — brainstorming about how to make a difference in their new community. The Volunteer Service Corps (VSC) had just been founded, and a wave of volunteerism was sweeping the campus. 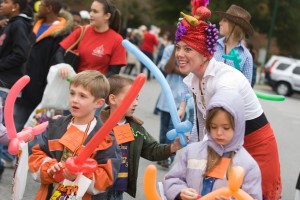 Bell, who was from Greenville, S.C., knew about Furman University’s spring carnival for children. Why wouldn’t something similar work at Wake Forest? “It was literally a bunch of kids sitting around trying to decide what we could do to help other people,” she said. “We were a bunch of freshmen who had just met who thought we had a great idea.”

With support from Vice President Ken Zick (P ’02, ’03), University Chaplain Ed Christman (’50, JD ’53) and VSC coordinator Henry Cooper (’53), Bell and her friends went to work. They wrote social service agencies in town to invite children to campus and lined up city buses for transportation. An older student, Dorothy Bryan Wattleworth (’90), who was from Bell’s hometown, recruited sororities and fraternities to escort children and organize games. 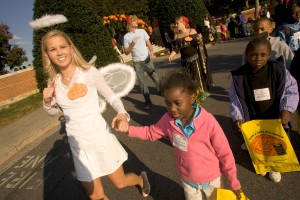 Just a few weeks later, about 125 children came to campus for carnival games, face- painting and a haunted house (which proved too scary and, Bell recalls, had to be toned down the following year.) Costumed-Wake Forest students took the children trick-or-treating in Bostwick and Johnson residence halls.

“Thinking about it as an adult now, I don’t know how we made it happen,” Bell said. “It’s a testament to Wake; I don’t think that could have happened at very many other schools.”

Within a couple of years, Project Pumpkin proved so popular that it expanded to include all of the South Campus residence halls. The festival moved to Hearn Plaza in 1995, where it’s been held every year since. 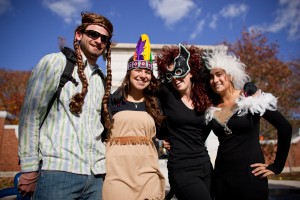 The event is equally popular with Wake Forest students, who dress up in Halloween costumes to escort children, pass out candy, host games and provide entertainment. Food Lion donates 70,000 pieces of candy a year.

“When the first busloads of children arrived, we all saw the magic of this vision,” says Katy Pugh Smith (’93), who worked with Bell that first year. “We also understood the importance of Wake’s motto and what a special place Wake Forest was that it would allow freshmen who’d been on campus only two months to launch an event that 25 years later would be a tradition.”