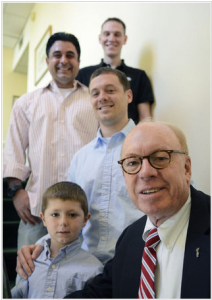 Tommy Norman (front) with some of the veterans and their families helped by Charlotte Bridge Home.

U.S. Army helicopter pilot Adam Stead faced a long recovery after he was shot in the head during a flight in Afghanistan in 2009 to pick up wounded soldiers.

Two years to the day after he was injured, he returned to his Kiowa helicopter for the first and last time for a ceremonial final flight. A military reporter asked Stead what he was going to do next as his 10-year military career came to an early end. “That’s the million dollar question,” he said.

It’s the same dilemma facing thousands of other veterans returning from Afghanistan and Iraq, many with traumatic physical injuries and mental-health problems. Fellow vet Thomas E. Norman (’66) has made it his personal mission to help Stead and other veterans start new lives in Charlotte. Since Norman founded Charlotte Bridge Home in 2011, the nonprofit agency has helped more than 475 veterans and their families bridge the gap from military to civilian life.

Norman is passionate about helping these “true American heroes.”

“As you get to know them, you start thinking about them as your son or daughter, and you see how much potential they have and what they’re dealing with to make their family work. You just can’t help but fall in love with them.”

Norman, 69, has lived most of his life in Charlotte, where his father managed a Navy shell-loading facility during World War II. He joined the Army after graduating from Wake Forest and served stateside in the special forces until 1972. He worked in banking in New York City for three years before returning to Charlotte and starting Norcom Properties, a commercial real-estate firm. In the late 1980s, Norman and two friends raised more than $350,000 to build a memorial in uptown Charlotte to honor the 101 natives of the city killed in Vietnam.

He answered his latest call to duty when a friend, retired Army Col. Kevin McDonnell, director of the U.S. Special Operations Command Care Coalition at MacDill Air Force Base in Tampa, Fla., asked a favor: Could he help a severely wounded Iraqi war veteran who wanted to move to Charlotte? Norman didn’t hesitate. “They’ve done everything their country has asked of them,” Norman said. “Look at what (veterans) have being doing — at war or on a mission everyday, and suddenly it’s all over.”

Then came another call and another. Norman and his wife, Patty, were soon welcoming veterans into their home and helping them find jobs or places to live or schools for their children. As the calls kept coming, he quickly realized the need was far outpacing his efforts.

With support from the Charlotte business community and Foundation for the Carolinas, he founded Charlotte Bridge Home. He serves as chair of its board of directors and a tireless advocate for giving veterans an opportunity to serve again, in the civilian world. The Charlotte Observer named him among those shaping the Charlotte region on its “Seven to Watch” list for 2013.

McDonnell, who commanded the U.S. Army’s 5th Special Forces Group from 2005 to 2007 — most of that time in Iraq — said Norman understands the needs of veterans. Norman and Charlotte Bridge Home take the right approach by connecting veterans with resources and opportunities in the community, rather than focusing on short-term solutions, McDonnell said. “Tommy understands that if you can get the right people in the community involved and realize that veterans have an immense amount of talent … that talent can be put to use in this country solving problems.”

With a full-time staff of six, including five veterans, Charlotte Bridge Home helps veterans find jobs, housing, counseling, health care, and day care and schools for their children, and secure military benefits and VA services. The Office of the Secretary of Defense has cited Charlotte Bridge Home as a model veteran reintegration program.

Because of its location, economy and reputation, Charlotte is a hot destination for returning veterans. The Department of Defense has told Norman to expect another 7,000 to 10,000 veterans to move there in the next few years, to join the 58,000 veterans already living in Mecklenburg County. To help veterans find jobs — their most pressing need — Charlotte Bridge Home has launched the Charlotte Alliance for Veteran Employment to encourage companies to hire veterans. 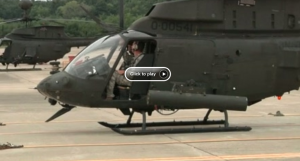 Watch an interview with Adam Stead.

Norman has built personal relationships with many veterans. He reached out to Stead as Stead was still recovering from his injuries at Fort Campbell, Ky. “He gave us a family and support system. My life wouldn’t be what it is today without him,” Stead said.

Norman helped Stead, now 33, land a job with Bank of America in Charlotte and connected him with other resources in the city. “He’s a Vietnam vet,” Stead notes. “I imagine the way the troops were treated back then kind of led him to doing this. He realized it can’t all be done by the government. He knows a lot of people in the community who want to help but don’t know how. He had the idea that he could help the community help the soldiers.”

U.S. Army Special Forces Maj. Kurt Cook, a 20-year veteran, thought he had another 10 years with his guys until he was injured in Iraq. As he recovered at Fort Bragg, N.C., from a broken neck, a brain injury and the cumulative effects of assorted other injuries suffered during three combat tours in Afghanistan and Iraq, Cook said he wasn’t sure what he was going to do next until meeting Norman. Come on to Charlotte, Norman told him.

Now the two have become close friends. Cook, 44, said he feels a special bond with Norman, who was also a Green Beret. “He doesn’t want any rewards; he just wants to give,” said Cook, who now works for Hendrick Motorsports in Concord, N.C. “He’s passionate about it. No amount of money or recognition exists for the compassion Tommy has and continues to offer for every wounded veteran.”