After you’ve eaten at every single restaurant in New Orleans — more than 700 restaurants, bistros, cafés, taverns, delis and dives — what do you do next?

If you’re Ray Cannata (’90), you slip into a sequined polyester jump suit with plunging neckline and flowing red cape, hop aboard an electric scooter and hit the streets as the King of Rock and Roll. Not exactly what you’d expect from a Presbyterian minister, but then again Cannata isn’t your typical minister.

Before he was Elvis, Cannata gained fame as “The Man Who Ate New Orleans.” He and his family moved to New Orleans in 2005, shortly after Katrina battered the city, when he was named senior pastor of Redeemer Presbyterian Church. To get to know the people of his new home, Cannata embarked on a culinary quest to eat at every nonchain restaurant in the city.

His journey through piles of po boys, gumbo, turtle soup and muffuletta was featured in the fall 2011 Wake Forest Magazine and captured in a 90-minute documentary, “The Man Who Ate New Orleans.” The film was shown on public television stations in New Orleans and at film festivals in Atlanta, New York, Miami, St. Louis and Puerto Rico last summer before being released on DVD this fall. The film led to a weekly web radio show on New Orleans’ cuisine that he hosts called “Midnight Menu + 1.”

Cannata, 45, wasn’t just going to kick back after eating at the last of the 729 restaurants on his list. Although his musical tastes run more toward Johnny Cash and New Orleans blues and jazz than the King, he was born to be an Elvi. Like his culinary journey, having some fun as Elvis is just another way to celebrate the uniqueness of New Orleans and reach out to people who might not otherwise walk through his church doors. 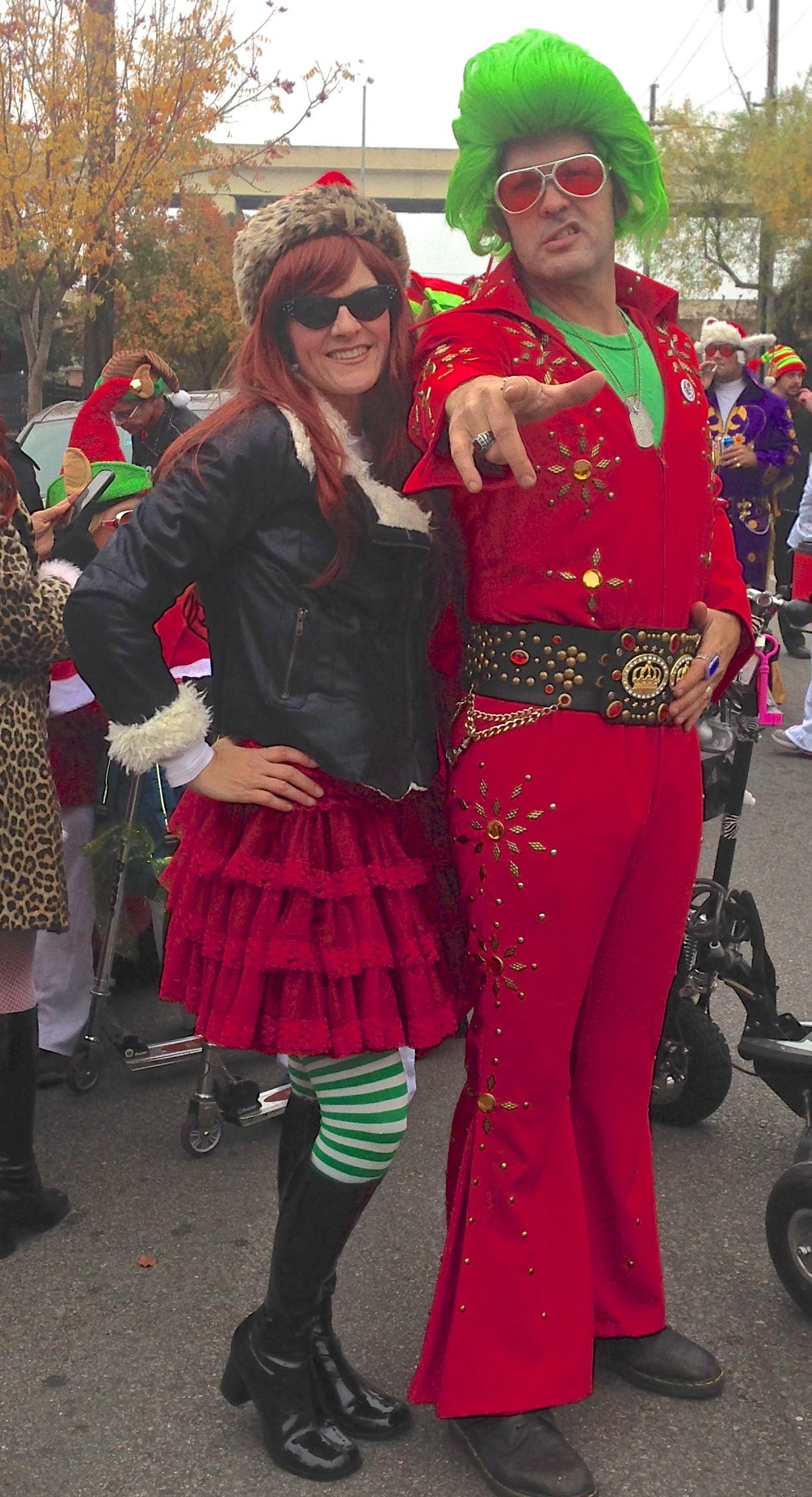 Ray Cannata: “People should smile when they see you coming.” Listen to a Podcast with Ray.

“I’m more accessible and down to earth when I’m standing there looking ridiculous in a red jumpsuit and green wig,” said Cannata, who sported just that look earlier this month in New Orleans’ annual holiday parade, accompanied by his wife, Kathy Fortier Cannata (’89), dolled up as “Priscilla,” and daughter Rachel, 10, dressed as an elf. (Son Andrew, 14, has grown a little too sophisticated for such shenanigans.)

The Rolling Elvi has become one of New Orleans’ more popular “sub krewes,” known for their zany antics, outlandish costumes and souped-up scooters. (Krewes are best known for sponsoring New Orleans’ Mardi Gras parades; sub krewes like the Elvi don’t sponsor parades but participate in parades sponsored by the larger krewes.) The 125 or so members, along with probationary members known as the Memphis Mafia and exactly 24 “Priscillas,” come from all walks of life.

With long sideburns and a fondness for what he calls “rockabilly style,” Cannata bears a strong resemblance to Elvis even when he’s not dressing the part. Several times a month, he picks out a white, red, gold or black jump suit or a black leather jacket — depending on the occasion — adds a large pompadour from the 15 or so on wig stands around his house, and heads out of his Magazine Street shotgun house to join his fellow Elvi. (Follow Ray’s adventures on his Facebook page.) 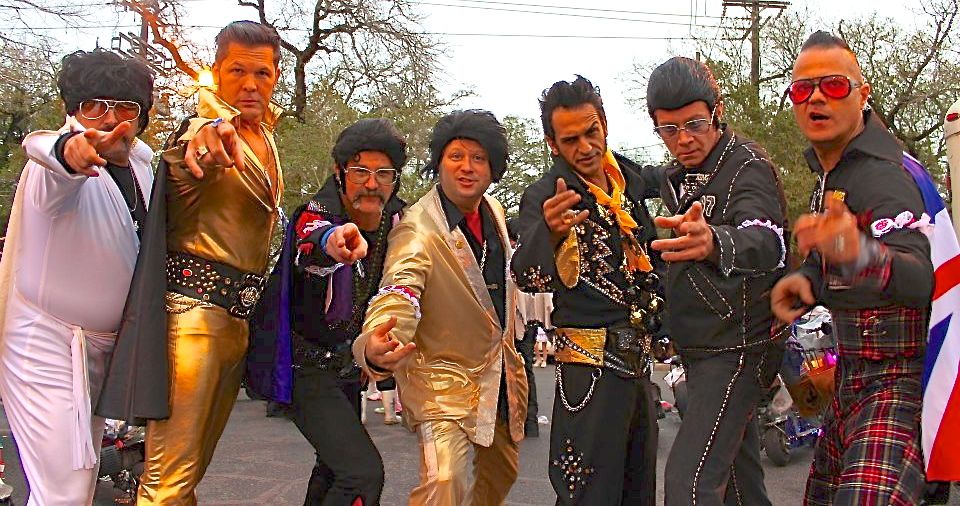 Cannata (second from left) with the Rolling Elvi. Watch a trailer from “Rolling with Kings,” a documentary on the Elvi.

The Elvi roll through Uptown and the Garden District on their scooters in a couple of Mardi Gras parades every year, throwing out Elvis 45s and CDs, Elvis dolls and ’50s kitsch. They also appear at charity events throughout the year to support, among other causes, animal-rescue efforts, a homeless shelter and a drug rehabilitation program for teenagers. They’ve become so popular that they make special appearances such as at a minor league baseball game last spring where they dressed in prison stripes to perform “Jailhouse Rock.”

Although he defies every stereotype you’ve ever had of a minister, Cannata does it all for a greater purpose. Amidst all of his Elvis hijinks, he wrote a book, “Rooted: The Apostles’ Creed,” offering a new look at the traditional Christian profession of faith. “Spreading the Gospel isn’t just what you do in church,” he said. “You can’t put the Holy Spirit in a box.” 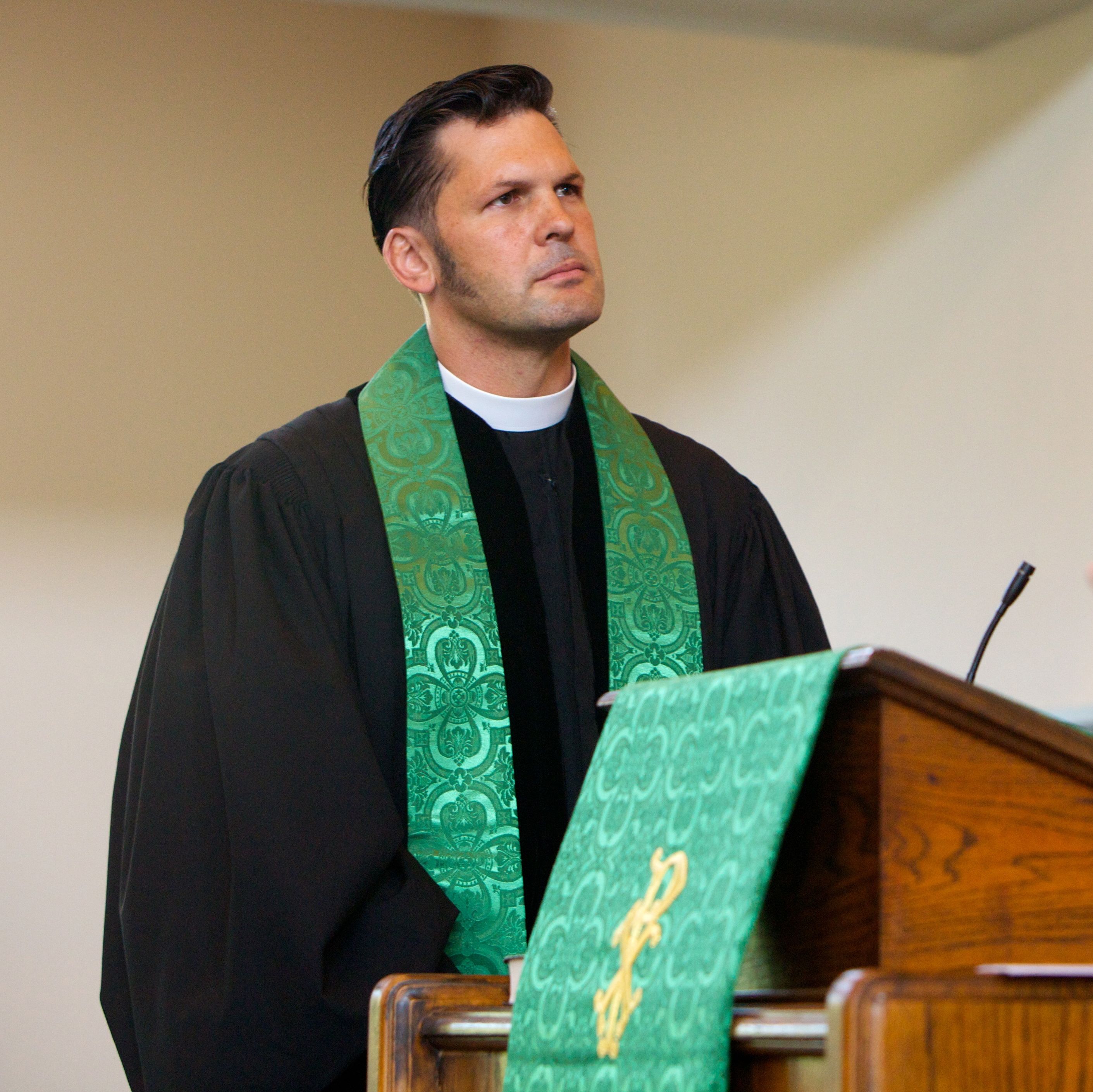 For all the fun he has, Cannata says it’s all for a greater purpose.

Breaking out of the box every chance he gets, he’s revitalized his church by emphasizing outreach to the community and a commitment to help the city rebuild from Katrina. Redeemer has grown from fewer than 20 members when he first arrived to about 250 now, outgrowing its sanctuary and moving to a larger one. He explained his vision of community outreach earlier this week in a Podcast on “Gospel Neighboring.”

Eight years after moving to New Orleans, Cannata is still eagerly swimming in the gumbo of diversity that makes up the city and loving every minute of it. The great thing about New Orleans, he’ll tell you, is that a minster originally from New Jersey can dress up as Elvis on Saturday and in a clerical robe on Sunday, and no one will think that’s the least bit odd.

As Elvis might say, Cannata can’t help falling in love, over and over, with New Orleans. “If you’ve got something to add to the gumbo, people are open to that,” Cannata said. “If you love it (New Orleans), it’s going to love you back.”