In a narrow room over the garage, paint palettes and easels await two Wake Forest fraternity brothers. Some weeks the two fellows never make it up the wooden stairs past the Christmas wreaths stored on the wall. They sit on the couch in the living room to watch sports on the big-screen television, or they opt to jawbone away these lazy afternoons meant for painting.

One is, shall we say, of solid build, a big guy, quick to tell a joke, eyes twinkling behind wire-rimmed glasses, and the owner of the Buena Vista house in Winston-Salem where the painting sessions occur (or don’t if a discussion of Wake Forest football proves engrossing.) The other is 6-feet-one-inch tall and sparrow-thin, unfolding himself like a contractor’s ruler to emerge from his top-down, blue-green Miata. A “Half Full” baseball cap from the “Life is Good” company covers any hair he might have, and the cap’s message, it turns out, could be a mantra for this quieter of the two buddies. 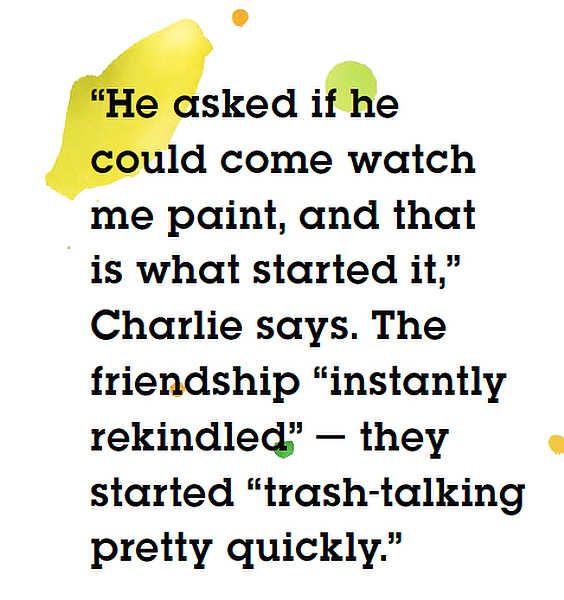 They have known each other since they were sophomores at Wake Forest, since autumn 1964. They were roommates junior year in Taylor dorm, surveying Davis Field from their suite on the third floor. They were fraternity brothers in Sigma Pi, “the ‘Animal House’ fraternity” of its day, as one calls it. They lost touch for decades. Then they found one another again in a parking lot at BB&T Field, and eventually, they became painting buddies. With 136 years between them, they have a lot to talk about.

Charlie Stott (’67), the big guy and ready talker, is 68 years old and a Raleigh native. After more than three decades of running his own insurance and financial services business called Bioplans in Winston-Salem, he embarked wholeheartedly on a new chapter: art. His brightly colored, impressionistic landscape paintings of the Lowcountry are selling for several hundred dollars a pop, but he paints solely for the sheer love of it, with “an intention to create beauty.” Dick Peterson (’67), Mr. “Life is Good,” is also 68, a native of Scotch Plains, N.J., who retains a hint of a Jersey accent. Until his retirement in 2006, he spent his career as an associate professor of technology education in the College of Education at N.C. State University and, on the hobby side, as a potter. 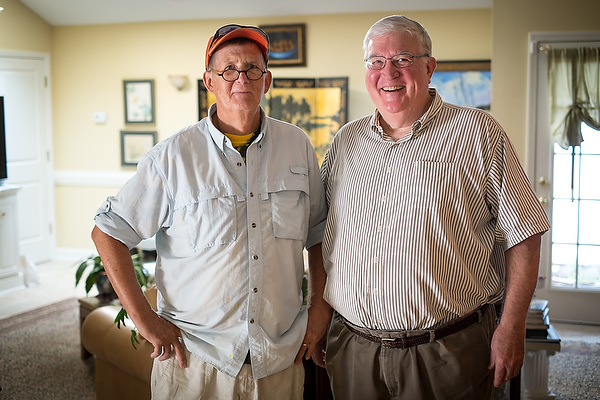 In one conversation he describes his academic path for graduate studies and says, “I’ve written several books.”

Charlie chimes in: “Who would have thunk it!”

To which Dick replies, “You took the words right out of my mouth.”

That’s typical of the way they interact. Once Dick peeked up from under his cap, looked over at Charlie and talked gratefully, sincerely, about how he had taught him to paint. “Charlie is a gifted painter. He’s so capable. I look at his work and I love it,” he said.

Sometimes when they are together they talk about the old days, with Charlie remembering the Reynolda Campus as “spankin’ new.” One or the other will mention how they grooved to Chuck Berry’s music at Homecoming, dated Salem women, stormed the women’s dorms for panty raids, bunny-hopped on the Quad, searched for “crip courses” such as “AV (audiovisual) education” and filled shower stalls to overflowing just to see the water rush the length of the hall and down the stairs. “It was hilarious!” says Charlie. They drank all night at a restaurant on Reynolda Road they nicknamed “Dumb Al’s.” The drink of choice was coffee to fuel all-nighters.

“I had a similar experience,” Dick says.

“I had to work my way up,” Charlie says.

The two got along famously as avid Demon Deacons and roommates, taking in stride an ominous notice plastered on their door one day. “The fire marshal condemned our room. I was the messy one,” Dick says. Charlie says, “We didn’t need a rug since Dick had his clothes everywhere.” They cleaned up the room and kept going. Neither thought about art or took art classes; studio art at Wake Forest didn’t exist then. 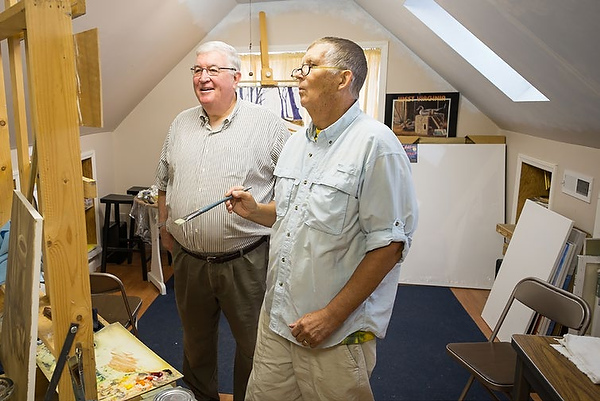 Both graduated. Both became military officers, Dick in the Army, Charlie in the Navy. Neither went to Vietnam. Both married and had children. The two buddies were in touch in 1972 when they briefly lived in Raleigh at the same time.

Then they moved on. “We had not seen each other for decades until running into each other at a football game” about eight years ago, Charlie says. “We went through the whole thing about ‘You look old! You don’t look like the last time I saw you!’ ”

When Dick and his wife, Clem, moved to Winston-Salem in 2007, the Petersons, the Stotts and some of the other Sigma Pi fraternity guys and their wives would meet for tailgate parties before football games. (They join with Sigma Pis from their era to spend a golf weekend every August at Jefferson Landing in the North Carolina mountains. Including wives, children and grandchildren, as many as 30 have attended the summer tradition.)

One night the Petersons were having dinner with Charlie and his wife, Mary Lou. “He asked if he could come watch me paint, and that is what started it,” Charlie says. The friendship “instantly rekindled” — they started “trash-talking pretty quickly,” Charlie says, naturally about sports. 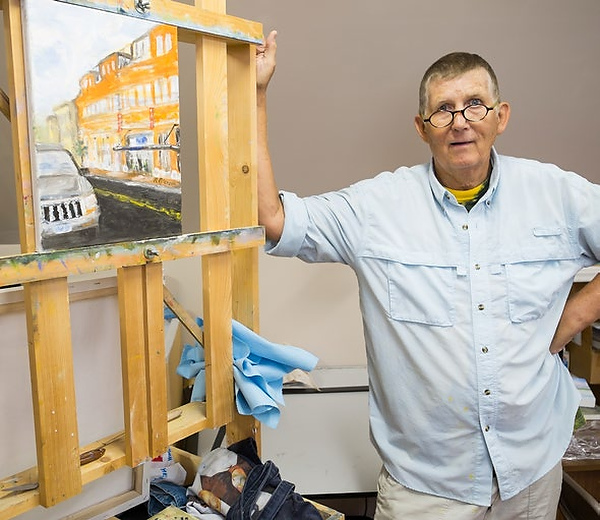 Dick arrived at Charlie’s house to watch him paint, but Charlie had another plan. He had an easel waiting for Dick and a photograph of a barn for him to copy and paint. Charlie remembered what it was like to be a beginner, having learned to paint under the tutelage of the late Frank Rowland, a beloved mentor. Dick completed a “rudimentary painting,” and thus began the painting sessions that now occur weekly, cancelled only in the event of visits from grandchildren or far-flung travels.

One Friday afternoon I arrive to watch them paint. Charlie is trying, with some consternation, to paint a shaft of sunlight, its rays illuminating a forest. He decides to employ a dry brush and gets “just the effect I was looking for.” Dick is working on a beach scene of a deck with stairs leading to sand dunes and the sea.

I’m taken aback by how quietly they work. “Shades of gray are the colors I see;” Billy Joel’s music is piped into the room, followed by the greatest hits of Elton John. Charlie and Dick stop to study Dick’s painting. “Put a dark value back here to make that area pop,” Charlie says, pointing to the sand dune. 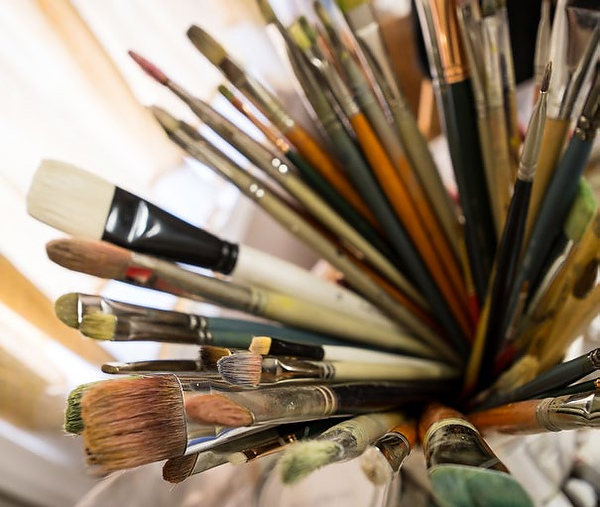 “Your painting should have light values and dark values, and that’s what gives your painting depth,” Charlie says.

“Like life?” I ask, failing to remain mum as planned.

Dick says, “You’ve got to have some dark moments so you can appreciate the light ones.”

Dick works on his painting awhile.

“It looks a lot better than when I started,” he says. 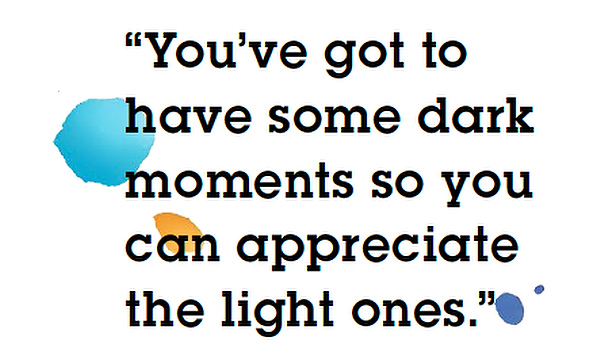 While Charlie is quick to tell a story or deliver the perfectly timed quip, he is not in the least inclined to tell me about his sacred conversations with Dick. I had tried to interview the two men in the spring, but Charlie said Dick was away in Sarasota for three months because of “a medical issue.” He clammed up about that issue through most of the summer.

Eventually Dick returned from Florida, and I met him in June. I talked to the buddies several times throughout the summer and watched them paint together on that Friday in early August. All along I knew there was one conversation I needed to have with Dick, alone.

I telephoned him in late August when he was on the road to a painting workshop in Maine. “I have prostate cancer. I was diagnosed at 49,” he tells me. “They thought it had spread, and there were some dark moments.” There have been scares through the years: “It was almost certain to come back, and it did.” To address the latest diagnosis, he went to Sarasota for three months of radiation.

When he first learned of his cancer years ago, he says, “the fact occurred to me if there are things you want to accomplish, you better start to focus on those. Cancer wound up enhancing my life to a large degree. I started to make more conscious plans. It puts life in perspective.” 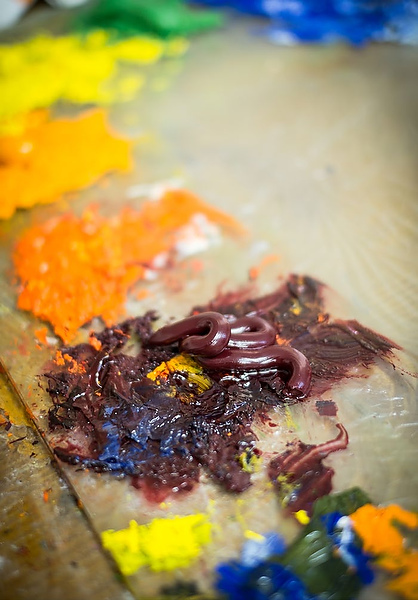 And then he turns to the subject of Charlie.

“Hanging with Charlie — it’s much more than painting. I mean, I could paint with anybody. We were friends. We were fraternity brothers.” He goes on: “You have cancer and you can’t share it with everybody. You can’t share your inner thoughts with everybody, but you can with a good friend like Charlie. … The older you get the more experiences you have with illness, with death. I feel like when I share some of that with Charlie, it resonates with him. He listens, and he gives me good feedback. Having a good friend like Charlie is important to me, and hopefully I’ve served that purpose for him, too.”

I call Charlie a few days later and tell him about my conversation with Dick. “It’s funny when you’re building those friendships in college, a lot of those friendships you carry through life. But you don’t get nearly as close … unless you know them later in life and really get to the guts of the matter and the person. And that’s the way it’s been with Dick and me.” 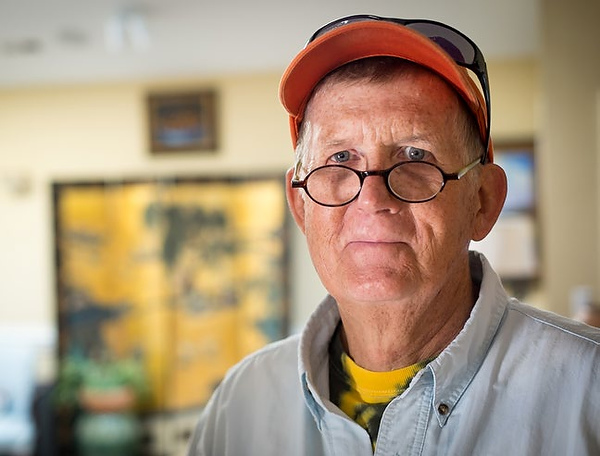 When Dick shared the news about his cancer a few years ago, Charlie was moved by the confidence Dick placed in him but was struck more by the way Dick lived all-out with the diagnosis. “Life hands you a bucket of rotten lemons,” Charlie says, “and it’s up to you whether you’re going to take the action to make it into lemonade or not. When I’m with Dick I see lemonade all the time. Life has handed him a real challenge with this cancer, and he has moved on.”

As Charlie sees it, there is a larger plan at work. “When you’re suffering — no matter the degree of it, no matter what kind — you want to have somebody with a hand on your shoulder saying, ‘I understand. I’m here with you, and if you need me I’m right here.’ I just think that’s why we’re all put here. …”

“Yeah, we were college roommates, but we’re a lot closer than we ever were in college. … Our really deep friendship has developed since painting. Painting is an excuse for us to get together.”

Dick has been away in the Northeast for nine days and won’t return until the following week. Charlie has been missing him and their conversations. Charlie says, “I know exactly what’s going to happen. He’s going to come over with his canvas and all his brushes and paints and we’ll never make it upstairs.”

Charlie’s 50th reunion at Broughton High School. The painting workshop in Maine. The Demon Deacons football season. There will be ever so much to talk about.