Wake Forest University and Wake Forest Baptist Medical Center will significantly increase their impact on the region, the nation and the world by investing $1 billion over the next five years to strengthen and renew their ability to carry out their respective missions. With the help of alumni, parents and friends, the University will invest $600 million in students, faculty and enhancements to campus life. Wake Forest Baptist will invest $400 million in its mission of patient care, research and education. The announcement came under a big tent on Manchester Plaza erected for the occasion last Oct. 18 and was punctuated by fireworks over Reynolda Hall. 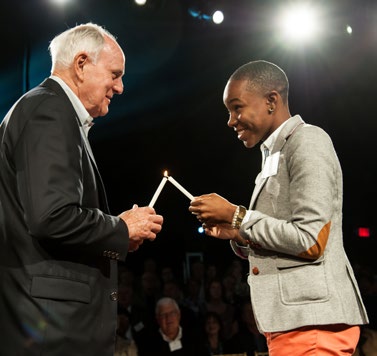 From the Oct. 18 campaign launch

“Wake Will: The Campaign for Wake Forest” represents the largest mobilization of support for the University mission in the institution’s 179-year history. By autumn, the University had raised approximately $315 million toward its $600 million goal. Wake Forest Baptist had raised more than $133 million and will publicly launch its complementary campaign once half of its $400 million goal has been reached. 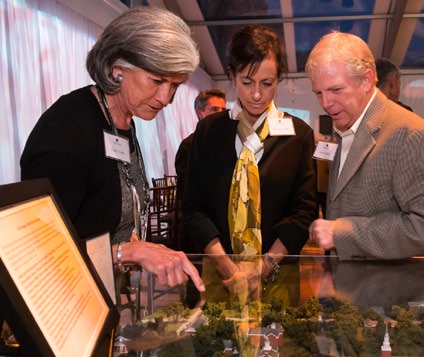 From the Oct. 18 campaign launch

Approximately 400 campaign volunteers, donors, alumni and friends gathered to celebrate the public announcement of the campaign and recognize the importance of philanthropy to the success of Wake Forest. The next day continued the celebration at the tent with announcements and a cookout for faculty, staff, students and alumni who had arrived early for Homecoming.

“Wake Will is our promise to prepare students to lead lives that matter,” said President Nathan O. Hatch.

Wake Forest will fund several initiatives over the course of the campaign, investing:

• More than $190 million in student scholarships and debt relief

• More than $130 million in endowed faculty chairs, professorships and resources necessary to attract and retain top talent; and

• More than $280 million in world-class facilities and faculty and student programming. 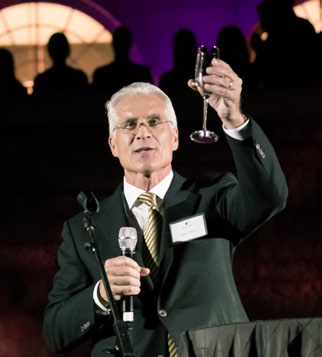 Don Flow (MBA ’83), chairman and CEO of the Flow Companies based in Winston-Salem, chairs Wake Forest’s board of trustees and also serves as the chair of the campaign. “Now is the time to celebrate and grow the culture of philanthropy that makes the Wake Forest experience possible,” said Flow. “With the help of alumni, parents and friends, Wake Forest will create opportunity, educate the whole person and inspire excellence for generations to come.”