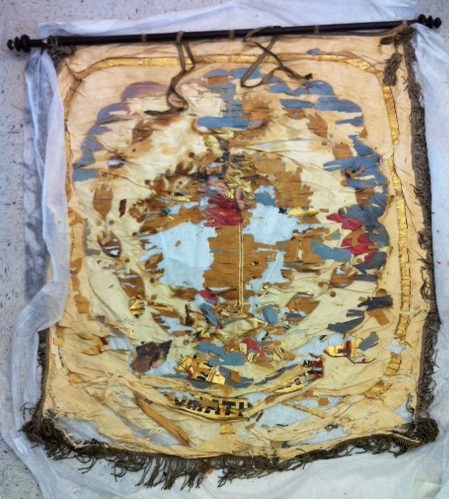 When librarians discovered a tattered banner rolled up in butcher paper in a storage room in the Z. Smith Reynolds Library, they weren’t quite sure what they’d found.

The silk banner was clearly old, reminding archivist Tanya Zanish-Belcher of a Civil War banner. But it was in such poor condition that it was impossible to tell what it was.

It remained a mystery until Zanish-Belcher — along with fellow archivists Vicki Johnson and Rebecca Petersen — visited the Wake Forest Historical Museum near the Old Campus in Wake Forest, N.C. In an exhibit on the history of the Philomathesian and Euzelian literary societies, they noticed a photograph of the Euzelian Society’s meeting room taken in the early 1900s. The photograph showed a banner hanging above the presiding officer’s chair. 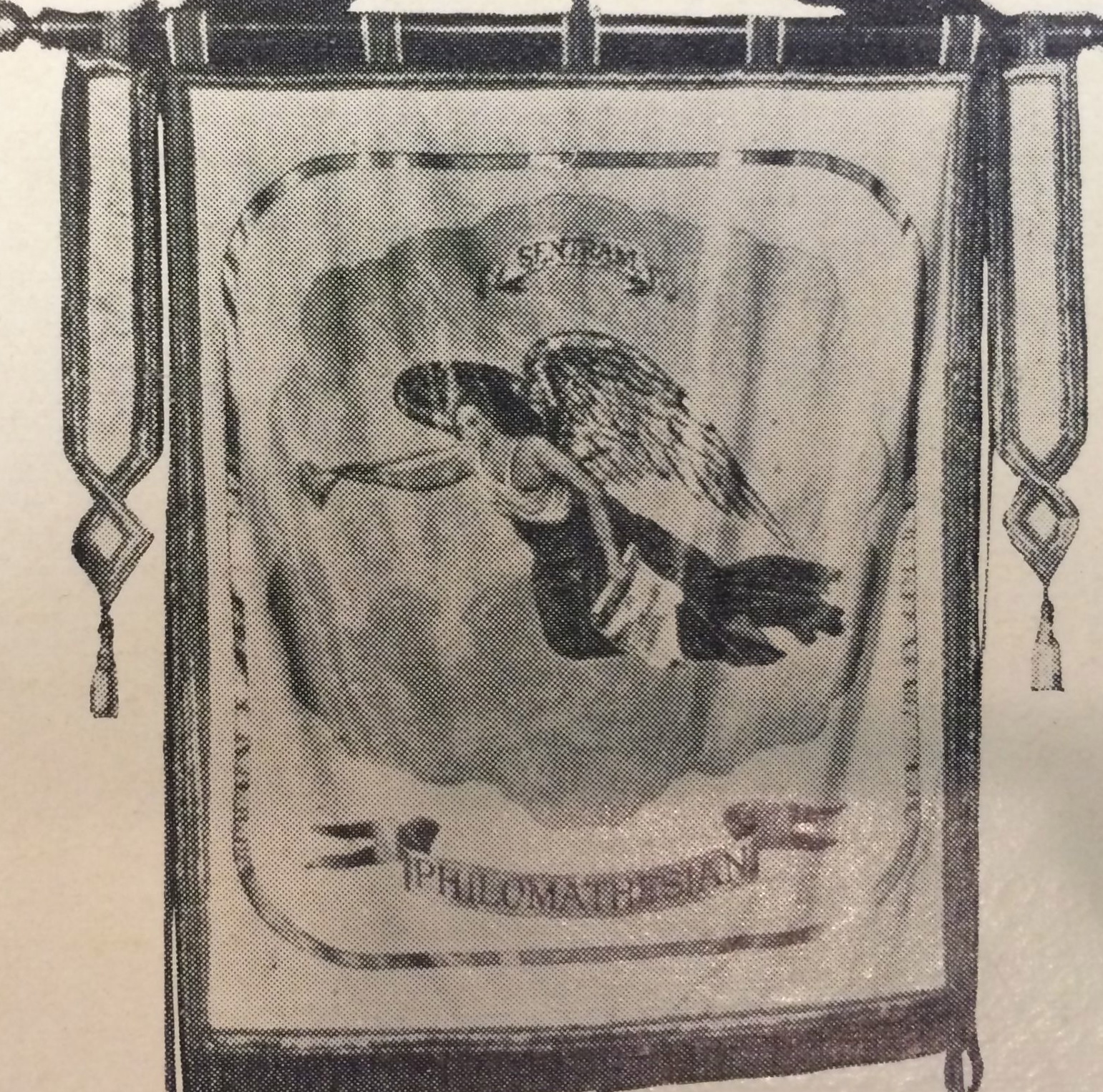 Philomathesian banner from the 1909 Howler

When they saw the Euzelian banner, they realized that the banner in their storage room was similar, Zanish-Belcher said. After comparing it to an early 1900s photograph of the Philomathesian banner, they concluded that they had probably found the “Phi” banner; you can still see the letters “OMATH,” part of the name Philomathesian, as well as splotches of blue that once made up the sky in the banner.

The banner probably dates to the mid-1850s. “It’s a tangible object from Wake Forest’s past,” said Zanish-Belcher, director of Special Collections and Archives.

Because of its historical significance, the banner has been named an “endangered artifact” by the North Carolina Preservation Consortium. The consortium promotes efforts to preserve historical artifacts across the state. 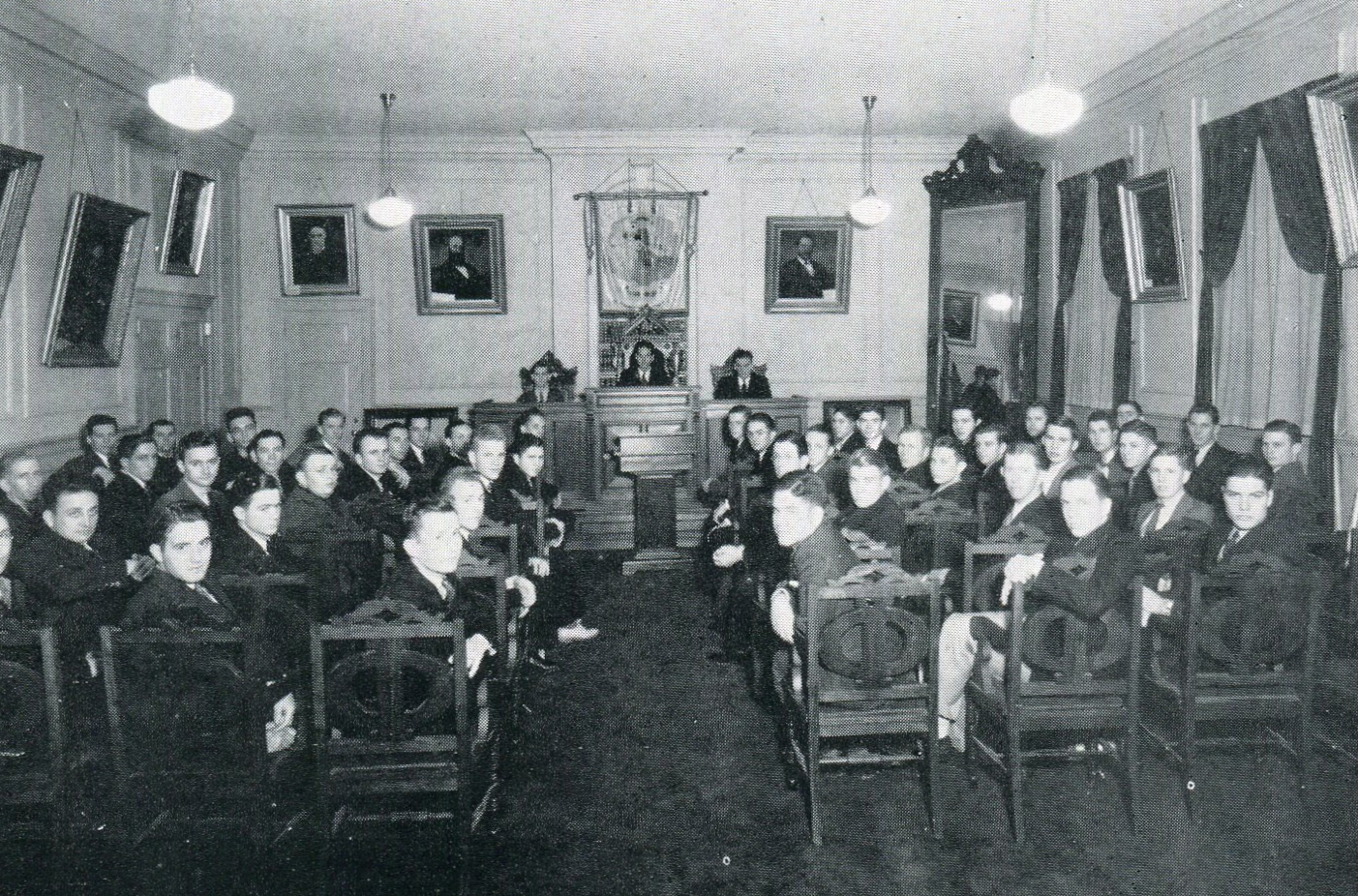 The Philomathesian and the Euzelian societies were the center of student life from Wake Forest’s earliest days until the early 1900s; almost every student was a Phi or Eu. The societies met weekly in richly decorated halls with expensive carpets and draperies and specially made chairs.

The societies’ banners were unveiled at a festive celebration July 4, 1835, according to George W. Paschal’s “History of Wake Forest College, volume 1.” The Philomathesian banner featured “an angel bursting from the clouds and flying over the earth, a trumpet in his mouth and a scroll in his hand,” Paschal wrote.

It was a grand occasion, an unidentified observer wrote in the Raleigh Register, according to Paschal: “The banner … fluttered in the breeze. As I looked on its satin folds, with its golden emblems glittering in the sunbeams, and read its unpretending motto, ‘Esse quam videri malo’ (to be, rather than to seem). I could not help feeling a deep interest in the welfare of the youthful army.” 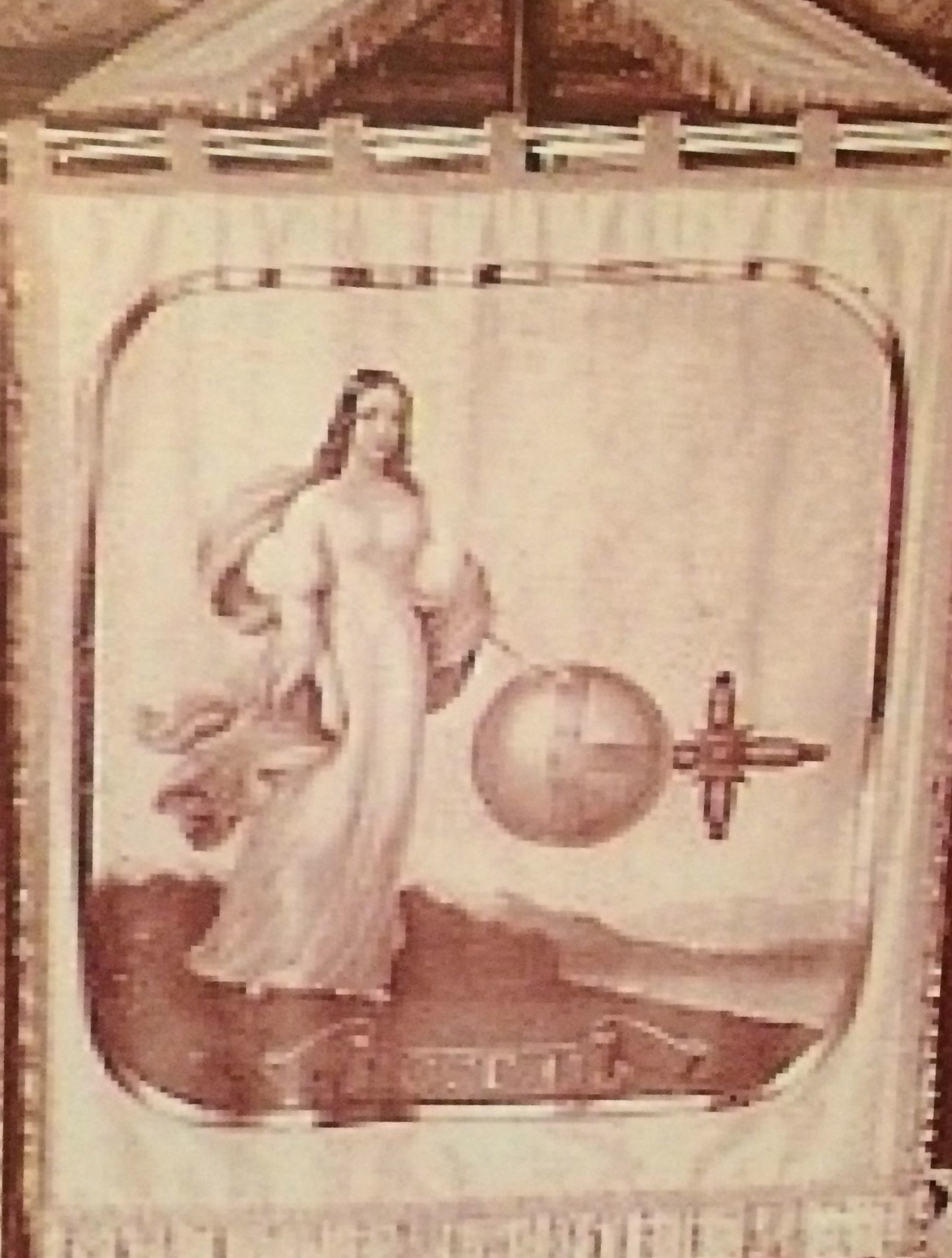 Zanish-Belcher and Ed Morris, executive director of the Wake Forest Historical Museum and Wake Forest College Birthplace, agree that the recently discovered banner probably isn’t the original one made in 1835. New banners were made several years later and again in 1857, based on the original designs. The Euzelian banner was lost in a 1934 fire. The Philomathesian banner, “much worn,” was in storage at the time Paschal wrote the “History of Wake Forest College” in 1935. It’s that 1857 banner that Zanish-Belcher thinks she has found.

“This banner is one of the earliest artifacts representing the history of Wake Forest,” she said. “Its preservation provides many opportunities for bringing together generations of alumni … as well as the Birthplace Museum in the town of Wake Forest.”

For more information on the Philomathesian banner, contact Tanya Zanish-Belcher at zanisht@nullwfu.edu. If you would like to support the preservation of the banner, donations may be made to the Z. Smith Reynolds Library (note “Banner” in the memo line) and sent to: Susan Sharpless Smith, Associate Dean, Z. Smith Reynolds Library, P.O. Box 7777, Winston-Salem, NC 27109.