From his office at Arlington National Cemetery, Col. John C. “Jay” Waters (’87) can see rows of white headstones spreading across the green hills of what is to many the most-recognized sacred ground in America.

On any given day he may hear the solemn strain of a bugler playing “Taps” or witness a folded flag being presented to a veteran’s family member.

The sights and sounds of the country’s largest military cemetery are, to Waters, both sobering and uplifting. “If you ever feel sorry for yourself you just have to go out and look at the headstones or see a family, and whatever your issue of the day is, it puts it into perspective,” he said.

As executive officer for the Army National Military Cemeteries (ANMC) program, Waters’ job is to ensure that Arlington — as well as the nation’s 39 other military cemeteries for which the Army is responsible — honor and respect the fallen and their families according to the highest standards. 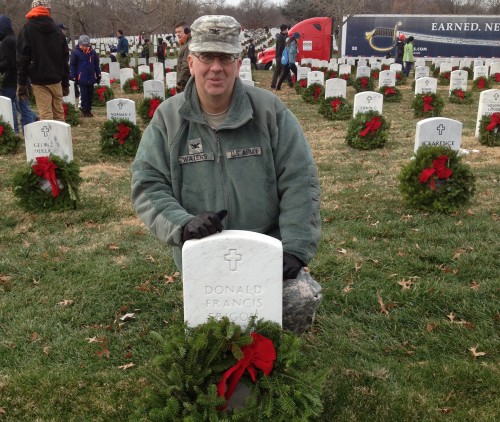 Col. Waters places a holiday wreath at a gravesite in Arlington National Cemetery.

“I never thought I’d be working in a cemetery,” said Waters, who has served his country for 27 years at bases in Texas and Maine, as well as abroad in Italy, Iraq, Afghanistan and multiple humanitarian aid deployments to Rwanda and Liberia. “This place is solemn and sacred,” he said. “I have colleagues who are buried here. Everybody takes their commitment and work environment very seriously.”

Waters came from New Jersey to Wake Forest on a ROTC scholarship and majored in economics. He fondly remembers the commissioning ceremony at Commencement (“Under the big trees”) when he and fellow second lieutenants officially joined the Army. Back then he thought he’d serve five years and see what happened, but the military turned out to be a career commitment during which he has risen in the ranks.

He began his cemeteries program assignment last June and oversees policy, procedure and regulatory guidance at not only Arlington and the Soldiers’ and Airmens’ Home cemeteries in the Washington, D.C., area, but also at 38 smaller, less well-known cemeteries nationwide including those at Army posts and eight for prisoners of war.

Waters is responsible for a training and certification program that will bring officials representing smaller cemeteries to Arlington, where they will learn best practices and how to implement them. He also directs an organizational inspection program in which he and other military and civilian personnel travel to post cemeteries and take a “train, assist and inspect” approach, and he is in charge of graveside accountability and quality assurance. 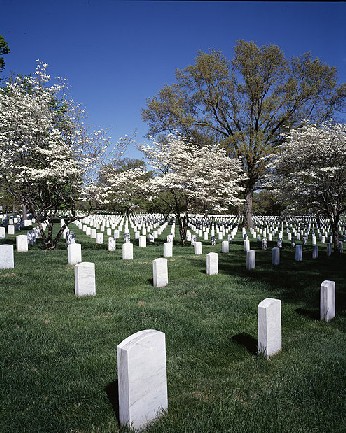 The cemeteries program includes a lot of behind-the-scenes things that sound small, he said, but are profoundly important to veterans and their families, such as taking photos of headstones (front and back) and posting them on the Arlington website. “A family may come from North Dakota and may never get a chance to come back,” said Waters. “We make sure the photo is taken and posted to the web page so that the family that can’t physically be here can still view the gravesite and have a virtual connection. I can think of no greater honor than to serve veterans and their families through the cemetery program.”

Waters lives in Alexandria, Va., with his wife, Anna (whom he met in Italy) and their three children, who attended Italian public schools and speak the language fluently.

Reminiscing about Wake Forest, he said he wanted to get farther away from the Northeast and Wake was his first choice. It was a decision that continues to benefit his military career. “Wake taught me the way to think, the way to interact with people to make connections,” he said. “When dealing with other countries and cultures, you actually end up having relationships with groups of people or individuals, not the other country. I carry what I learned with me and try to make that connection. I’m proud to say I went to Wake.”