Theatre major Kate Lambert (’03) is a member of a Chicago comedy troupe called The Katydids, whose members (names are all a variation of Kate) will star in a pilot show for TV Land called “Teachers.” Wake Forest Magazine invited Kate to talk about the project.

Tell us about “Teachers” and how it evolved.

“Teachers” originally began as a web series. The Katydids (Caitlin Barlow, Katy Colloton, Cate Freedman, Katie O’Brien, Katie Thomas, and myself) are a comedy group in Chicago that performs improv, sketch and also did videos together. Matt Miller, a director in Chicago, approached us with the idea of a web series about teachers. We each created our own characters and began writing. We filmed the web series in summer 2012.

“Teachers” is about six elementary school teachers who want to do a good job but their personal lives keep getting in the way. My character, Caroline Watson, is a total perfectionist who strives to be put-together but just went through a bad breakup that has decimated her. In one episode, she enlists the kids to help her analyze her ex-boyfriend’s Facebook page by going through photos he has posted of him and another woman by playing the game “Friends or More Than Friends?”

The pilot (watch a sizzle reel) is executive-produced by Alison Brie of “Mad Men” and “Community.” We are very excited and just can’t wait to get started. 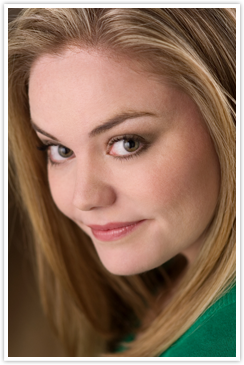 Is it kind of improv TV?

The Katydids began as an improv group so we all have extensive improv training. Individually, we have trained at places like The Second City and iO (formerly improv Olympic), so we love to improvise. The web series was a combination of scripted webisodes and ones that we improvised. The group is made up of six women and each woman’s sense of humor really complements the rest of the group. We wrote what we found funny and we are just so glad that other people liked it too.

How long have The Katydids been together?

I believe the first time we performed together was in 2009. We originally began as an improv group. Caitlin Barlow had the idea to put together a group of women who all had variations of the name Kate. It was supposed to be a fun, possibly one-time show, and some of us shook hands for the first time before we walked onstage together.

But the first show was so much fun and went so well that we all realized that there was something really special about this group and decided to pursue it. We eventually got runs at other theatres in Chicago and started doing sketch and produced a number of videos that have been on sites like The Huffington Post, MTV, Perez Hilton and The Onion.

What about Wake Forest inspired you?

I majored in theatre and was always at Scales. I loved the theatre department there so much. The professors were so incredible and a theatre major leaves with a really well-rounded education because you have experience with design and production in addition to acting.

I did comedic plays, but my focus was not on comedy even though I always loved doing it. I just really wanted to be out there acting and performing, and I feel so lucky to be doing that now.